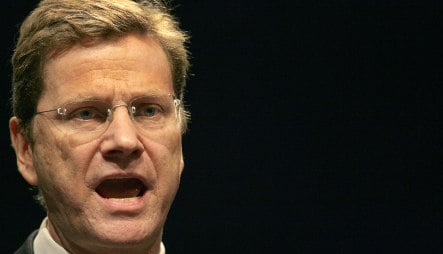 With the pro-business FDP party on track to take the troubled Social Democratic Party’s (SPD) place as the coalition partner of Merkel’s conservative Christian Democrats (CDU) in 2009, Westerwelle would be up for the Foreign Ministry post, which is traditionally manned by the head of the junior party.

He was in the same position during the 2005 general election, but critics said he was too inexperienced for the role. But Westerwelle, who would be the first openly homosexual to lead the German Foreign Ministry, told this week’s edition of newsmagazine Stern he was ready for the job.

“If I didn’t believe I was capable of the position, I would not have been allowed to head the FDP,” he said. “The great majority of the population has absolutely no problem with my private life. It would be good if our foreign policy would bring this spirit of German tolerance to other countries.”

The 46-year-old said he would advocate cutting German aid to countries that treat women as second class citizens or “where men and women are executed only because they are homosexual.”

In a poll released by Stern on Wednesday, the CDU and the FDP together garnered 50 percent of voter support. However, even if his party does not become the conservatives’ coalition partner, Westerwelle told the magazine he would not give up on politics.