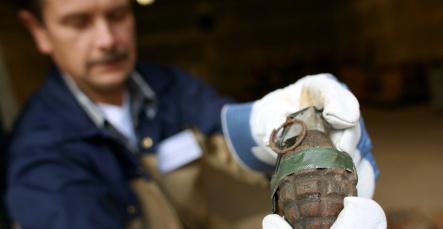 A file photo of a WWII grenade clean up. Photo: DPA

The 63-year-old man deposited the plastic bag on the grass in front of the police station in the eastern German town before telling officers inside he had found something that looked like an old grenade while cleaning up his garden, according to a police report.

Police personnel immediately blocked off the surrounding streets and called in Uwe Heller from the weapons disposal squad. He discovered that the 23-centimetre-long metal object was indeed a 7.5-calibre-grenade from World War II, German made, whose fuse had jammed when it was fired.

After about two hours, police opened the surrounding streets to traffic and are now pursuing charges against the grenade finder. German law prohibits the sale, manufacture or transport of weapons of war without special permission.

More than 60 years after the end of WWII, weapons recovery remains an important task for police and private companies throughout Germany. City-state Berlin and the surrounding state of Brandenburg, where Monday’s grenade was found, were the most heavily bombed during the war.

The entire city of Berlin is considered potentially dangerous by bomb clean-up experts. Allied forces dropped more than 2.7 million tons of explosives across Germany during the WWII, many of which did not explode and become increasingly dangerous with time and corrosion.