EXPLAINED: The fines drivers in Germany need to know about in winter

As the mercury drops below zero in Germany, it's important to make sure your car is fit for driving in colder temperatures. Here are the potential fines drivers can get in the coldest months of the year.

With slippery, icy roads and frosted-over windscreens, winter can be a tricky - and dangerous - time for drivers. But as well as driving carefully in unpredictable weather conditions, there are also numerous ways that drivers in Germany should prepare for a journey in sleet, snow or dim light.

Here's an overview of some of the main ways drivers can fall afoul of the law in winter - and the fines you'll get landed with if you're caught breaking the rules.

In Germany, winter tires are compulsory in wintry conditions, for example, when the roads are slippery due to frost and ice, snow, slush and black ice. Many people follow the October to Easter rule and keep their winter tires on throughout the late autumn, winter and early spring, but the time of year actually has no bearing on the law. If it gets snowy and icy in April or September, for instance, you'd still need to put on winter tires, but they wouldn't be required on a dry day in December.

Nevertheless, the consensus is that winter tires are much safer when temperatures drop below freezing.

If you are caught with summer tires in winter weather, you have to pay €60 and could get a point on your licence. If you obstruct others (for example, because your car breaks down in traffic), the fine increases to €80 and if other road users are endangered, you can be hit with a €100 fine.

If someone else owns the vehicle, they also get a point on their licence and a €75 fine - and there could also be issues with car insurance.

Keeping the engine running to melt ice and snow

It can be tempting to turn on the engine on a chilly morning in order to warm up the inside of the car and melt some of the ice on the outside of the vehicle. However, anyone caught with their engine running while scraping snow and ice off the car could face a €80 fine for causing unnecessary pollution and excess noise.

READ ALSO: REVEALED: The key traffic violations and fines to know about in Germany

Not fully de-icing windscreens and mirrors

According to German law, it's not enough to just scrape a small window out of the frozen pane. Instead, all windows must be cleared of ice and snow over a large area so that visibility is not obstructed.

This also applies to headlights, indicators and rear lights. If any of these are covered, you will be fined €10. A further €5 is charged if ice or snow is covering your licence plate and making it difficult to read.

Leaving snow on the roof or bonnet

It is also essential to sweep snow off the roof and bonnet before driving, since it could potentially blow onto your windscreen during a braking maneuver or slide off your roof and obstruct the vision of the car behind you.

The potential for these dangerous situations to occur means you could face a €25 fine for not clearing snow off your car thoroughly enough.

It's quite common to find seasonal number plate on certain types of vehicles like motorbikes, old timers and motorhomes, which are usually only on the road in warmer weather. 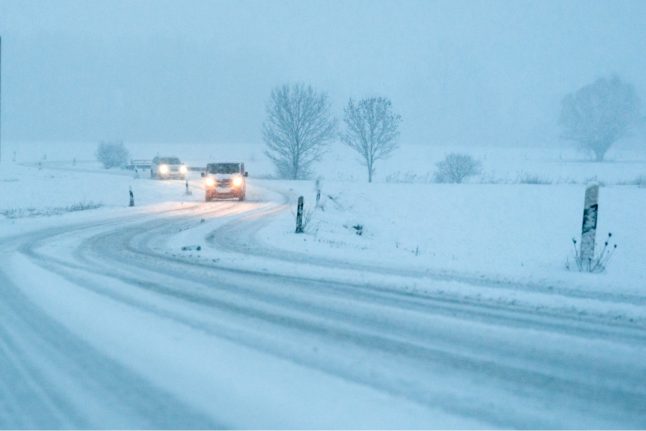 These licence plates are only valid for a certain period of time, which is usually determined by the vehicle owner. To double-check this, look for two small numbers stamped on top of each other on the right-hand side of the licence plate. These numbers stand for the months in which the licence plate is valid - so if 10 and 04 are on there, the plate would be valid from April to October.

Outside of this window, your insurance is suspended and the vehicle can't be driven in public - or parked. If you do, you could be hit with a €40 or €50 fine, and if you get into an accident, the consequences could be even worse.

Forgetting to turn headlights on

Ordinary daytime running lights won't be sufficient in fog, rain or snow. That's because only the headlights are illuminated, but not the rear lights, meaning motorists behind you could have a hard time seeing you.

German law therefore dictates that you have to put your dipped headlights on in wintry weather. If you forget to do this, you will be fined €60 outside of urban areas and also get a point on your licence. In built-up areas, you should expect a fine of €25.