A war in his backyard, galloping economic crisis, and unhappy partners at home and abroad -- German Chancellor Olaf Scholz has weathered unprecedented shocks in his first year, while struggling to make a mark on the global stage.

The ex-finance minister took office on December 8th 2021 promising continuity with the era of Angela Merkel, who ended her 16 years as chancellor a widely respected figure.

But Russia's invasion of Ukraine has forced him to rip up Germany's post-war axioms and chart out new economic, defence and geopolitical directions for the country that prizes -- and is valued for -- its stability and predictability.

"We never before had a government faced with such a dramatically worsening situation, when it came to foreign and security policy, but also of course energy policy," political scientist Ursula Muench told AFP. 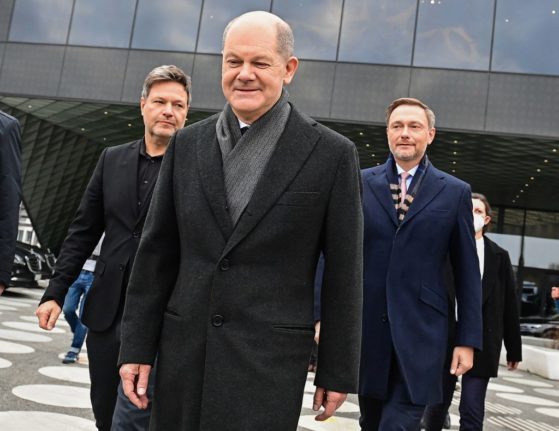 But as Moscow dwindled its energy supplies in the wake of the war, Germany has had to halt its planned nuclear exit, restart mothballed coal power stations while burning through a budgetary hole in a scrum for oil and gas to replace Russian supplies.

And in a turning point for a country whose role on the world stage was still affected by memories of World War II, Scholz announced a historic shift on defence, vowing to re-arm Germany with a massive boost in military spending.

"Going by the dramatic events this year, he did pretty well," said Nils Diederich, a political scientist at Berlin's Free University.

But Rachel Rizzo, a senior fellow at US think tank the Atlantic Council's Europe Center, warned that losing momentum was a danger, even if the initial response was "impressive". 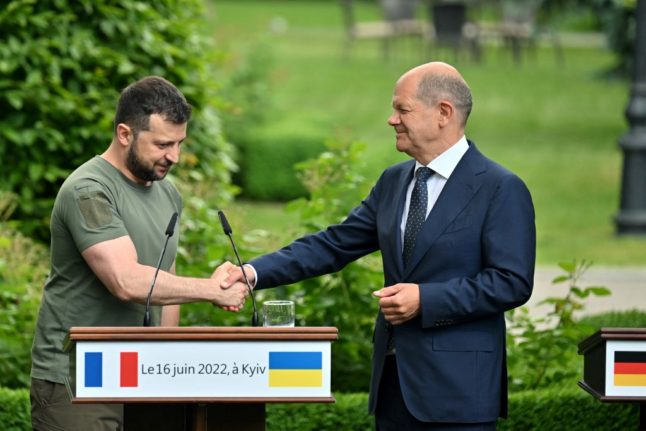 In this file photo taken on June 16, 2022, Ukrainian President Volodymyr Zelensky and Chancellor of Germany Olaf Scholz shake hands after a press conference following their meeting in Mariinsky Palace, in Kyiv. (Photo by Sergei SUPINSKY / AFP)

"I think not being able to follow through with defence and security commitments is a concern," she told AFP.

Not only is Germany trying to replenish its own military stocks, it is facing intense pressure from Ukraine to deliver what it has to help in the fightback against Russia.

The defence spending is high at a time when the treasury is also being pressed to help cushion a price shock fuelled by the energy crisis.

Huge investments are also required for the export giant to manage an economic transformation of reliance on cheap Russian energy or Chinese components to a diversified approach.

And governing in a three-way coalition means resolving each challenge inevitably involves squabbles that could unravel the fragile partnership.

Scholz's government has managed to implement part of its programme, including raising the minimum wage and reforming unemployment benefits.

But with myriad crises not going away, the chancellor's popularity ratings have suffered. 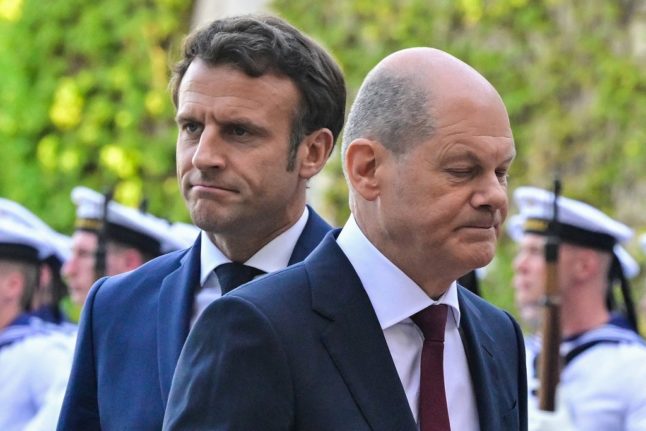 In this file photo taken on May 9, 2022, German Chancellor Olaf Scholz (R) and French President Emmanuel Macron make their way inside after inspecting an honour guard during a welcome ceremony at the Chancellery in Berlin. (Photo by John MACDOUGALL / AFP)

As well as disagreements at home, there have been tensions with partners abroad.

European Union allies were upset that Scholz announced a massive 200-billion-euro ($207-billion) energy fund without first consulting them, complaining he should have focused on coming up with EU-wide measures.

Tensions have also arisen in the key relationship between Berlin and Paris over issues ranging from the energy fund to German plans for defence procurement.

Unlike Merkel, who, in her time, was widely respected as the voice to reckon with in Europe, Scholz has so far failed to step into the role on the international stage.

Merkel's departure "has left a void", said Eric Maurice, from the Brussels office of the Robert Schuman Foundation.

Scholz is "struggling to make his mark at the European level... He is still trying to find his bearings, he does not have Merkel's experience." 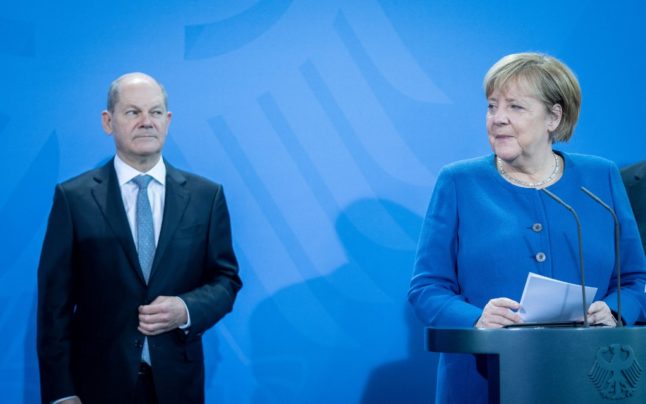 In this file photo taken on November 10, 2021 then outgoing German Chancellor Angela Merkel and then German Finance Minister and Vice-Chancellor Olaf Scholz attend a press conference to present the annual report of the German Council of Economic Experts (Wirtschaftsweise) in Berlin. (Photo by Kay Nietfeld / POOL / AFP)

The view Scholz was seeking to "go it alone" was reinforced when he made the first visit to China by a G7 leader since the start of the pandemic in November, accompanied by a delegation of German business leaders.

As Scholz heads into his second year in the job, many of the open challenges will continue to entangle him.

"Ensuring German competitiveness because of the increase in energy costs, particularly for industries like chemicals and steel manufacturing, is the big challenge for Scholz," she said.

The energy fund "is just a short-term fix. No one knows when energy prices are going to come down to pre-war levels".