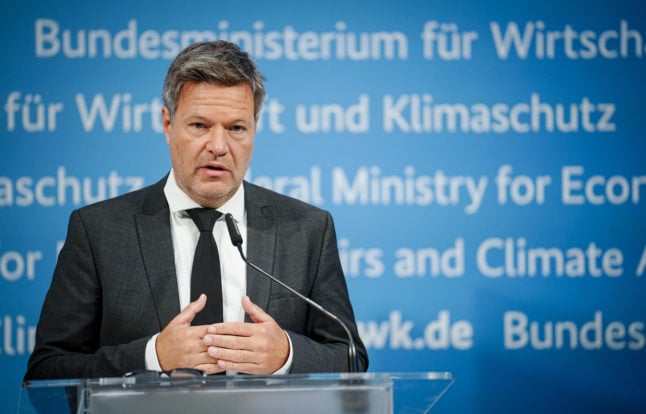 Habeck, from the Greens, singled out the United States in particular, saying it was charging excessive Mondpreise – or ‘moon prices’ – a German expression for an overly high fee or ‘ripoff’.

Before Russia invaded Ukraine in February, Germany sourced 55 percent of its natural gas – which half of German homes use for heat – from Russia.

Now that Russia has shut off deliveries to Germany in retaliation for EU sanctions, Germany has had to turn to suppliers like Norway and temporary liquefied natural gas terminals (LNG) on its north coast to get gas from faraway places like the US and Qatar.

With Europe in general – and Germany in particular – facing an energy crisis this winter and power bills more than doubling, Habeck called on the US to return historical favours.

‘The US approached us when oil prices skyrocketed,’ Habeck told the Neue Osnabrücker Zeitung newspaper. ‘European countries tapped into their national oil reserves as a result. I think such solidarity would also be good for curbing gas prices.’

Habeck also says European countries should band together through the EU to negotiate more favourable gas prices with offshore suppliers, in order to get a better bargain by not bidding against each other.

Other EU countries, however, have blasted Germany for rejecting a Europe-wide gas price gap and planning on moving ahead with its own – a key measure in a new €200 billion spending package announced last week that dwarfs the energy relief supplied by any other European country.

Such a gas price cap would see a maximum amount households would pay for at least a ‘basic level of consumption,’ possibly around 75-80 percent of what the average family uses, with 20-25 percent of consumption allowed to float, in order to incentivise people to save energy.

The government would then be on the hook to pay the difference between the capped level for consumers and the market rate – something that could cost billions in new debt.

The federal government’s expert group says it is working flat out to present ministers with its exact proposal for how a cap should work in practice by the weekend.