The role of European educational institutions in the bolstering of democracy in the face of autocracy and violence is central. And, given the urgency of this terrible situation, the Swedish university sector has been mobilising in different ways to help those affected by the war, with Stockholm University as a prime example.

The day after Russia invaded Ukraine in February, Astrid Söderbergh Widding, the Principal of Stockholm University (SU), made a robust statement in a blog post.

“As a university, we have to stand up for fundamental values ​​such as academic freedom and freedom of expression,” she wrote the day after Russia’s incursion.

“Universities in Ukraine have been forced to close due to the invasion, which of course has serious consequences not only for research and education but for individuals and for society as a whole. At the same time, in war and crisis there is a clear risk of misinformation of various kinds, and it is our task as a university to keep critical thinking high.”

‘We lived ordinary lives but that suddenly changed’

Stockholm University went further. The university pledged its help in assisting Ukrainian academics in any way possible. “Now we are also prepared to assist colleagues and students on the run as best we can – and that risks becoming a reality soon.”

These fears quickly became reality. But Stockholm University stayed true to its promise to help however possible, both at an organisational and personal level.

Ukrainian physicist Lesya Demchenko worked as a postdoctoral fellow in Xiaodong Zou’s research group at Stockholm University’s Department of Materials and Environmental Chemistry in 2005, and they have stayed in touch since.

When Russia invaded Ukraine, Xiaodong Zou and her husband Sven Hovmöller, Professor Emeritus at the same department, contacted Lesya to see if she needed help. If Lesya and her family could reach Sweden, they said, they would offer her a lab place in their department, where she could continue with her research. 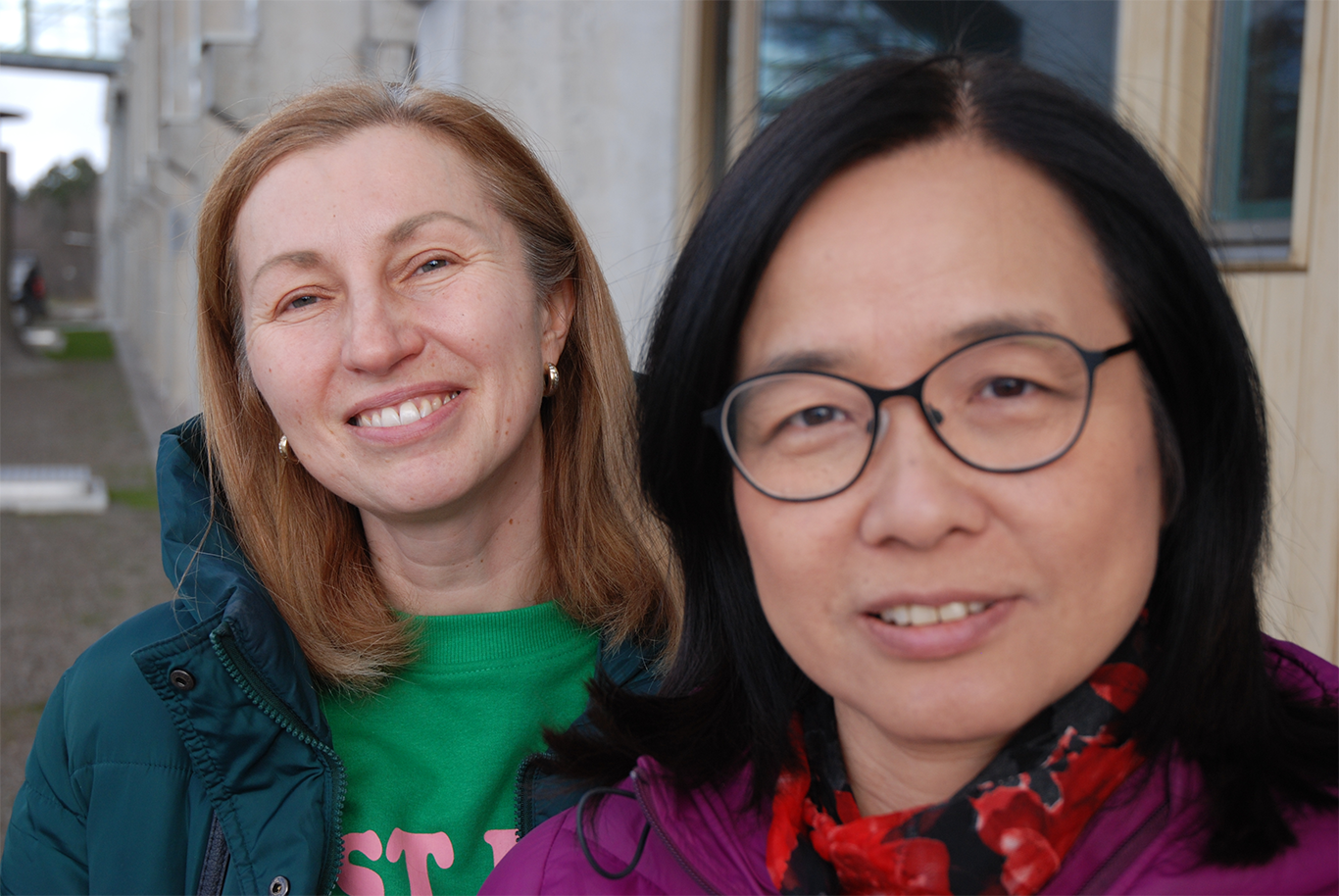 Lesya works at the Technical University of Kyiv, as an associate professor of physics, where she also lectures students. The Russian invasion on February 24 came as a total surprise.

“We lived completely ordinary lives, but suddenly we woke up one day to the awful sound of missiles, alarms and screams,” she says.

Lesya and her family lived in Kyiv, in an apartment on the sixteenth floor, and it quickly became obvious that it was too dangerous to stay. The first night of the invasion they stayed in the basement of the house and then in a parking garage nearby. The family then escaped to their summer cottage just outside Kyiv, but that was in an area close to Russian troops.

“We were very scared all the time; we stayed in the cottage for a little over a week and I could not sleep, could not eat, barely drank water.”

Lesya says that when she used to watch movies about civilians caught up in war, she always wondered why people didn’t just leave as quickly as they could.

When she and her family were in that position, however, she understood the uncertainty and terror of the situation.

“When we found ourselves in danger in a war zone, it was very difficult to know what we would do. We understood that it was dangerous to stay where we were, but at the same time we were also afraid to leave, because who knows what might happen on the road?”

But they finally fled Ukraine by car, heading towards Sweden by travelling through Moldova, Romania, Hungary and Poland. On March 16, Lesya arrived in Nynäshamn in Stockholm county with her husband and two children on a ferry from Poland.

“We could only bring the most important things – some clothes, documents, my laptop, food and water”, says Lesya.

‘It feels fantastic to get started with research again’

Lesya’s family was also helped by SU’s decision to prioritise Ukrainian researchers in the housing queue for researchers and then the Foundation for Strategic Research agreed to provided a grant of 30 million Swedish kroner to Ukrainian researchers. So far, grants have been given to 16 researchers from Ukraine, with Lesya receiving funding from the foundation until the last quarter of 2023.

“It feels fantastic, I long to get started with the research again,” Lesya says.

Lesya’s research is about developing smart metal-based nanocomposite materials with shape memory, which can be used in a variety of applications, in everything from aircraft to medical instruments and dentistry.

“It is interesting to research whether the materials can be used for so many different things as they are often more environmentally friendly than the materials available today – the world really needs these materials.” 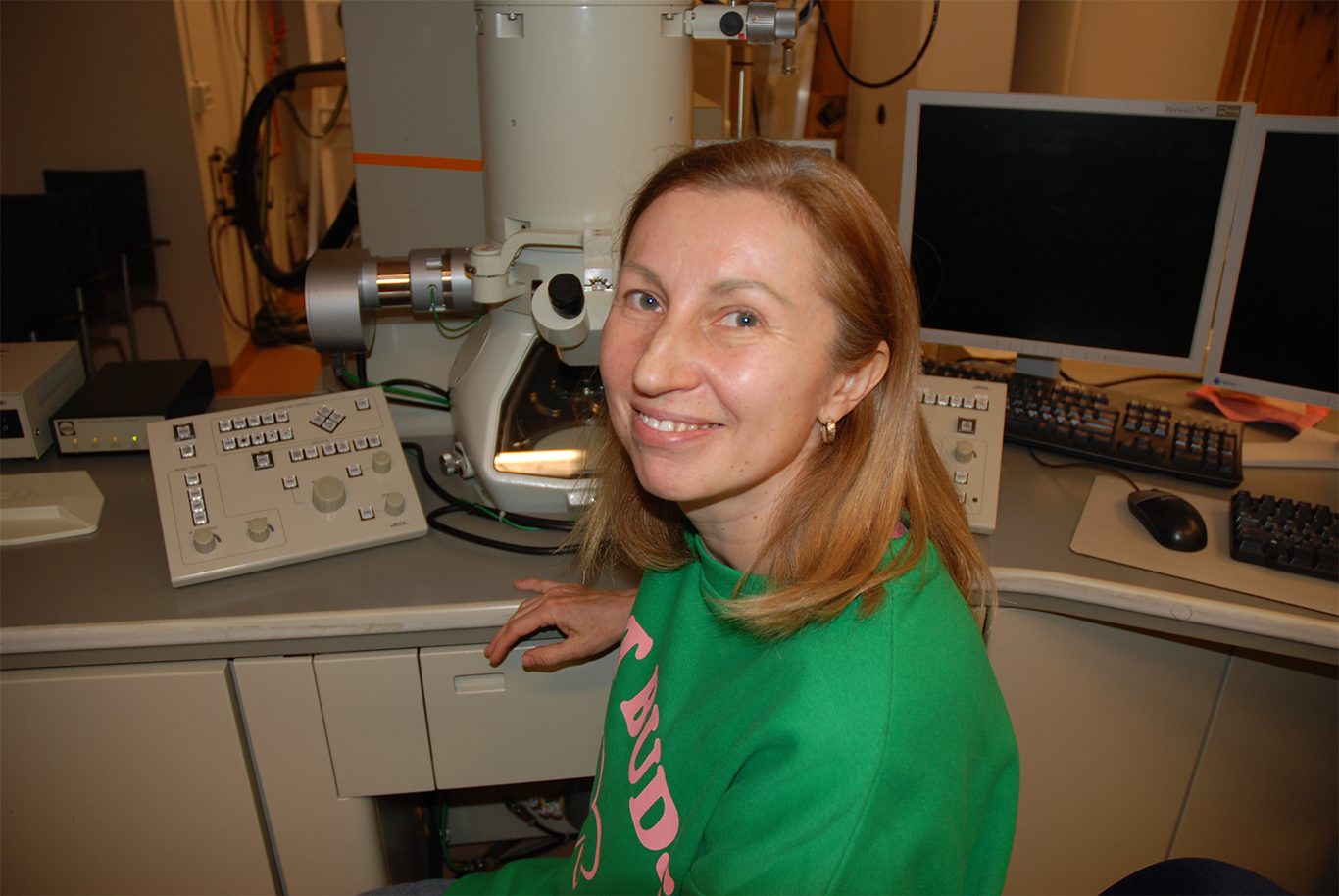 But as well as continuing her research, Lesya has also resumed distance learning for her students at the National Technical University of Ukraine.

“The university building still exists, but obviously it is impossible for everyone to be there. During the pandemic, we learned to work online, so that’s how we are doing it now, too – we are working remotely.”

However, helping Lesya is far from the only positive action Stockholm University has taken in response to the Russian invasion.

For instance, twelve SU chemistry labs have signed up to Labs Supporting Ukrainian Scientists, a worldwide initiative established by the global research community, which has seen more than 500 laboratories across the world offer space to Ukrainian researchers. Stockholm University has also signed up to support the researchers financially. The hope is to be able to directly hire some researchers from Ukraine.

Furthermore, Stockholm University law professor Patricia Shaughnessy has led an initiative to help Ukrainian law students escape the war-torn country and get them into legal internships across Europe, So far, organisers say 32 Ukrainian law students in Stockholm, Dusseldorf, Frankfurt, Berlin, Vienna and Warsaw have secured internships, travel arrangements, and accommodation through the initiative.

The spirited and generous response by universities across the world to the plight of Ukraine after the Russian invasion has been remarkable. They have given many Ukrainian researchers the chance to carry on their work of shedding light on our world, of increasing the sum of knowledge and of extending the boundaries of our understanding.

Truth may be the first casualty of war, but Stockholm University and its staff and students are doing their best to ensure that the wounds suffered are not mortal and that truth can be tended back to full health.

As Lesya says, “​​I can not help my people or my country now. But I can talk about it and tell the world.”