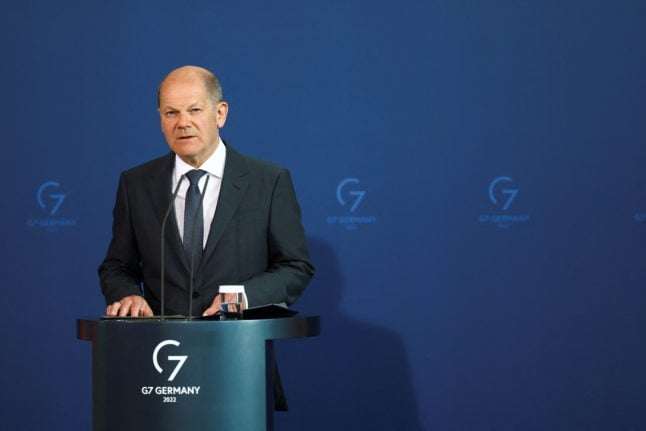 “The killing of thousands of civilians as we have seen is a war crime for which the Russian president bears responsibility,” he said.

“We feel immense grief for the victims and also, it must be said, great anger towards the Russian president and this senseless war.”

Scholz, who is facing growing pressure at home to authorise sending heavy weapons to Ukraine, said a “new phase” had begun in the conflict with Russia’s fresh offensive in eastern Ukraine.

But despite being repeatedly pressed by reporters on the question of sending tanks, fighter jets or other heavy weapons, Scholz remained vague.

The Social Democrat reiterated that NATO would not get involved in the conflict, but said Western allies were united in their resolve to support Ukraine.

Scholz’s government has also pledged more than a billion euros in financial aid for Ukraine so that the government in Kyiv can buy the weapons it needs to fight back.

But Scholz said Germany would not “go it alone” on weapons, and that any decisions would be made in close cooperation with “friends and allies”.

He raised the possibility of eastern European partners sending older, Russia-made “weapons systems” to Ukraine, because these would be familiar to Ukrainian troops and could be used immediately.

He also said Ukraine had been asked to draw up a list of weapons it needs that could possibly be bought from the defence industry directly.

Scholz and his centre-left SPD party have for weeks argued that sending heavy weapons would risk a spiral of escalation that could see other countries attacked.

But mounting reports of atrocities committed against civilians in Ukraine have fuelled calls for Scholz to take a tougher stance, even among his two coalition partners, and growing criticism of his cautious approach.

Calling a press conference to say nothing new, double down on doing too little at a time when most of your voters think you should do more, and hoping no one will notice should henceforth be called “pulling a Scholz.”

MP Anton Hofreiter from the Green party accused the chancellor of failing “to show enough leadership”.

Lawmaker Marie-Agnes Strack-Zimmermann, of the liberal FDP, said Germany should not be guided by fear of escalation, because “Putin is unpredictable anyway”.