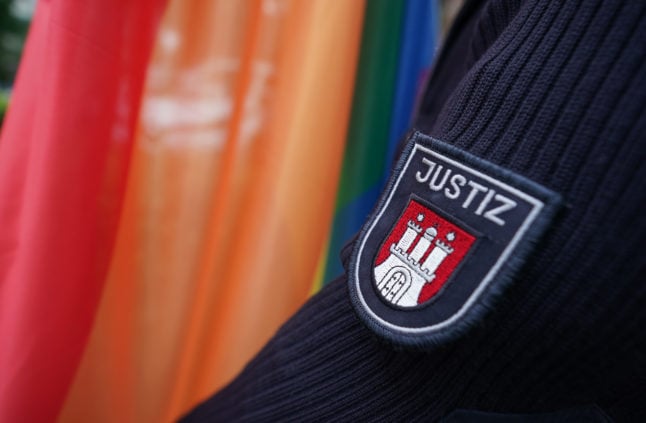 The justice emblem on the sleeve of a correctional officer is seen in front of a rainbow flag. Photo: picture alliance/dpa | Marcus Brandt

At the end of March, police in the city of Herne in North Rhine-Westphalia reported a violent attack by three 12- and 13-year-olds which left the 15-year-old victim in hospital.

What the police didn’t report, however, was the fact that the victim was a trans girl; this only came to light after the victim and her mother gave an interview to RTL news.

According to trans rights activists, this case highlights the fact that the real figure of transphobic attacks is likely to be a lot higher than the official figures show.

In an interview with Taggeschau, Sarah Ponti of the Lesbian and Gay Association in Germany (LSVD) said that transphobic crimes are on the rise and “among queer-hostile crimes, trans-hostile crimes are the most common.”

The fact that there is hardly any research on this issue means that the causes are also unclear; “Does it have to do with a growing visibility of trans people? Or is trans-hostile sentiment on the rise? Or both?” she said.

Ponti also criticised the lack of specific categories for recording trans-hostile violence, which results in difficulties for the police in assigning offences. This would improve, she said, if transphobia were introduced as a subcategory.

A spokesperson from the Federal Ministry of the Interior explained that the subtopic “Gender/Sexual Identity” has been differentiated since the new year.

“Since then, corresponding crimes have been recorded separately in the categories ‘ misogynist,’ ‘anti-male’, and ‘gender diversity,'” a spokesman said.

But there are also other hurdles to overcome. The LSVD spokesperson also pointed out that transphobic hate violence is often not recognised by police or prosecutors because transphobic motives are not mentioned in the relevant criminal laws.

According to Ponti, victims often conceal their attackers’ motives, either out of shame or because they do not trust the police.