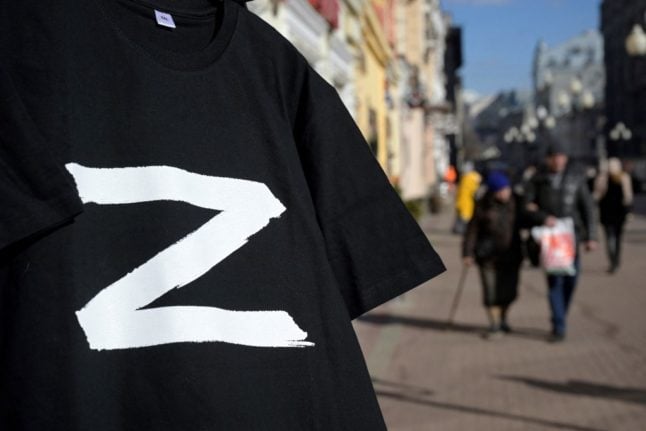 Two German states on Saturday said they have outlawed public displays of the “Z” symbol used by the Russian army in their invasion of Ukraine.

Anyone who brandishes the symbol at demonstrations or paints it on cars or buildings in a show of support for Vladimir Putin’s war could risk up to three years in jail or a fine in Lower Saxony or Bavaria.

“It is incomprehensible to me how this symbol ‘Z’ could be used in our country to condone this crime,” said Lower Saxony’s interior minister Boris Pistorius.

“Z”, a letter that features in the Latin alphabet but not in Cyrillic, first appeared on military vehicles rolling towards Ukraine, possibly to distinguish them from Ukrainian forces and avoid friendly fire.

But the sign has since become ubiquitous on cars on the streets of Moscow, clothing and across social media profiles on the Russian internet — a trend the Russian authorities are eager to encourage.

In the German state of Lower Saxony too, there had been examples of such displays, said the state’s interior ministry.

Bavaria’s Justice Minister Georg Eisenreich noted that freedom of opinion is a “great asset” but it “ends where criminal law begins”.

“Sympathisers who use the symbol ‘Z’ of Russian forces in Bavaria must know that they may be liable to prosecution for approving criminal acts,” he said.

“We will not allow violations of international law to be condoned,” he said.

Germany’s federal prosecutor has opened a probe into suspected war crimes by Russian troops since the invasion of Ukraine.