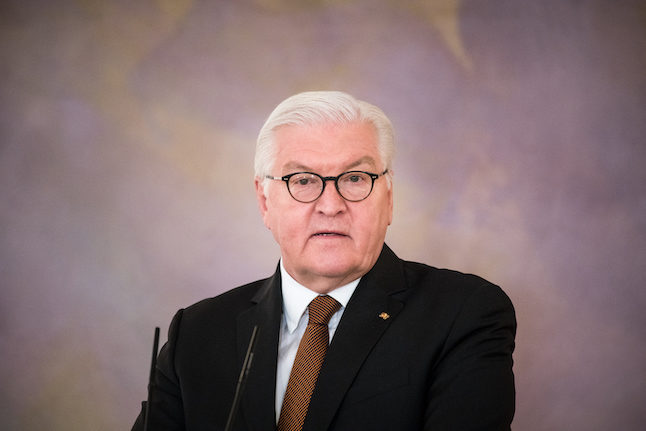 The Social Democrat, 66, served twice as foreign minister in Angela Merkel’s cabinet, stepping back from his duties as Germany’s top diplomat to take on the ceremonial role as head of state in 2017.

With his snowy white hair, round glasses and dimpled smile, the trained lawyer has become one of Germany’s most popular and trusted politicians.

The presidential role was an “honour” and an “enormous challenge” Steinmeier said in May last year when announcing his desire to stay in office until 2027.

The former foreign minister has cast himself as the conscience of the nation, occasionally stepping into political debates and speaking at memorials.

He has repeatedly warned against the rising threat of right-wing extremism in Germany and criticised scenes at Kabul airport after the city’s fall as “shameful for the political West”.

Steinmeier’s time in office has been marked by the outbreak of the coronavirus pandemic in Germany at the start of 2020, with the president sometimes playing the role of a moral arbiter in public debates on health issues.

Earlier this year, Steinmeier held a public debate between health experts and coronavirus vaccine sceptics, a vocal minority in the country that has increasingly taken to the streets to protest against coronavirus rules.

The presidential election, normally held in the Bundestag building, will instead take place at Paul Loebe Haus, a post-modern office complex opposite the Chancellery in central Berlin, in order to meet pandemic distancing requirements.

The president is voted for by the Federal Convention, a one-off assembly made up of MPs and an equal number of state delegates, taking the total number close to 1,500.

Among the delegates are a number of public figures, including the Bayern Munich and German national team midfielder Leon Goretzka, selected by the Bavarian SPD.

With the backing of all the parties in the current coalition government, including Steinmeier’s own Social Democrats, the Greens and the liberal FDP, as well as the support of the opposition conservatives (CDU-CSU), the incumbent is expected to win the vote comfortably.

Three other candidates have been nominated for the role by the far-right AfD, the far-left Linke party and the Freie Waehler, part of the ruling coalition in Bavaria.

Presidents can run for a maximum of two terms in Germany, though Steinmeier, who is expected to secure re-election, would be only the fourth person to do so.

The president’s role in Germany is mostly symbolic, with the office holder acting as a constitutional counterpart to the head of government, currently Chancellor Olaf Scholz, a Social Democrat comrade.