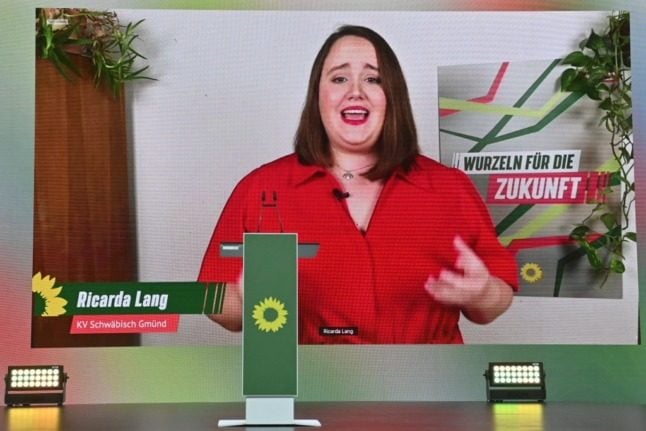 Newly elected co-leader of Germany's Green party Ricarda Lang is seen on a screen as she delivers a speech on video ahead of the vote during the second day of the party's congress in Berlin on January 29th, 2022. (Photo by John MACDOUGALL / AFP)

Feminist Ricarda Lang, 28, and Iranian-born foreign policy expert Omid Nouripour, 46, are taking the reins of the ecologist party as it attempts to keep supporters onside while maintaining a tricky coalition in Berlin.

The Greens and their chancellor candidate Annalena Baerbock scored their highest-ever result in last September’s general election with 14.8 percent of the vote.

But they fell short of even bigger expectations that they could name Angela Merkel’s successor.

The party wound up joining Germany’s first three-way national coalition, under Chancellor Olaf Scholz of the Social Democrats and alongside the pro-business Free Democrats.

Baerbock, now foreign minister, and her Greens co-leader Robert Habeck, the new vice chancellor, have stepped aside as chiefs of the party, whose flagship issue is fighting climate change.

‘Fairness’
Lang has become a rising star in German politics since being elected as a lawmaker last year and is now one of the youngest party leaders in post-war history.

Speaking just after her election, she promised to link protecting the environment to social progress.

The climate crisis “is particularly hitting those who have the least”, she said.

Hailing from a small town in Baden-Wuerttemberg, Germany’s only Greens-led state, Lang joined the party at 18 and became its deputy leader in November 2019 as well as its spokeswoman on women’s affairs.

Before entering politics, the daughter of a single mother broke off her law studies to become a social worker in a home for abused women.

Coming to see government as the place to exact systemic change, she took over the leadership of the Greens’ youth group from 2017 to 2019.

“I believe in fairness,” she told local media, “so that people like my mother can have it easier in the future.”

The Greens traditionally strive for gender balance in the leadership, and chose a pragmatist and an idealist, in this case Lang, at the top.

As an outspoken, openly bisexual woman in the public eye, Lang has faced a deluge of hate speech online, the most egregious of which she has fought with criminal complaints.

She has pledged to keep the party’s often unruly ranks loyal “by making the Green profile apparent and ever stronger” even as it forges the compromises necessary to keep the coalition in Berlin together. Newly elected co-leader of The Green Party  Omid Nouripour speaks after the vote during the second day of the party’s congress in Berlin on January 29th, 2022. (Photo by John MACDOUGALL / AFP)
‘Organic kebabs’
Omid Nouripour, who was born in Tehran in 1975, has made his name chiefly on foreign policy in debates in the Bundestag, where he has served as an MP for over 15 years.

Particularly after its relative success of last year’s election, he has said he wants to keep the party firmly in the mainstream while tending to its activist roots.

“We will become the leading force of the centre-left in Germany,” he has pledged.

That includes keeping its eyes on the top prize — the chancellery — in the 2025 election, he said Saturday.

And that can only work, he argues, “if we think beyond the day-to-day of governing” with the Social Democrats and the FDP.

Nouripour has strived to sharpen the Green profile on human rights, calling most recently for a diplomatic boycott of the Winter Olympics in Beijing.

He strongly criticised Merkel while still in office for speaking directly to Belarusian strongman Alexander Lukashenko by telephone, calling it a “disastrous signal”.

Nouripour moved with his family as refugees from Iran to Germany in 1988 and started school in Frankfurt as a teenager.

After breaking off his studies in philosophy and law, Nouripour stood for parliament, winning the seat of Joschka Fischer when the Greens grandee left politics in 2006.

The avid football supporter and observant Muslim has won fans for his playful approach to multiculturalism, not least in a 2009 campaign video rapping about more renewable energy and “organic kofta kebabs for everyone”.

The Chancellor said he would be attending the EU summit at the end of May “with the clear message that the Western Balkans belong in the European Union”.

Meanwhile, Germany said it would contribute one billion euros to shore up the Ukrainian government’s finances, as G7 ministers met to discuss further support for Kyiv in the face of the Russian invasion.

The G7 were coordinating “commitments to finance the government functions of the Ukraine”, German Finance Minister Christian Lindner said at a press conference following the first day of the meeting in Germany.

Germany “will make one billion euros available to the Ukrainians in grants,” Lindner said, in addition to a $7.5-billion pledge from the United
States in the process of being approved by legislators.

Lindner said he expected “further steps forward” to be made before the end of the meeting on Friday.

The war has blown a hole in Ukraine’s finances, with tax revenue having fallen sharply.

Kyiv needed a “double-digit billion euro” figure to keep essential services going, Lindner said earlier in the day ahead of the meeting in Königswinter, near Bonn.