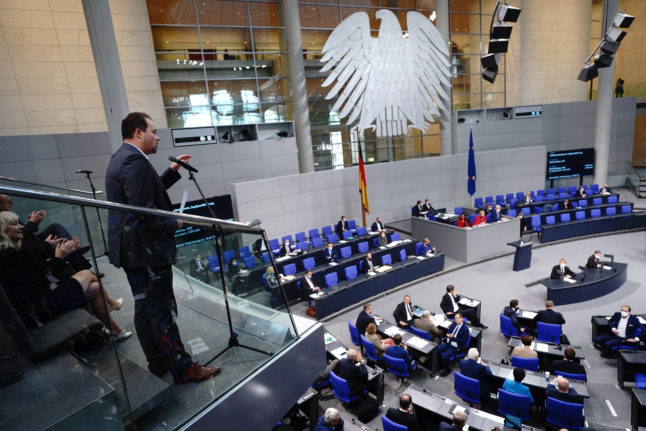 According to reports in Zeit, and other German media, MPs working in the German Bundestag can use their Covid ‘recovered’ status for up to six months in the debating chamber of the Bundestag.

A parliamentary spokesperson told the news site that the law that dictated the Covid rules in the federal parliament referred to the Covid-19 Protective Measures Exemption Ordinance.

“At the time the general order was issued, it provided for the period of 28 days to six months after infection, which continues to apply,” they confirmed.

Since January 15th, the period of time in which somebody counts as ‘recovered’ from Covid has been halved from six months to three for the general public.

The rule change has meant that many unvaccinated people have suddenly found themselves relying on negative tests in order to access ‘3G’ venues, in which proof of vaccination, recovery or a negative test must be presented, or 2G venues, which are restricted to people who are vaccinated and recovered.

Had the same rule applied to the Bundestag, the change in the recovered status would have had a particular impact on MPs in the far-right Alternative for Germany (AfD) party, many of whom are either unvaccinated or prefer not to discuss their vaccination status in public.

In the plenary hall, where debates and votes take place, the 2G-plus rule applies, meaning MPs who are neither vaccinated nor recently recovered have to sit in the visitors’ gallery.

Recently, more than 20 AfD MPs moved to this part of the Bundestag, which has been nicknamed the “epidemic gallery” due to the fact that a number of anti-vaccination politicians currently sit there.

Under the current Bundestag rules, both still qualify as ‘recovered’, though Chrupulla would be excluded from the category in most other workplaces and public spaces in Germany due to the fact that his positive PCR test was taken more than 90 days ago.