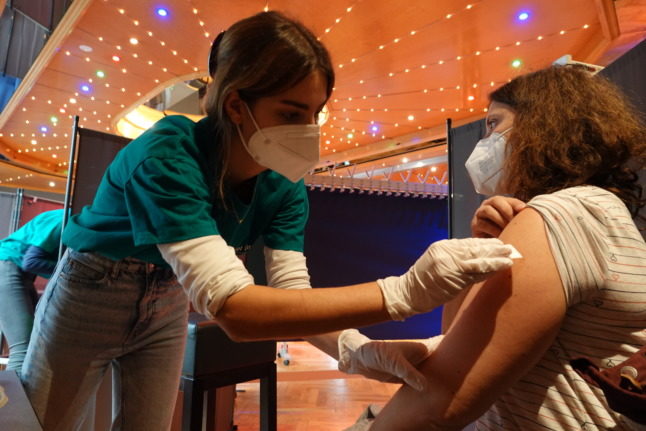 A helper dabs the arm of a patient with disinfectant at a pop-up Covid vaccination centre in a dance school in Cologne. Photo: picture alliance/dpa | Mona Wenisch

On Monday, teenagers in Rheinland-Palatinate, North Rhine-Westphalia, and Baden-Württemberg started lining up for their Covid-19 booster shots, despite the country’s Standing Committee on Vaccination (Stiko) currently not recommending boosters for most people aged 12-17.

Following federal Health Minister Karl Lauterbach’s green light for state governments to give boosters to teenagers if they choose to, vaccines have now been made available for 12-17 year-olds in select locations in these western states, such as the Gelsenkirchen Impfzentrum.

In order to get the jab, 12-17 year-olds going there must bring a parent or legal guardian with them to the vaccination centre.

Berlin’s state government has also confirmed that teenagers in the capital can get the jab as early as three months after their second doses. This is the same amount of time over-18s have to wait before being given an additional dose.

Teenagers receiving a booster are still restricted to getting the Pfizer-BioNTech vaccine, with Moderna only being used in people over 30 years-old.

The move follows the delivery of a newly approved lower-dosed vaccine that’s suitable for children aged 5-11.

Paediatricians and a handful of vaccination centres around the country starting rolling out the jabs to young children after two million doses were delivered in December.

READ ALSO: State by state: Where children in Germany can get vaccinated against Covid

Both Pfizer and Moderna had submitted applications for their dual-strain vaccines to the European Medicines Agency (EMA) in mid-July, with the agency announcing on Thursday that both had been approved.

The vaccines target both the Omicron variant and the original strain of Covid, but do not specifically target the Omicron BA.4 and BA.5 sub-variants that have emerged as the global dominant strains in recent months.

The EMA approval comes after the US approved both vaccines on Wednesday, while the UK approved the Moderna dual-strain vaccine in mid-August.

Within the EU, countries have the choice of accepting the EMA recommendation straight out, or asking their own domestic health regulator to give its approval.

The dual-strain vaccines are widely expected to be used in Covid booster shot campaigns this autumn, which many countries plan to combine with the annual flu vaccination drive.