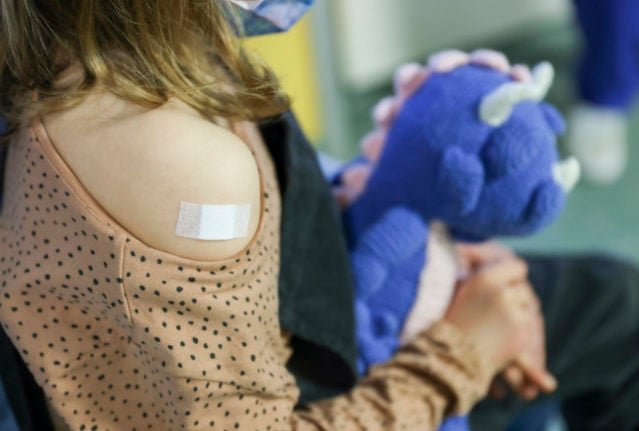 A 7-year-old girl is given a plaster after recieving her Covid jabs in Leipzig, Saxony. Photo: picture alliance/dpa/dpa-Zentralbild | Jan Woitas

In a draft resolution released on Thursday, STIKO said the Covid vaccine would be recommended both for younger children with vulnerabilities and those who have contact with at-risk individuals, such as a parent with health problems.

If five to 11-year-olds don’t fall into either of these groups, it will still be possible to get vaccinated against Covid on request and after a medical consultation with a doctor, the draft stated. The experts’ resolution is now due to be circulated among states and clinical societies before it is finalised, so changes are still possible at this stage.

“Although the 7-day incidence in age group is very high – so it can be assumed that without vaccination a large proportion of five- to 11-year-olds will be infected in the medium term – most infections are asymptomatic,” STIKO wrote.

Children without preexisting conditions in this age group are currently at low risk for severe courses of Covid-19, hospitalisation and intensive care, they added. In addition, the risk of rare adverse events from vaccination cannot currently be assessed for this age group due to limited data.

Therefore, the STIKO “is not currently making a general vaccination recommendation” for children of that age without preexisting conditions.

The vaccine panel further wrote that it “again and emphatically points out” that parents, teachers, educators, and others involved in the care of children and adolescents “should urgently take advantage of the vaccination offer including booster vaccination for themselves”.

In order to make the vaccine suitable for young children, Pfizer/BioNTech has developed a lower-dosed version of its Covid vaccine that is supplied to doctors in orange vials. After it received approval from the European Medicines Agency (EMA) at the end of November, German states will receive their first batches of the modified vaccine on December 13th.

READ ALSO: Reader question: When can children get the Covid jab in Germany?

Some states, such as Berlin and North Rhine-Westphalia, have already announced plans to start carrying out vaccinations on children from the middle of next week.

For children aged 5-11, two doses of the lower-dosed mRNA vaccine should be administered three to six weeks apart. In the past, when doctors vaccinated younger children, they usually reduced the dose of the vaccine that had been approved for over-12s themselves – this falls under so-called off-label use.

The STIKO recommendation, on the other hand, refers only to the new vaccine specially dosed for children.

Though doctors are able to carry out vaccinations without a recommendation in place, such resolutions are considered the medical standard and are an important guideline for many physicians. Since the start of the pandemic, the committee has repeatedly adjusted its vaccination recommendations to take into account the latest research and factors such as current infection rates or new variants.

Vaccination for children aged 12 years and older was initially recommended only for pre-existing conditions but was later change to encompass the entire age group. This, among other decisions, has put STIKO in the firing line as critics accused the expert panel of responding too hesitantly to the latest data.