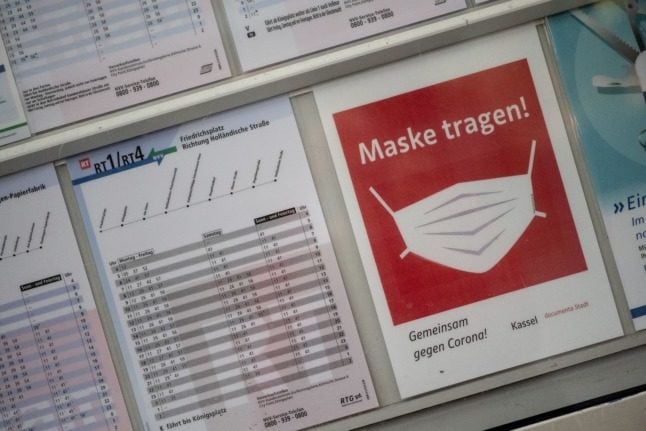 A sign telling travellers to wear a mask at a train station in Kassel, Hesse. Photo: picture alliance/dpa | Swen Pförtner

According to Drosten, the pandemic in Germany could drag on for some time – even after spring next year when experts had predicted it would turn into an endemic.

Speaking on his Coronavirus Update podcast, Drosten said the future course of the crisis depends on the spread of the Covid-19 variant Omicron.

In South Africa, the infection growth rates are high despite the start of summer there. “And that’s why I wouldn’t say at the moment that the pandemic will be over in Germany by Easter, when Omicron takes over,” said Drosten, who is based at Berlin’s Charité Hospital.

The variant B.1.1.529, first detected in southern Africa, has been classified as a strain “of concern” by the World Health Organisation (WHO). The EU health authority ECDC fears that the variant could significantly reduce the effectiveness of vaccines, and increase the risk of re-infection. However, the exact impact of the variant has not yet been determined.

“I think from January we will have a problem with Omicron in Germany,” Drosten said. The variant will probably make it necessary to “adapt existing vaccines”, he said.

Omicron is the most heavily mutated version of coronavirus found so far.

A WHO official on Wednesday said existing vaccines should still protect people who contract the Omicron variant from severe illness.

Meanwhile, a study by the Africa Health Research Institute in South Africa, which has not yet been peer reviewed, found the Omicron variant can partially evade protection from two doses of the BioNTech/Pfizer vaccine.

Scientists said vaccination, combined with previous infection, could still neutralise against the variant. That suggests boosters may bring a significant benefit. Research is still ongoing.

According to Drosten, a new generation of adapted vaccines could possibly be used from the second quarter of 2022.

How much has Omicron spread in Germany?

Drosten said he was aware of about 25 to 30 cases of Omicron in Germany after speaking to colleagues. But he said that the number is not the full picture – and that cases will increase rapidly.

The virus seems to be “extremely capable of spreading”, he said. Last Thursday, the Robert Koch Institute (RKI) told of four confirmed cases in Germany.

READ ALSO: How widespread is the Omicron variant in Germany?

As of Wednesday, 69.2 percent of the population was fully vaccinated against Covid.

The federal and state governments have set the goal of administering up to 30 million jabs by the end of the year.

According to the Robert Koch Institute, 14.6 million people in Germany have so far received a booster vaccination. Jab-uptake has seen a huge boost in recent weeks.

But doctors’ associations say they are struggling to get Covid vaccines delivered reliably.

“At this rate, the target of 30 million vaccinations by Christmas is not fully realistic,” Andreas Gassen, chairman of the board of the National Association of Statutory Health Insurance Physicians (KBV), told Redaktionsnetzwerk Deutschland.

Former Health Minister Jens Spahn (CDU) reassured ZDF on Tuesday that there were enough vaccine doses to reach the target.