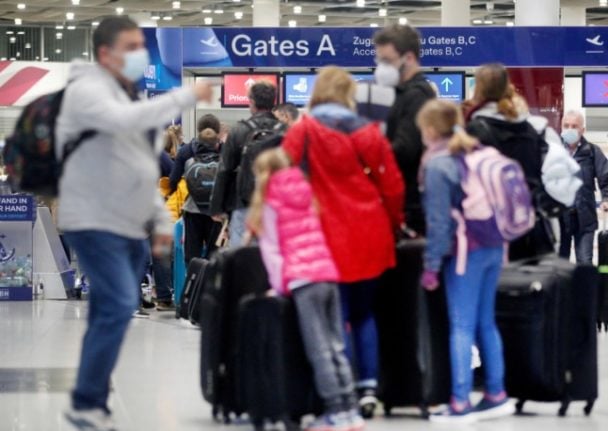 In non-Covid times, school holidays always see a spike in traffic jams and long waits at airports. But with severe pandemic restrictions in the last 18 months, travel hubs have been quieter.

Now that travel rules are significantly eased in Germany, Europe and in some other parts of the world, more holidaymakers are finally jetting off for time in the sun – and this week during the autumn holidays (Herbstferien) there’s already been huge disruption.

Passengers have been reporting chaotic conditions while trying to check-in and get through security with some even missing their flights.

On Tuesday it emerged that in Berlin’s BER airport, passengers are being advised to turn up four hours before their flight by some operators due to the long queues. The usual advice is to get to the airport two hours before take-off.

Passengers are also advised when possible to speed up the process by checking in online before going to the airport.

BER strikes again! So bad is the inefficiency of the check in systems and security scanning at the German capital's new airport, @lufthansa has already begun advising passengers to arrive there 240 minutes (4 hours) before their flight. Four bloody hours …@BERairport pic.twitter.com/Ff9J7uxtwy

READ ALSO: ‘Better than I could have imagined’: How foreigners feel about being able to travel to Germany

A spokesperson for BER airport said one reason for the long waiting times was Covid-related checks.

Airport spokesman Hannes Stefan Hönemann told regional broadcaster RBB that under Covid regulations, the passenger check-in process is longer “because you still have to show your vaccination certificates, you have to keep a greater distance and, on top of that, different Corona rules apply for different destination countries”.

BER also said that staff shortages “due to sick leave” at check-in counters were causing problems. The ground handling service providers were also short of staff due to sick leave at the weekend, which meant that there were longer waiting times when disembarking and unloading aircraft, according to BER.

However, the airport said it would provide more check-in counters at the request of the airlines.

BER said it is expecting 900,000 passengers between October 8th and October 24th.

“It is expected to be particularly busy on the holiday weekends, peaking on Fridays and Sundays. On these two days, the passenger figures will be between 60,000 and 65,000,” the airport states on its website.

Other airports are also seeing a spike in passengers.

Fraport, the operator of Frankfurt Airport, recommends careful preparation before travel and keeping all necessary documents “handy at all times”, reported Tagesschau.

Although lots more people are going on holiday now that the travel rules have been eased, passenger numbers at Germany’s airports are still far below pre-crisis levels.

READ ALSO: What you need to know about travelling between Germany and the US

German airports are currently handling about half as many passengers as they did before the Corona pandemic. About 2.7 million passengers were counted in the week ending October 3rd, according to the German Airports Association (ADV).

Both airport operators and airlines have cut thousands of jobs due to these consequences of the pandemic.

Lufthansa, for instance, is in the throes of a painful restructuring to slash costs that will include thousands of staff losing their jobs, with 30,000 jobs already axed since the start of the pandemic.

As part of the recovery plan, the airline, which was rescued by the state, will reduce its current fleet of 800 aircraft to 650 by 2023.