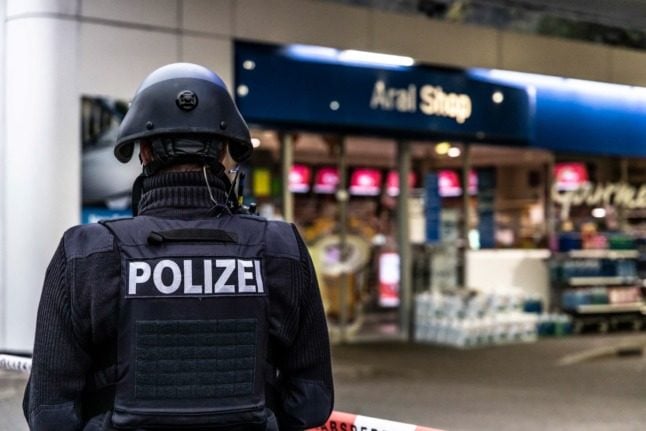 A police officer at the scene of the crime earlier this week. Photo: picture alliance/dpa/Foto Hosser | Christian Schulz

Ahead of Sunday’s general election, the killing of the 20-year-old student last weekend in the western town of Idar-Oberstein, Rhineland-Palatinate, believed to be the first in Germany linked to the government’s coronavirus rules, stunned the country.

“We mourn the death of this young man who was viciously shot dead.”

Demmer said it was now up to Germany’s independent criminal justice system to prosecute the “heinous” crime but added the government would fight forces
“trying to divide our society and stoke more hatred”, often using social media.

The row started when the cashier told the customer to put on a face mask, as required in all German shops. After a brief argument, the man left.

The suspect returned about an hour and a half later, this time wearing a mask. But as he brought his six-pack of beer to the till, he took off his mask and another argument ensued.

Prosecutors say he then pulled out a revolver and shot the cashier in the head point-blank.

The unnamed suspect, a 49-year-old German man, turned himself in to police the following day.

He was arrested and has confessed to the murder, reportedly telling police he rejected Germany’s coronavirus restrictions.

At the height of the national election campaign, the case sparked shock and outrage across the political spectrum as fears grow that the anti-mask movement is radicalising.

An interior ministry spokesman told reporters Wednesday that the killing seemed to be an “isolated case” and that the movement of opponents to measures
to contain the coronavirus outbreak had grown smaller as restrictions ease.

However, he acknowledged that “some actors” in the movement appeared to have grown more extremist and potentially violent, with far-right chat rooms playing a growing role in stoking hate.

Media reports found the killer had also been active in such chat rooms.

Its protests have at times drawn tens of thousands of demonstrators, attracting a wide mix of people including vaccine sceptics, neo-Nazis and members of the far-right AfD party.

Health Minister Jens Spahn told reporters as he announced a tightening of rules for people who have opted not to be vaccinated against Covid-19 that the country “must clearly and decisively say no to any kind of pandemic extremism”.

Germany is in the throes of a fourth wave of the outbreak, although the daily death toll has remained in the double digits as the percentage of vaccinated people has climbed.

The issue has crept into the election campaign, which has turned into a tight race between the Social Democrats, three points up in the polls, and Merkel’s Christian Democrats (CDU).

CDU candidate Armin Laschet came in for criticism on Wednesday for a new campaign advert in which he argued that his party should keep the lines of communication open with all segments of society “even those who take a critical stance”.

The campaign video shows a recent scene in which a member of the “Querdenker” mounted the stage with Laschet uninvited and asked a series of pointed questions about Germany’s coronavirus rules, which the candidate calmly tackled.

Der Spiegel news weekly said the Querdenker member was known to belong “to the radical right-wing corona denier scene” and called the advert “unfortunate” and “strange” against the backdrop of the killing in Idar-Oberstein.