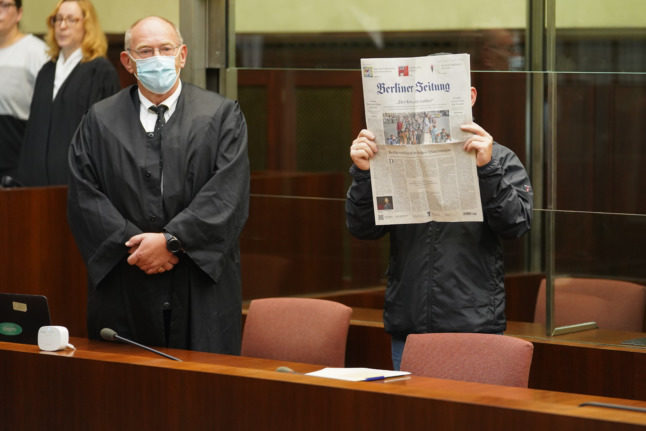 The defendant, Jens F., hold a newspaper over his face as he stands next to his attorney, Friedrich Humke, in the Berlin Chamber of Justice on September 1st, 2021. Photo: picture alliance/dpa | Jörg Carstensen

The suspect named only as Jens F., 56, is accused of handing over a CD-Rom with more than 300 files of floor plans of buildings used by the German Bundestag to the military attache of the Russian embassy in 2017.

The military attache in post at that time is believed to be an employee of Russia’s GRU military intelligence service. The suspect meanwhile worked for a security company contracted by the Bundestag.

Reading out the charge sheet before a court in Berlin, prosecutor Frank Stuppi accused the man of espionage.

The suspect did not make any statements at the opening of the trial.

The court revealed that a plea bargain had been offered with a jail term of between 20 months to two years, but that was not taken up by the suspect.

The defence had advised Jens F. not to plead guilty, arguing there was no proof that he had transmitted the information to the Russians.

READ ALSO: Briton accused of spying on Germany for Russia remanded in custody

According to defence lawyer Friedrich Humke, the prosecution’s case is based on the life of his client — who was once an army officer in former communist East Germany.

Prosecutor Stuppi acknowledged that other people could have had access to the floor plans, but argued that the indictment was based on the route that the files had taken.

Key indicators were when the files were saved and how they were stored, he said.

The court is expected to hear the case until the end of September.

Without citing its sources, Spiegel magazine reported that the suspect was a former officer of the 9th tank division of the East German army.

Between 1984 and 1990, he also worked for the feared Stasi secret police informally, said Spiegel.

The case comes at a time of particularly rocky ties between Berlin and Moscow over a series of espionage cases, the poisoning and jailing of Kremlin critic Alexei Navalny as well as repeated cyberattacks against the West.

The West has accused the Russian government of poisoning Navalny with the Soviet-era nerve agent Novichok in August 2020, which the Kremlin denies. Navalny was treated in Berlin before he returned to Moscow several months later. Upon landing at the airport, Navalny was imprisoned, sparking demands from the West for his release.

In June, German police arrested a Russian scientist working at an unidentified university, accusing him of spying for Moscow.

Germany has also repeatedly accused Russia of cyberattacks on its soil.

Bundestag lower house of parliament, forcing the entire institution offline for days while it was fixed.

In another high profile case before a German court, a Russian man is on trial over the assassination of a former Chechen commander in a Berlin park, allegedly on Russia’s orders.

Moscow has denied being behind such actions.