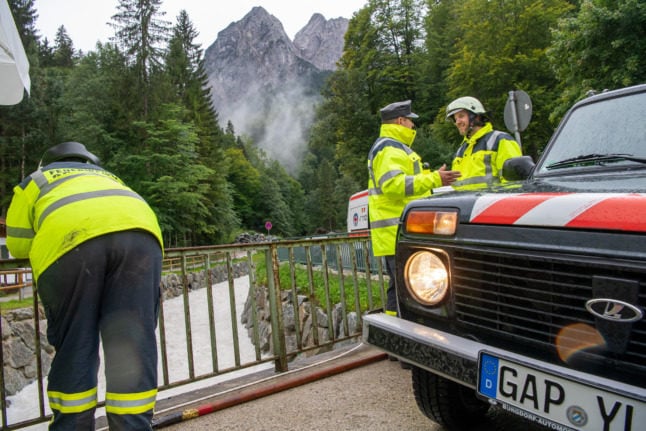 Employees of the emergency services search for the missing in the alpine southern regions on Bavaria, near the Austrian border, on Monday, August 16th. Photo: picture alliance/dpa | Peter Kneffel

According to media reports, a tidal wave rushed through the Höllentalklamm gorge in the district of Garmisch-Partenkirchen during the torrential downpour, sweeping away several people. Eight were brought to safety by rescue workers.

Six of them were rescued from the ravine where they had been trapped by the floods, while two others were brought to safety from further up the gorge. They were soaked through and suffering from hypothermia, but otherwise well, a police spokesman told DPA on Monday evening.

However, eyewitnesses reported that two people were unable to be rescued after the wooden bridge they were standing on collapsed due to the force of the tide.

More than 160 rescuers were deployed to search for the missing people, including specially trained canyon rescuers from the mountain rescue service and four helicopters. On Monday evening, the search had to be broken off after nightfall.

Body of a woman recovered

The search continued again on Tuesday morning from 7:30am. At 8:30am, according to police, the body of a woman was spotted lifeless in the water and subsequently recovered by the mountain rescue services.

Though the woman is presumed to be one of the two missing people who were spotted on the collapsed bridge, further investigations into the identity and circumstances of the death are being carried out by officers of the criminal investigation department.

Now, the search continues for the other missing person. Rescuers are said to be looking for pieces of evidence, such as scraps of clothing, under the collapsed bridge.

According to head of rescue operations Hans Steinbrecher, the hunt for the missing has been made more difficult due to the hazardous and wet conditions in the flooded gorge.

“In the gorge itself, nobody can enter the water – not even the rescuers,” he told told rosenheim24.de. “That would also be fatal for them.”

The incident took place high in the alps near the Austrian border, where several famous hiking routes weave through the mountains.

Tens of thousands of people hike through the Höllentalklamm gorge every year, with most visitors flocking to the hiking hotspot in summer.

With its waterfalls and steep rock faces, the gorge is not only a popular spot for photographs, but also a well-trodden route up to Germany’s highest mountain, the 2962-metre-high Zugspitze.

After Monday’s floods, the route up to the Höllentalklamm has been blocked off until further notice.