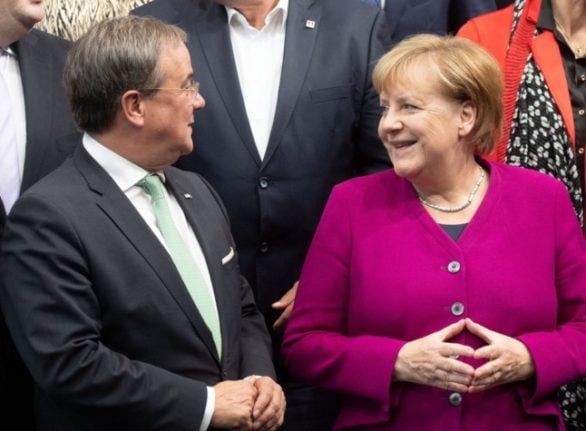 Die Merkel-Raute is an amalgamation of ‘Merkel’ (as in Angela Merkel, who has served as Chancellor of Germany since 2005) and the German word for ‘rhombus’ or ‘diamond’.

It refers to the hand gesture that has become a signature move for Merkel. This gesture is characterised by resting the hands in front of the stomach so that the thumbs and index fingers of each hand meet each other to form a quadrangular shape. The English-speaking media often refer to it as the ‘Triangle of Power.’

During the 2013 federal election, the CDU created a huge banner at the Berlin Hauptbahnhof displaying nothing but Merkel’s hands forming the Merkel-Raute next to the slogan ‘put German’s future in good hands.’ The image was also used liberally during the 2017 election campaign.

Political scientists see the Merkel-Raute as an effective visual signal of Merkel’s reputation as a reliable, calm and solid leader. It prevents fidgeting or nervous movement during public speaking and encapsulates her steadiness, whilst displaying a kind of openness.

When asked about the hand gesture, Merkel said her affinity with it comes from the fact that it ‘shows a certain love of symmetry’ (‘es zeigt auch eine gewisse Liebe zur Symmetrie’).

However, critics have accused her of using the gesture to further a ‘cult of personality’, accusing her of prioritising embodying an image of stability and sobriety above a specific set of policies.

It is also reminiscent of Merkel’s famous nickname of ‘Mutti’, a moniker which initially had positive connotations but which soon evolved into a satire of Merkel’s perceived cult of personality, used disparagingly by her critics.

The gesture has become so well-known and symbolic that it even has its own Wikipedia entry.

Merkel’s self-presentation as the solid and enduring Chancellor of so many years has often been lauded as contributing to her ‘universal appeal’, but some have raised concerns about the individualisation (Individualisierung) of politics in Germany, saying it should be based around parties and policies rather than specific politicians.

Politico wrote in 2019 that “Merkel’s universal appeal, which she has achieved by blurring the traditional political boundaries in German politics, has contributed to the decline of the country’s traditional parties […] the parties of Merkel’s “grand coalition” – her Christian Democrats and the (centre-left) Social Democrats – are interchangeable in many voters’ eyes.”

Body language is very important in politics – Merkel’s ‘triangle of power’ even has its own Wikipedia page.

Merkel’s ‘triangle of power’ is one of the most well-known and effective hand gestures in the world.

Merkel’s ‘triangle of power’ functions as a symbol of stability and openness.

GERMAN LANGUAGE
EXPLAINED: What to know about languages and dialects in Germany