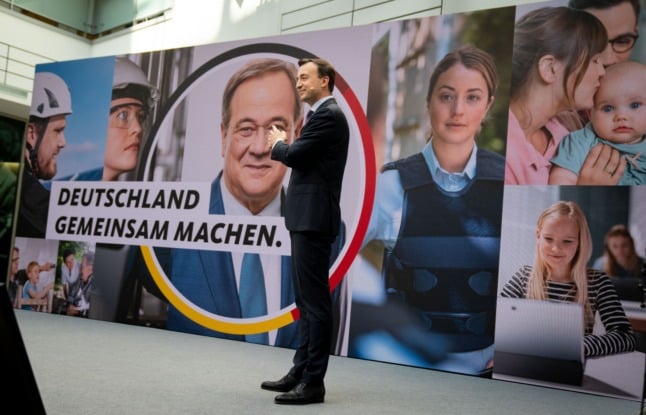 We looked at how the party, whose candidate Armin Laschet is bidding to be the next chancellor when Merkel steps down, was crucified online – and what they were, perhaps, trying to achieve.

The joint campaign, by the Christian Democratic Union (CDU) and Christian Social Union (CSU) parties, was meant to be a celebration of the start of a new era and pave the way for the Union’s re-election under new leadership.

But it didn’t get quite the reception politicians were hoping for.

“Satire is dead,” was the verdict of one Twitter user just a few hours after the fan-fare of the Union’s (CDU/CSU’s) re-election campaign launch on Tuesday.

He was referring to one of the party’s new campaign posters, which depicted 60-year old CDU leader Laschet, clad in a very traditional suit and tie, staring into middle distance.

The poster’s catchline read: “Together for a modern Germany.”

“Why do conservatives always act as if they want change and modernisation?”, another Twitter user asked. “They don’t want that, and that’s exactly why they get elected.”

On Tuesday afternoon, the Union unveiled their campaign slogan for the upcoming German elections in September: “Deutschland Gemeinsam machen”, which translates, somewhat awkwardly, as either “Do Germany together” or “Make Germany together”.

It didn’t take long for the responses to come flooding in on Twitter as users mocked the slogan and pointed out the discrepancies between the CDU’s claims and what they had done in their 16 years in power.

Simon Lavo-Braumann, who often satirises German politics on Twitter, created a lengthy thread in which he juxtaposed the Union’s flyers with news stories about policies they’d implemented in recent years.

In one example, he placed a flyer with the slogan “Learn today what counts tomorrow” next to a story about the Ministry for Education refusing to offer financial assistance to unemployed students during the pandemic.

Another Twitter user pointed out that the “together” slogan didn’t quite match the photographs on the campaign posters, which exclusively featured white people and straight couples.

CDU be like: yes to heteronormativity, no to any color that isn't white.#DeutschlandGemeinsamMachen ahaha. https://t.co/G7HQFp6yJd

Several people also pointed out that the phrase “Deutschland gemeinsam machen” not only sounded a bit iffy in English – but also comes across strangely in German as well.

Tweeting on the afternoon of the campaign launch, German news site Deutsche Welle struggled to work out what the slogan actually meant.

“What do you think it means?”, they asked the Twittersphere. “Wrong answers only.”

Angela Merkel's @CDU has just unveiled its election slogan…and many think it sounds slightly odd, both in German and English.
#Deutschlandgemeinsammachen – Make Germany together (?)🤔

What do you think it means? (wrong answers only 😉) pic.twitter.com/pFIXDh22BI

Some people were reminded of Donald Trump’s famous “Make America Great Again” by the “Make Germany together” slogan, but a few questioned what exactly Germany was going to be made into.

So, what are the Union trying to do?

With the overwhelmingly popular Merkel set to make way for the new leader in September, the CDU and CSU’s election campaign will be all about presenting Laschet as a similarly capable – and likeable – pair of hands.

At the top of their campaign website – ein-guter-plan-fuer-deutschland.de (“a good plan for Germany”) – Laschet takes centre-stage in a video that sets out his party’s vision for the future, emphasising modernisation, a strong economy and robust environmental protections.

In their pro-business and pro-environmental message, it appears that the CDU and CSU are trying to see off two of their biggest electoral competitors: the pro-business Free Democratic Party (FDP) on the right, and the eco-friendly Green Party on the left.

The FDP, in particular, have been banging the drum for modernisation and digitalisation in recent years, suggesting that this might be the right chord to strike with Germany’s entrepreneurial community. With their ‘gemeinsam’ (together) slogan, the Union also seems to be appealing to an ongoing feeling of solidarity and mutual sacrifice that has been awakened in the ongoing pandemic.

In short, they’re trying to send a message to voters that they are the right party to bring the country together and rebuild after Covid.

Following the launch of its manifesto website, the Union suffered a further setback after the domain name was hijacked by Sea Eye, an organisation dedicated to rescuing refugees who attempt to make the crossing over to Europe over the Mediterranean.

The name of the manifesto site was recreated without hyphens under the website addresses einguterplanfuerdeutschland.de and egpfd.de by the activists, who are demanding, among other things, a “decriminalization of sea rescue”.

“In their manifestos, other parties support the state’s duty to rescue [refugees] at sea, but the CDU and CSU do not,” the organisation wrote on the new website. “At the same time, their current policy undermines the values of our Constitution by standing idly by as people die in the Mediterranean.”

Some Twitter commentators suggested that the sea rescue group could sell the domains back to the Union for an “absurd price” and donate the money to projects that fight against the populist Right.

With less than three months to go until the General Election on September 26, pundits are keeping a close eye on any movements in the polls.  And it does look like the CDU/CSU is still Germany’s favourite pick for the top party.

Back in late April, it briefly looked like the Green Party was emerging as a major challenger after the eco-party took the lead in the polls with 28 points.

Meanwhile the Union, which has governed Germany as a senior coalition partner for almost two decades, slumped into second place, suggesting a potential reversal of fortunes.

But the honeymoon period didn’t last long, as Green Party co-leader Annalena Baerbock has been continually plagued by personal attacks and “fake news” and is currently facing a scandal over whether she plagiarised sections from her recently released book.

As of Wednesday, the CDU/CSU were once again ahead in the polls with 29 points, while the Greens trailed in second place with 19 points.

In last place were The Left party, with just seven points.