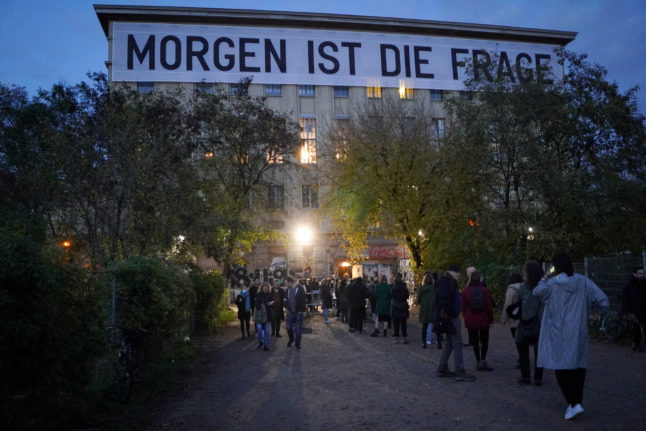 Berghain club in the east of Berlin. Photo: DPA

On March 13th, 2020, Berlin’s clubs were ordered to close in order to stem the spread of Covid-19. Since then, they haven’t been permitted to fully reopen – even last summer, when infection rates were in the single digits.

Now, on Friday, a number of Berlin’s most beloved clubs will be reopening for revellers, including Berghain, Golden Gate, Club der Visionäre, Birgit & Bier, and ://about blank – albeit with a number of strict hygiene rules in place.

Though you might imagine that Germany’s capital would be the first place where the club scene started up again, the big-name clubs in Berlin were actually beaten to it by Leipzig’s Distillery club, which took part in a pilot scheme to test a concept for the reopening of nightlife on June 12th.

But I thought clubs were already open?

Since bars reopened for outdoor service on May 21st, some clubs were also allowed to reopen their doors, but more as beer-garden style establishments than clubs.

Until Friday, the so-called Tanzverbot (ban on dancing) was kept in place, meaning proper club nights with DJs and dancing weren’t allowed to take place.

All of that changes this weekend, when a number of parties will take place in clubs around the city, with up to 250 party-goers permitted to dance in the open air.

Do I need to show a negative test?

Yes, anyone who wants to be part of the action will need to show a negative test, no more than 24 hours old, in order to get into the club.

Party-goers have to wear an FFP2 mask on the dancefloor at all times, and anytime you’re not in your seat, for example when going to the bathroom, entering or exiting the club, or visiting the bar.

What other rules do I need to know about?

There are also restrictions on how many people you can go with, with single groups limited to ten people from up to five different households. Crucially, the ban on serving alcohol between midnight and 5am has been lifted.

While the move will no doubt be welcomed by club-goers around the city, there remains a strong sense among those in the club scene that normality is a long way off.

Speaking to the German Press Agency, Pamela Schobeß, the CEO of club Gretchen, revealed back in January that she didn’t expect the pre-pandemic party scene to return to the city until at least 2022.

A spokesperson from Friedrichshain club ://about blank agreed with this assessment.

“What we know and appreciate as a club culture depends on intensity, closeness, contact, intoxicating nights, sharing and exchange,” they told Resident Advisor. “To what extent the Berlin party situation we enjoyed before corona can be restored is not foreseeable.”

Some commentators have also felt that the plight of clubs has been continuously ignored by politicians during the pandemic, with dancing venues being both the first to close, and the last to be allowed to reopen.