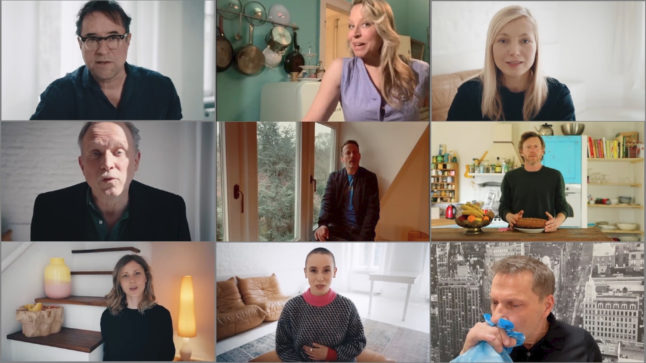 A selection of video stills from the #allesdichtmachen campaign. Photo: DPA

Under the hashtag #allesdichtmachen (close everything), the artists, some of whom have appeared in hit shows like Tatort and Babylon Berlin, simultaneously distributed ironic satirical clips with personal statements on Instagram and YouTube on Thursday.

In the videos, the actors addressed various aspects of the fight against the pandemic: Tatort star Jan Josef Liefers thanked, with an ironic undertone, “all the media in our country, who for over a year have been tirelessly responsible and with a clear stance to ensure that the alarm stays exactly where it belongs, namely at the very, very top”.

In his clip, Richy Müller took turns breathing in two bags and commented ironically, “If everyone used two-bag breathing, the lockdown would have ended a long time ago. So stay healthy and support the Corona measures. I’m going to go take a breath.”

Babylon Berlin star Volker Bruch sarcastically appealed to the German government: “Dear Bundesregierung, don’t leave us alone in this situation. It’s important that we all have enough fear.”

TV film actress Nina Gummich ironically proclaimed in her video: “I strongly support freedom of expression. Especially during such turbulent times as the coronavirus crisis. That’s why I’ve been ridding myself of my own opinion piece by piece over the last few months.”

In addition to some praise for the campaign, there was also immediate criticism from fellow actors.

Elyas M’Barek, well known for his role in the TV series Türkisch für Anfänger (Turkish for beginners) wrote: “No one is helped by cynicism.”

He added that everyone wants to return to normality, and that will happen soon enough.

Satirist Jan Böhmermann countered the action on Twitter, saying that the only video to watch “if you have problems with Covid containment measures” is the ARD documentary from Berlin’s Charité hospital entitled “Station 43 – Dying”, adding hashtag #allenichtganzdicht (don’t shut everything) with a crying smiley.

“The actors of #allesdichtmachen can to shove their irony deep into the ventilator,” tweeted moderator Tobias Schlegl, who is also an emergency paramedic.

Yet some positive feedback came from politicians and virologists. Former president of the Federal Office for the Protection of the Constitution, Hans-Georg Maaßen called the action “great” on Twitter.

Hamburg virologist Jonas Schmidt-Chanasit spoke of a “masterpiece” that should “make us think a lot”.

The arts and culture scene has been suffering badly from the government’s tough coronavirus measures for more than a year.

According to the Bundesverband Schauspiel (BFFS), many of the approximately 15,000 to 20,000 actors and actresses in Germany have had hardly any income since March 2020.

According to the association, two-thirds to three-quarters of all actors and actresses live from guest engagements at theatres that are currently unable or barely able to work.