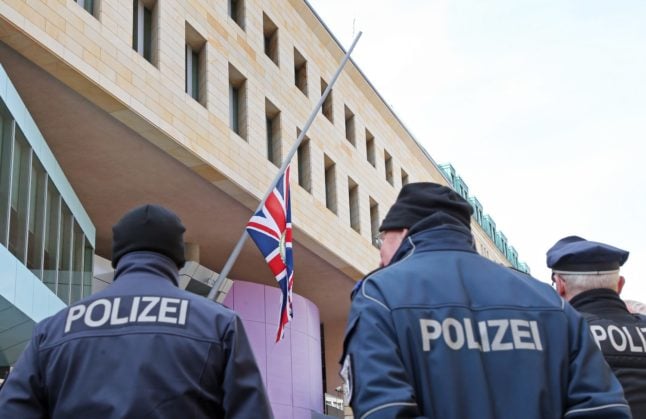 A British flag was lowered to half mass in Berlin on Friday afternoon. Photo: DPA

“We are deeply saddened by the loss of His Royal Highness Prince Philip. Our thoughts and prayers go out to the Royal family, the people of the Commonwealth, and all who loved him dearly,” Maas tweeted.

“He lived a long life of service to his country.”

German Chancellor Angela Merkel said on Friday the death of Prince Philip filled her with “great sadness” and that her “thoughts are with Her Majesty Queen Elizabeth and the royal family”.

“His friendship with Germany, his straightforward nature and his sense of duty will remain unforgotten,” Merkel said in a statement released by her spokeswoman.

Germany’s president Frank-Walter Steinmeier also paid his respects to Prince Philip in a speech on Friday.

“We Germans mourn the loss of a winning personality who made an important contribution to the reconciliation of our nations after the horrors of the Second World War,” said Steinmeier.

“As a member of the Royal Navy, Prince Philip fought for the liberation of Europe from Nazi terror. His commitment to democracy and freedom will remain in our memory.”

Steinmeier said he himself had been able to experience Philip’s “perceptive humour” at meetings in London and Berlin “personally with great pleasure.”

Steinmeier also paid his condolences through words he issued to Queen Elizabeth II, 94, on the death of her husband.

“It is with deep sadness that I have heard the news. I would like to express my heartfelt sympathy to you, the Royal Family and your people, also on behalf of my compatriots.”

“Prince Philip was popular and highly esteemed in Germany. Prince Philip was a support to you, your family and the British people in difficult times and in good times. With poise, charm and wit, he won the respect and love of the people of your kingdom.”

The flag in front of Berlin’s British Embassy was also lowered to half mass in order to pay tribute to Prince Philip. The Duke of Edinburgh spent 65 years by the Queen’s side, campaigning various causes including Britain itself, and retiring from public service in 2017.