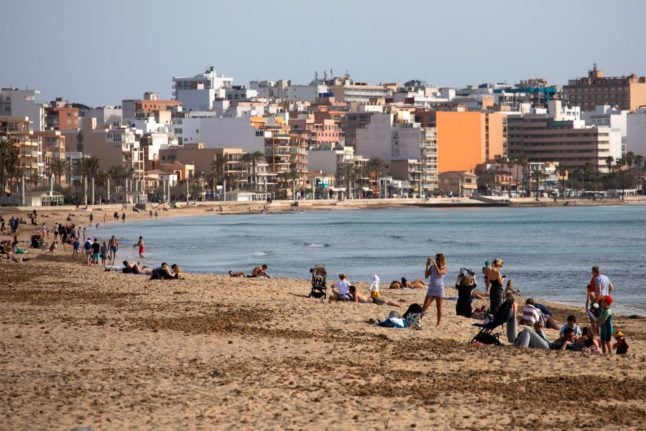 People on a beach in Mallorca on March 29th. Photo: DPA

Tanya Buscher said she felt “a little bit” guilty when she booked a plane ticket to Mallorca – her first holiday since the pandemic struck – but her remorse did not last long once faced with the Spanish island’s turquoise waters.

“We don’t know what the future will hold, they could close the borders,” the 32-year-old, her shoulders already reddened by the sun, told AFP.

She fled Dortmund for the largest of Spain’s Balearic Islands in the face of warnings from German Chancellor Angela Merkel against Easter trips abroad, aimed at preventing the spread of the coronavirus.

Bookings for the Balearics surged from mid-March, after the low infection rate in the archipelago prompted Berlin to drop a quarantine requirement for people returning from the region — long a favourite of German holidaymakers.

Holiday group TUI immediately doubled its flights from Germany to Mallorca, while German flag carrier Lufthansa tripled its weekly connections from Frankfurt to the islands.

The news annoyed some Spaniards, themselves unable to enjoy the Balearics during Easter due to a nationwide ban on inter regional travel to try to curb a rise in infections.

Foreigners like Buscher can fly in as long as they present a negative PCR test.

Germans also must present a negative test on their return home.

“I really needed a break, it’s hard to work at home without seeing anyone,” said 53-year-old divorcée Birgit Leeck after taking a PCR test so she can fly home to Hamburg after a week in Mallorca.

It was great!” she added, shrugging her shoulders when asked about criticism that the island was being flooded with tourists in the middle of a pandemic.

“Where are they? Do you see them?,” she asked, pointing to a huge nearby beach dotted with holidaymakers, rather than the usual Easter crowds.

Increased reservations from Germany are far from saturating Mallorca’s enormous hotel room capacity — only 13 percent of its hotels are currently even open, according to local hotel association FEHM.

And traffic at Palma’s airport is down by 60-80 percent from what it was at this time last year, according to Spanish airport operator Aena.

At the beachfront Acapulco Playa hotel only 10 percent of rooms are occupied, compared to 90 percent during a normal Easter break, said Fernando Gonzalez of hotel chain Gruphotel.

The company has only opened five of its 36 establishments this year in the archipelago, which also includes Menorca and Ibiza.

Squeezed as the tourism-dependent island economy shrank 24 percent last year, hotels have taken steps to reassure guests that they are safe, with temperature controls at entrances to buffets and hand gel dispensers everwhere.

“There is no other solution than to try to open up, in a safe and controlled manner obviously,” said Gonzalez.

The island is quieter than usual as bars and restaurants must close at 5pm under virus restrictions.

For Cristian Lafourcade, a 49-year-old waiter at the Zur Krone bar, the arrival of German tourists – who make up 95 percent of his customers – is a “total relief”. The restaurant’s terrace was one of the few open along a strip of beach full of closed shops.

Many German holidaymakers said they felt safer in the Balearics than they did in Germany, with its crowded streets and supermarkets.

“If we follow the rules, everything is fine,” said Charline Osmi, 27, who came from Hanover with her boyfriend who was “depressed” by Germany’s lockdown measures.

“We have done the test so as to not bring the virus, and here we are careful to keep our distance,” he added.

The couple did not tell their colleagues that they were going to Mallorca for fear of being criticised but were enjoying the sun.

“You have to learn to live with the virus,” said Osmi.