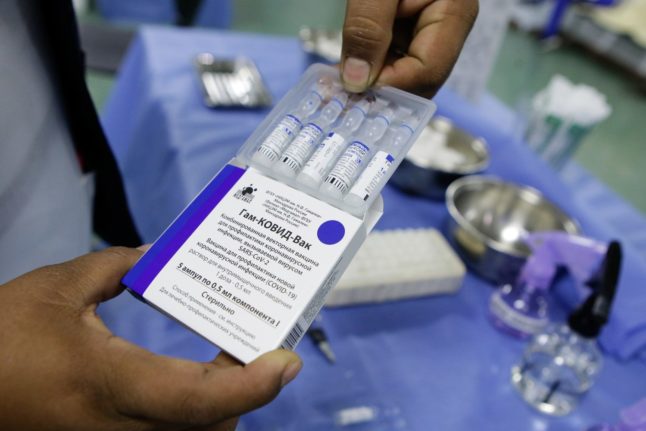 A nurse in Venezuela uses the Sputnik V vaccine in February. Photo: DPA

He added that European studies of the Russian vaccine had so far shown that it was “highly safe” and “in some cases better than vaccines which have already been approved”.

“We need to approve it quickly and efficiently, not get bogged down in the classic, bureaucratic details,” he said.

Berlin mayor Michael Müller also noted that “we need every vaccine we can get”. The European Medicines Agency (EMA) launched a rolling review of Sputnik V earlier this month, though several EU countries have already begun distributing it.

If approved Sputnik would become the first non-Western coronavirus jab to be certified for use across the 27-nation bloc.

On Thursday, Bavarian premier Söder claimed that approval was now “only a matter of time”, and that it was more important that the EU struck deals to secure production and supply.

“Europe needs to negotiate quickly and not wait until the approval is there. This is an urgent appeal not to miss another chance,” he said.

“If it’s the case that production is difficult with Sputnik, then there could be an offer to produce it here in Germany,” he added.

Sputnik V’s developers claimed Monday that they had production deals with companies in Italy, France, Spain and Germany, yet it remains unclear how concrete these agreements are.

The French and Spanish governments both told AFP they were not aware of any formal contracts, while German pharmaceutical company IDT Biologika said it was “still in talks” with Russia over vaccine production.

Both Söder and Müller called for an expansion of European production capacities and ensure that EU-produced doses remained in the EU to invigorate the bloc’s sluggish inoculation campaign.

“We need more European sovereignty. Europe’s reliance on other producers is one of the weaknesses of our entire vaccine architecture,” said Söder.

After the temporary halt of AstraZeneca jabs on Monday, more German state leaders are promoting the Russian vaccine Sputnik V in order to more quickly vaccinate the population.

“The (Sputnik V) vaccine should be approved. Russia is a great country of science, and I have not the slightest doubt that the science there is capable of producing a powerful vaccine,” Saxony’s state premier Michael Kretschmer (CDU) told the newspapers of the Funke-Mediengruppe on Thursday.

Like Kretschmer, Saxony-Anhalt’s state premier Reiner Haseloff (CDU) pointed out that the European Medicines Agency (EMA) would first have to decide on the approval.

“Basically, however, the following applies: in the fight against coronavirus, we welcome any vaccine that is safe and effective and thus helps us to overcome the pandemic,” he told the Funke-Zeitung.

“When it comes to people’s health, origin should not play a role.”

Thuringia’s state premier Bodo Ramelow (Left Party) told the Funke-Blättern: “For a long time, I’ve been wishing for much more pressure from the federal government to get more alternative vaccines approved.”