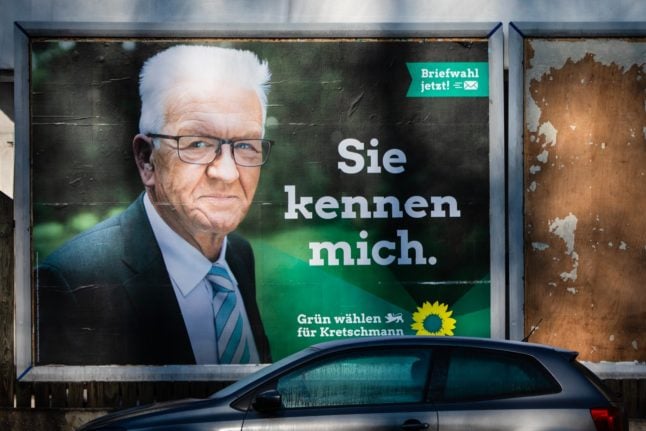 The Green's Winfried Kretschmann's election poster has the message: "You know me". Photo: DPA

At first glance, the affluent southwestern German state of Baden-Württemberg with its booming automobile industry might look like an unlikely stronghold for the Green party.

But the Greens, who have headed the government in the conservative industrial region for 10 years, are set to consolidate their grip in the state, opinion polls in the run-up to the next state election on Sunday show.

“We have proven that it can work, even if it is complicated at times,” said Winfried Hermann, Baden-Württemberg’s transport minister – a key post in a region that Mercedes, Daimler and Porsche call home.

The regional poll, which comes just six months before a general election on September 26th, is seen as a bellwether of what might lie ahead as Chancellor Angela Merkel prepares to bow out of politics.

The state’s Green-led coalition government with Merkel’s CDU could in fact be replicated on the federal level, albeit with the conservatives as the senior partner.

In Baden-Württemberg, the Greens are now up to 10 points ahead of the conservatives, who are under pressure because of frustration with the government’s pandemic management and a corruption scandal.

As a result, the ecologists could score their best result since they first came to power in the state in 2011, propelled by fear and anger over the Fukushima disaster.

After five years in coalition with the Social Democrats (SPD), the Greens formed an unlikely partnership with the CDU in 2016, the only coalition partner available to them as the left imploded and the far-right AfD sucked votes away from the centre.

“Who could have imagined this years ago, when the differences between black and green were so great and personal animosity so strong,” 60-something transport minister Hermann said, referring to the parties’ traditional colours.

“We can see that the CDU has moved on climate issues, while the Greens are not as radical as they were 10 or 15 years ago,” he said.

Arthur Roussia, 28, a deputy for a CDU candidate in industrial state capital Stuttgart, agrees that “on the whole, the collaboration has worked well”.

Roussia puts this down to the “pragmatism” of Baden-Württemberg state premier Winfried Kretschmann, who he credits with being “more reasonable” than many Green colleagues.

The 72-year-old, with his crop of white hair and rectangular glasses, features prominently on the party’s main campaign poster for the election, accompanied by the slogan: “He knows what we can do.”

“I appreciate that he is always looking for dialogue and consensus, whether with the business world or farmers,” said one Stuttgart resident, Julia, as she passed a campaign stand.

For political scientist Ursula Münch, director of the Academy for Political Education in Tutzing, Bavaria, Kretschmann’s political style has been a decisive factor in the success of the Greens in this prosperous region.

“As a Catholic who is attached to his roots, someone who represents a certain common sense, he speaks to traditional CDU voters,” Münch said.

The former biology and chemistry professor is a founding member of the Greens, though his politics sometimes appear out of step with the party’s general ethos.

Last year, for example, Kretschmann supported a scrappage scheme to incentivise the purchase of new cars to help automobile companies struggling in the coronavirus pandemic.

Such stances have angered the region’s more hardcore environmentalists, who have proposed their own “climate list” of candidates for the election.

Peculiarities like these mean it would be “hasty” to predict how a coalition between the Greens and the conservatives might work at the national level based on the regional picture, Münch said.

The Greens at the federal level are also significantly to the left of those in Baden-Württemberg and must appeal to a much more diverse electorate.

READ ALSO: ‘Surfing the Zeitgeist’: How the Greens won over Germany

Johanna Molitor, a candidate for the liberal FDP party in Stuttgart, warned that “such a coalition at the national level would be too unstable”.

Even Hermann admits that “there have been conflicts”.

But he noted that in the end, “everyone knew that there was no alternative but to carry on” and find a compromise.