There is a famous saying that what separates Austrians and Germans is their common tongue. Or in German: “Was Deutschland und Österreich trennt, ist die gemeinsame Sprache.”

We’ve summarised the key differences for any German speakers who plan to visit Austria.

Austrian German is often more polite and indirect than German spoken in Germany.

For example while in Germany, people say Guten Tag (good day) or simply Hallo, in Austria Grüß Gott (God bless you) is a more standard way to greet someone.

Younger people in Austria and Bavaria may use the greeting Servus, which is common throughout central Europe. It comes from the Latin servus, and means “I am your servant” or “at your service”.

In Austria it is not considered polite to say succinctly to your waiter in a cafe: “Noch einen Kaffee, bitte!“ (Another coffee please!).

One should use  subjunctive forms, modal verbs and questions, asking instead “Entschuldigen Sie, könnte ich bitte noch einen Kaffee haben?“  (Excuse me, could I have another coffee, please?)

Some see this formality as charming, others find it a bit of a waste of time.

The best known differences in vocabulary between Austrian German and German German are the following.

If you ask for a Tüte (shopping bag)  to take your goods home from the supermarket in Austria, you will be met with a blank stare. In Austria a Tüte is an ice cream cone. What you want is a Sackerl.

When taking the stairs, Germans use the word Treppe, while Austrians say Stiege.

Germans call a cushion a Kissen, Austrians go for a Polster.

In addition, there are lots of different words for food in Austria compared to Germany. When Austria joined the EU in 1995, a list of 23 typical Austrian expressions for food were registered.

Poetically, rather than the humble Kartoffel (potato), Austria has the Erdapfel (earth apple). And the prosaic Tomaten (tomatoes) become romantic Paradeiser in Austria.

There are so many words for bread in Austria, that would require another article.

In Austria, you are more likely to be drinking a beer down your local Beisl (a Yiddish word for pub) than in the German Kneipe. If someone offers you a Jause in Austria, they are offering you a mid-morning or mid-afternoon snack.

When you stagger home on the Straßenbahn (tram) in Vienna, remember to call it a Bim (a word which recalls the sound the tram makes as it winds its way through the city).

What to avoid saying in Austria

You will not be popular if you ask for Sahne (cream) in your coffee in an Austrian cafe, the correct term is Obers or Schlagobers (whipped cream).

Likewise, when you finish eating in Austria, please do not describe the food as lecker (tasty). Many Austrians do not like this word. The Austrian way is to say Es hat mir gut geschmeckt (it tasted good to me)

If you feel like a change from the German Auf Wiedersehen or Tschüss (goodbye), try the Austrian Bussi Baba, which translates to “kisses, bye”. Maybe not one to try out on your boss. 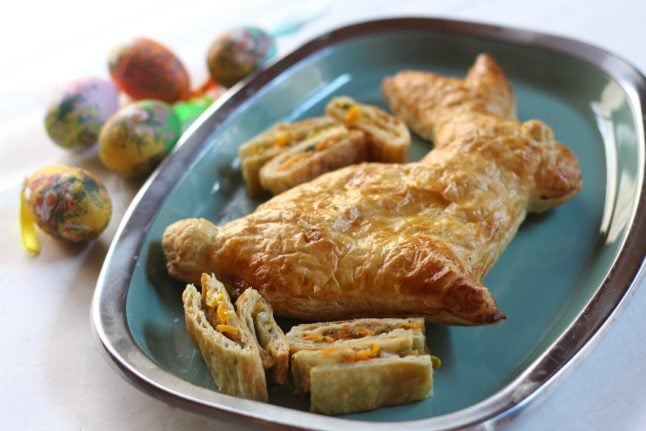 The recipe below is for an all vegetable version. It has a mix of asparagus, carrots, onions and yellow pepper. However, you can easily substitute for your favorite vegetable combination or a lovely mix of seasonal spring vegetables. Additionally, you could add potatoes, cheese – and even ground meat for a non-vegetarian version.

To create the shapes, you will need a 20cm rabbit shaped cake pan, cardboard cutout or chocolate mold. Use any of these to trace rabbit shapes onto the rolled out puff pastry. Creating these strudels is a fun Easter holiday kitchen project to do with children.

•    Chop the asparagus spears into pieces.

•    Peel the onion and chop into small pieces.

•    Place the  butter in a medium sized skillet over medium heat.

•    Add the onions and cook until almost transparent. Add the asparagus, shredded carrots, and yellow pepper. Cook, stirring frequently until the vegetables start to soften but are still crisp. Do this for about 10 minutes. •    Mix in the chopped fresh chives and fresh thyme.

•    In a small separate bowl beat the egg with a fork. Use a pastry brush to coat the edges of four of the puff pastry rabbits with the egg. About 1.5 cm all around.

•    Working with one piece at a time, place the top pieces of puff pastry over the vegetables and use your fingers to carefully but firmly seal the edges together.

•    Use the scraps of the puff pastry to roll small balls and larger balls, one each for each puff pastry rabbit. Place the smaller balls on each rabbit for eyes. Place the larger ones where the tail should be.

•    Transfer the puff pastry rabbits to the parchment paper lined baking sheet. Brush the outside of the rabbits with the leftover egg.

•    Place in the oven and bake for 20 minutes or until golden brown.

•    Remove from the oven. Transfer the rabbits to a wire rack and let cool for 15 minutes before serving.

Lora Wiley-Lennartz is an Emmy nominated television producer and a food/destination blogger who splits her time between Germany and New York City. Read her blog Diary of a Mad Hausfrau or follow her on Facebook for traditional German recipes with a twist.