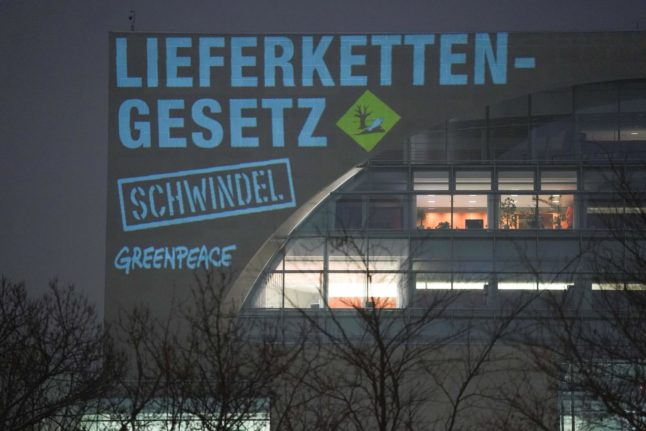 The law was spurred on by a deadly fire in a textile factory in Pakistan and a devastating dam collapse at a Brazilian iron ore mine that killed more  than 250 people — both of which had links to German companies.

In a bid to prevent repeats of such workplace disasters, Chancellor Angela Merkel’s cabinet agreed on the new rule which provides for companies with annual revenues of €400 million or more to be fined up to two percent of that amount if their contractors abroad are found to breach human rights or environmental rules.

Companies could also be excluded from public procurement processes in case of violations, the government agreed, at a time when allegations are also ratcheting up over Uighur forced labour in China.

“In future, it will be clear that ‘Made in Germany’ also means respect for human rights,” he added.

The so-called Lieferkettengesetz — meaning “supply chain law” — obliges companies to track workers’ rights and environmental standards, not just in their own structures but also at their sub-contractors or suppliers at home and abroad.

Companies will have to verify possible standards violations in their supply chain and take corrective measures.

Though businesses will not be made systematically liable for any shortcomings, NGOs and trade unions will be able to bring lawsuits against German companies on behalf of foreign workers.

This would give workers “in Bangladesh or the Congo a fair chance to defend  their rights”, said Heil.

Germany’s economy ministry will also establish a structure to carry out  checks and impose fines if necessary.

The catalogue of fines agreed by cabinet on Wednesday includes penalties  ranging from tens of thousands to millions of euros.

A hard-fought compromise between conservatives and social democrats of  Germany’s ruling coalition, the law still must be approved by parliament later  this year.

It will at first apply only to Germany’s largest companies with over 3,000  employees, before being expanded to include those with 1,000 employees from  2024.

The development and labour ministries initially wanted the law to also target smaller companies, but backed down in the face of strong opposition  from the economy ministry and industry voices.

A similar French law adopted in 2017 covers only companies with more than 5,000 employees.

German environmental and human rights groups, who have long campaigned for  the law, accused Merkel’s government of “watering down” the initial proposal.

The platform Lieferkettengesetz.de, which collected over 200,000 signatures  while petitioning for the law last year, said Monday that the draft law had  “massive weaknesses” and “needed to be improved”.

But industry lobbyists have called for less stringent rules.

“A national law will not do justice to the aim of strengthening human  rights,” said the Chemical Industry Association (VCI), calling instead for a  “European initiative”.

Chemical giant BASF and carmaker Volkswagen are among Germany’s biggest  companies which have production plants in Xinjiang province, where China is accused of serious violations against Uighurs.