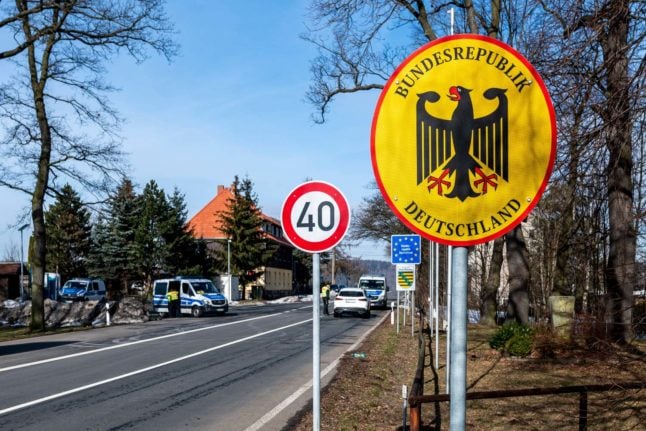 Police at the Czech-German border on Sunday. Photo: DPA

Several regulations are disproportionate or unjustified, the EU Commission wrote in a letter of complaint to Germany’s EU Ambassador Michael Clauss in Brussels.

“We believe that Germany’s understandable objective – to protect public health in a pandemic – could be achieved by less restrictive measures.”

READ ALSO: What you need to know about Germany’s new border closures

Currently, only Germans and foreigners with residency permits in Germany are allowed to enter from the Czech Republic, Slovakia and large parts of Austria’s Tyrol regions. There are exceptions for truck drivers and commuters.

The EU Commission now expects a response within 10 working days. Theoretically, it could initiate legal proceedings against Germany, but this is considered unlikely due to the ongoing pandemic.

Similar letters have been sent to Belgium, Hungary, Denmark, Sweden and Finland, as Brussels also disagrees with these border measures.

In the four-page letter, the Commission requested, among other things, information on the basis in which the Czech Republic and Slovakia were declared mutation areas. The Commission is also dissatisfied with the exceptions to the entry ban.

For example, it said, there is no exception for families living across borders. In addition, it appears that members of the EU Parliament or members of the government are not allowed to cross Germany to attend EU meetings.

The Commission also criticised the requirements for truck drivers. For example, they would have to submit a coronavirus test that is no more than 48 hours old, even if they had only passed through the variant areas.

The recommendations of the EU states, on the other hand, stipulate that transport workers do not usually have to take a test – and if they do, it should be a rapid test.

In the worst case, she said, this would shut down the free movement of goods and services from a neighbouring country.

The intra-European dispute over border closures to contain the pandemic is also the subject of an EU online summit this Thursday.

Since February 14th, the Czech Republic, Slovakia and Tyrol have been considered areas with particularly dangerous virus mutations in Germany.

Entry into Germany is therefore prohibited, with a few exceptions. German Interior Minister Horst Seehofer feels that the border controls, initially put in place for ten days, should be extended.