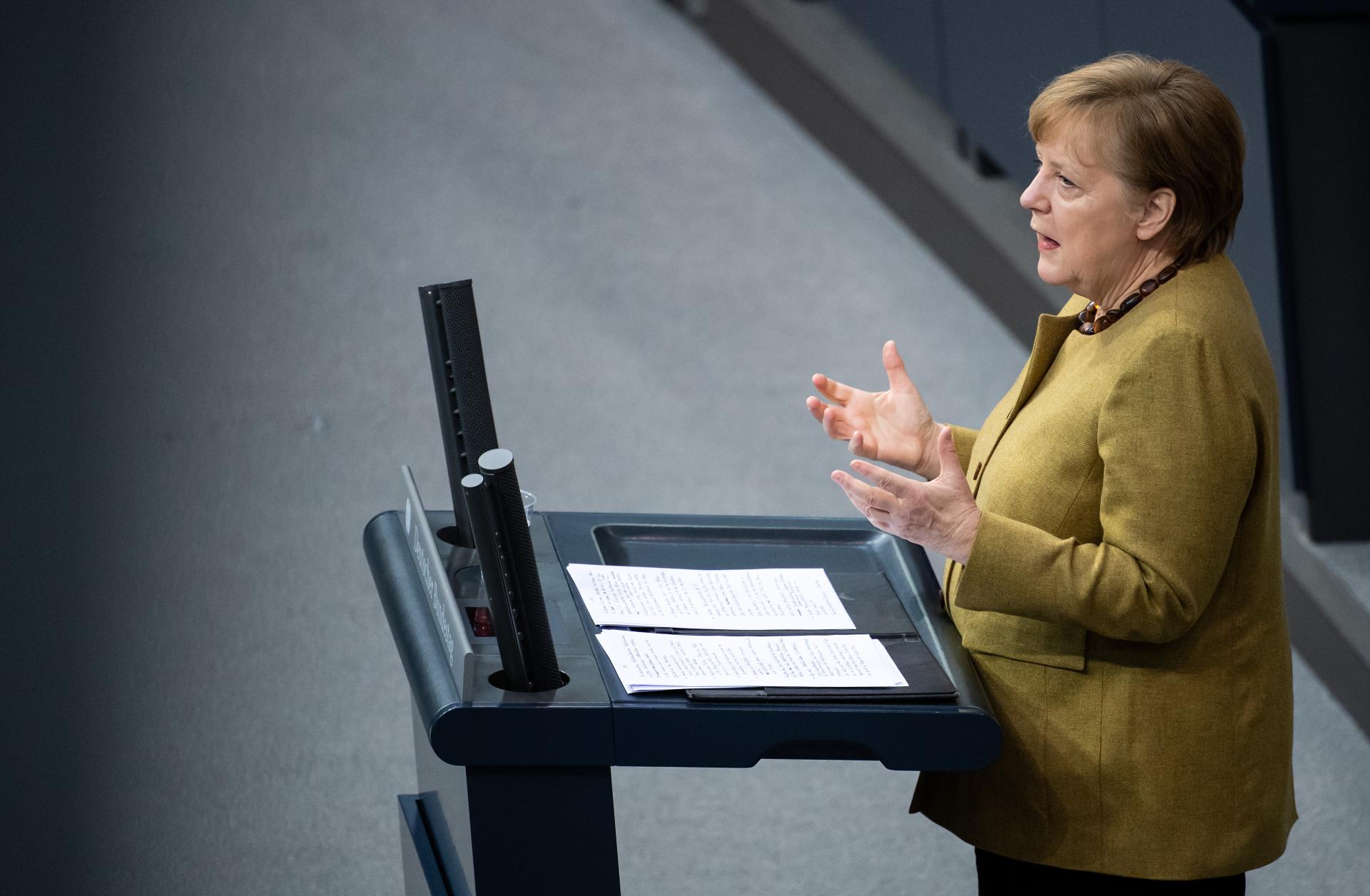 Merkel speaking to the Bundestag on Thursday morning. Photo: DPA

“We have come a long way in this year of the pandemic, a very long way.” Together, she said, we succeeded in preventing the health care system from being overburdened.

“Vaccination is gaining momentum. Infection numbers are on the way down.”

But a major threat makes extending the lockdown necessary, she said.

Covid-19 mutations, which have now been detected in 13 out of 16 German states, have led to more aggressive viral variants, she said.

“The vast majority of the restrictive measures must be maintained consistently,” stressed the Chancellor.

The virus doesn't listen to dates, said Merkel, pointing out that it's difficult to give specific days when businesses and other institutions can reopen. Rather, it depends on infection numbers and how quickly they spread.

“We're sort of going into a battle with the virus, which is our opponent,” she said.

Merkel also admitted that Germany made mistakes in its handing of the pandemic in the late summer. In spring 2020, the country was generally lauded for keeping new infection numbers low.

However, the government's approach at the end of summer and beginning of autumn, she said, was “too hesitant”.

“Then we were not careful enough and not fast enough,” she said.

Originally Merkel called for the current shutdown – set to last until Sunday February 14th – to be extended to March 15th, but she reached a compromise with state leaders on Wednesday evening.

She had wanted school openings to be decided on the basis of incidence, but accepted that it would be up for individual states to decide their own opening times.

Both Merkel and state leaders also agreed for hair salons – which had to close in mid-December – to be able to reopen on March 1st, citing “personal hygiene” reasons.

Merkel said she understood the difficulties everyone in the country is going through, and vowed to lift restrictions as soon as possible.

However, while several health care workers lauded Merkel’s speech, it was also met with criticism in follow-up speeches from other Bundestag members.

“The children in this country deserve much better,” said Green party parliamentary leader Katrin Göring-Eckardt, stressing that school shutdowns have dragged on too long and that reopenings could be facilitated again nationwide with the the help of rapid tests.

He criticised the toll that extending the lockdown would take on businesses, many which have been closed since Germany first introduced a “lockdown light” at the beginning of November.

As of Thursday morning, Germany had a rate of 64 new infections per 100,000 people in the population, according to the Robert Koch Institute, and 10,237 infections within the last 24 hours. There were 666 new deaths within the same time period.