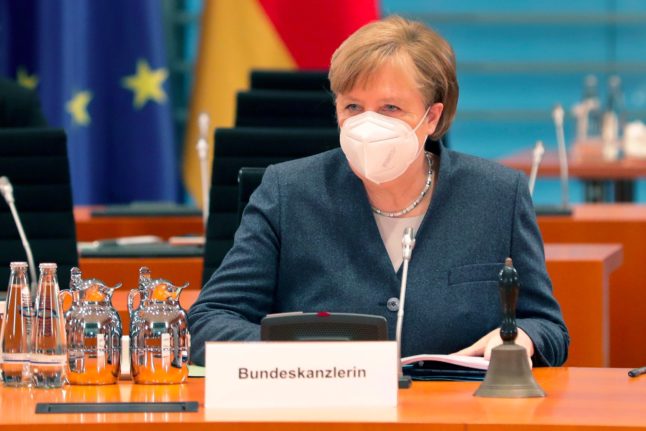 As fatigue grows with the partial lockdown in Europe's top economy, Merkel advised against any loosening of the measures before March 1st.

“We would gain nothing if we left lockdown prematurely,” Merkel told members of her CDU party according to meeting participants, ahead of talks Wednesday to set policy on the restrictions.

She said first steps toward a reopening could begin in early March with schools and nurseries, shops and hairdressers but only with clear rules to prevent the spread of the virus.

Otherwise, she argued, “the infection rates could soar again”, the sources quoted her as saying.

The veteran chancellor expressed understanding for “the difficult situation and great challenges for children, families and retailers” but asked for patience to avoid an endless cycle of openings and shutdowns.

Although a majority of Germans still back Merkel's science-based management of the crisis, weariness is setting in after three long winter months of restrictions and amid a sluggish vaccine rollout.

As the campaign for a general election in September to replace the outgoing Merkel begins to take shape, raising the political stakes, a YouGov poll this week showed that just half of Germans wanted current measures to be maintained or tightened.

That was down from nearly 65 percent in early January, when new daily infections were still near 20,000 with roughly 1,000 deaths a day reported.

Since then, new Covid-19 cases have dropped considerably and the seven-day incidence rate — the number of new infections per 100,000 inhabitants over the past week — has fallen below 75 for the first time since November.

But deaths remain troublingly high at nearly 500 per day.

“We are over the worst of the second wave, but it is not over, of course,” Merkel's spokesman Steffen Seibert warned Monday.

The country closed restaurants, hotels, culture and leisure centres in November, followed by schools and non-essential shops in December. The measures have since been extended until February 14th.

Merkel and her advisors are nervously eyeing an uncontrolled spread of highly contagious coronavirus variants from Britain and South Africa which they fear could rapidly wipe out any progress made in fighting the pandemic.

Officials have called such “turbo” mutations, both of which have been detected in Germany, a “genuine threat”.

While Merkel's popularity soared due to her steady handling of the coronavirus outbreak and is still hovering at around 70 percent, only 55 percent of Germans said last week they were satisfied with her government's policies on the pandemic.

That figure was down five points since January and the lowest rating since the shutdown measures began last March.

The relatively slow distribution of vaccines within the EU has done much to sap good will, with 57 percent of Germans saying they don't believe Merkel's pledge that everyone who wants the jab will get one by the end of September.

The YouGov survey found that 19 percent blamed Merkel's government for the delays, 17 percent the EU and 11 percent the manufacturers. One-third of respondents said each shared equal responsibility.

The powerful Federation of German Industry (BDI) expressed exasperation with the government's incremental measures, demanding a “clear” roadmap with “fair” criteria for reopening the economy.

Conservative daily Frankfurter Allgemeine Zeitung said the German decision-making was complicated by a look around Europe, where even countries with much higher infection rates and death tolls had granted their citizens greater freedoms.

“Hairdressers are opening in Austria, shoppers are thronging the Champs-Elysees in Paris, as cinemas reopen in Belgium,” it said, while adding that “no country has really found the miracle cure to all of this”.

By Deborah COLE and Peter WUETHERICH