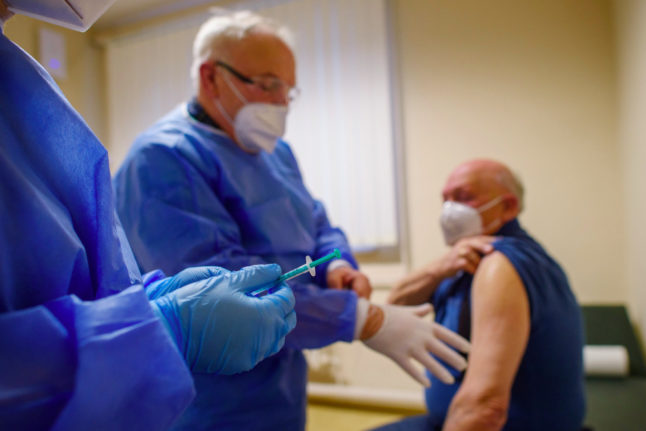 A patient being vaccinated in Stendal, Saxony-Anhalt in January. Photo: DPA

“I am happy to tell you that we have the necessary capacities to produce CureVac's mRNA-based vaccine,” Bayer's head of pharmaceuticals Stefan Oelrich told reporters.

He added that the company aimed to produce 160 million doses in the first 12 months.

The announcement came hours before German political leaders and vaccine makers were to meet amid ongoing frustration over the EU's sluggish inoculation campaign.

“Our discussions with the government have made it clear that vaccine availability must be increased,” said Oelrich, on a call alongside German Health Minister Jens Spahn.

While Bayer had no experience producing vaccines, the company did offer “strong know-how in the development of biotech products”, he added.

CureVac's mRNA vaccine is yet to receive the green light from regulators, but Health Minister Spahn said Monday it was “on its way to approval in the coming weeks”.

CureVac began the final Phase III trials of its vaccine candidate in mid-December, involving more then 35,000 volunteers in Europe and Latin America.

CureVac CEO Franz-Werner Haas said his company would also produce several hundred million doses of its own vaccine by the end of 2021.

The German government in June took a 23-percent stake in the company for €300 million ($369 million). It also provided a €252 million grant for coronavirus research.

CureVac made international headlines in March when rumours surfaced that then US president Donald Trump wanted exclusive US access to its coronavirus vaccine, a claim both sides denied.

Pfizer  and Germany's BioNTech to ramp up production

Meanwhile, BioNTech and Pfizer said Monday they will ramp up their coronavirus vaccine deliveries to the EU, pledging to send up to 75 million extra doses to the bloc in the spring.

“Pfizer and BioNTech continue to work toward increased deliveries beginning the week of February 15th, ensuring we will supply the full quantity of vaccine doses in the first quarter we contractually committed to and up to an additional 75 million doses to the European Union in the second quarter,” they said in a statement.

The EU has ordered a total of 600 million doses of their Comirnaty vaccine.

BioNTech and Pfizer, which will take part in the summit later on Monday, said that improvements in their production capabilities would allow them to speed up supplies.

These included the completion of modifications at Pfizer's plant in Puurs, Belgium. “Now, we are back to the original schedule of vaccine dose deliveries,” they said.

BioNTech's manufacturing site in the German city of Marburg has meanwhile received a licence to start production this month, as the companies have expanded their network of European supply partners to 13.

“We're further strengthening this network, and are now in discussions with additional qualified partners on potential new agreements,” they said.

Their announcement in mid-January that they would delay shipments of the jabs due to the necessary modifications at the Puurs factory sparked ire across the bloc.

Germany at the time urged the European Commission – which undertook joint procurement for the bloc – to “seek clarity and certainty” for upcoming shipments.

And six northern EU nations warned in a letter to the Commission that the “unacceptable” situation “decreases the credibility of the vaccination process”.

The news was followed last week by an announcement from British-Swedish company AstraZeneca that it could deliver only a quarter of the doses originally promised to the bloc this winter because of problems at one of its European factories.

In the face of a political firestorm, European Commission chief Ursula von der Leyen said Sunday that AstraZeneca had now agreed to increase its coronavirus vaccine deliveries to the EU by 30 percent.

An EU source said the first deliveries would start in the second week of February.