The following column was written by Sarah Serafini and Dennis Frasch and appeared in Swiss news outlet Watson on Thursday, January 21st. It has been translated from German and republished by The Local Switzerland with permission.

Why Germany closed the schools
Lockdown measures have been in force in Germany since November. In mid-December, the restrictions were tightened with Schools and daycare centres largely closed, only offering emergency care.
On Tuesday, Chancellor Angela Merkel and state premiers decided that the measures would be extended until at least February 14th.
An exception will be made for graduating classes.
Parents will be given additional opportunities to take paid leave to care for children.
Merkel said Tuesday that the decision over schools had been “long wrestled over”. She said there were “serious indications” that the new virus mutations could also spread more among children and young people.
The fact is that, as in Switzerland, the role of children has been disputed in Germany since the beginning of the pandemic.
The assessments range from “virus slingers” to being “uninvolved in the infection process”.

The studies to date contradict each other in part.
There is scientific evidence on how often schoolchildren contract coronavirus, but not on how often the infections go unnoticed because they have an asymptomatic course.
According to a study by Berlin virologist Christian Drosten, there is no evidence that children with Sars-CoV-2 are not as contagious as adults. The fear is that children, even if they have few symptoms, can still pass on the disease.
This is probably the most crucial argument why the federal government decided to close the schools. “The question is, do we play it safe or not?”
This is how Merkel is said to have formulated the alternatives to closing schools during a meeting.
Where Switzerland stands
While Merkel brought school closures into play early on as a possible measure, this was always rejected as a last resort in Switzerland after the first lockdown in the spring.
Since the special situation has been in effect again in Switzerland, responsibility for school openings or closings rests with the cantons.
As a rule, face-to-face classes were held again at all schools after the summer vacation. In some cases, individual universities held online lectures.
At the beginning of November, the Federal Council banned face-to-face teaching at universities and secondary schools for an indefinite period.
EXPLAINED: What are the details of Switzerland's new coronavirus restrictions?
Compulsory masks were introduced in schools from secondary level 2 onwards. Individual cantons go further and require mask-wearing in class even for upper grades of compulsory education.
Before the Christmas vacations, there was a heated debate about extended vacations over the festive season and after New Year.
The Federal Council left the decision to the cantons. Accordingly, some schools were closed a week before Christmas, and high schools were given distance learning in January for the time being.
From the third week of January, when the first infections of schoolgirls with the mutated virus variant B.1.1.7 became known, the Swiss school system degenerated into a patchwork quilt.
The winter sports resort of Wengen closed its schools, in the canton of Ticino 500 pupils and 70 teachers had to be quarantined, in Frauenfeld an entire class of 100 schoolgirls, and quarantine orders were also issued in the cantons of Zug and Zurich.
In Kilchberg in Canton Zurich, an entire school was closed after a student contracted the mutated virus.
In the canton of Basel Country, the mask obligation now applies to pupils from the 5th primary class, in Volketswil in the Zurich Oberland, the children of a school house are subjected to a rapid test.
On Wednesday, the Federal Council wrote in a statement that it continues to advise against nationwide school closures. It is now examining possible scenarios for secondary levels 1 and 2 – if the situation worsens. 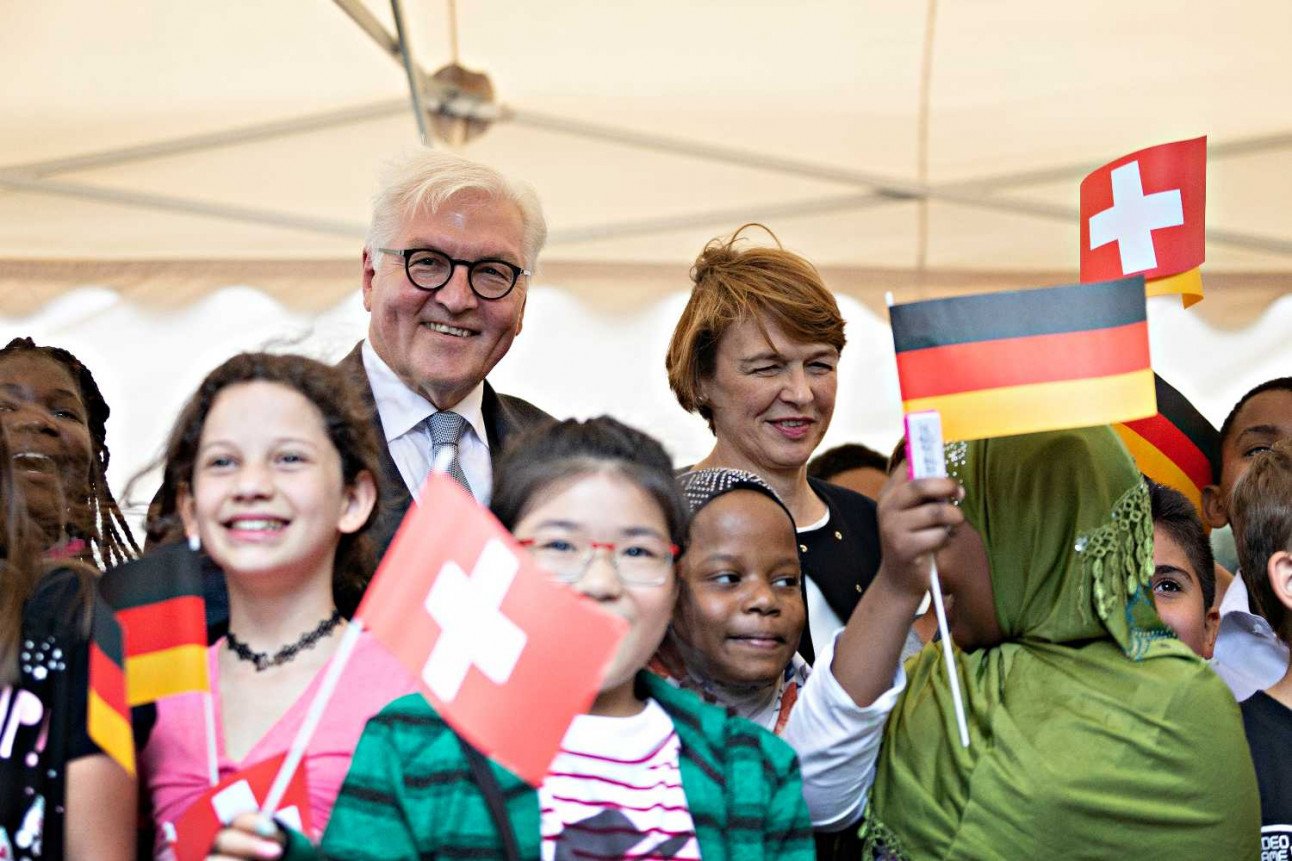 German President Frank-Walter Steinmeier (L/REAR) and his wife Elke Buedenbender (C/REAR). Photo: MICHELE LIMINA / AFP
Teachers and their risk of infection
With viral mutation spreading in classrooms, teachers' fear of infection is rising.
They are calling for vaccination priority or free FFP2 masks. How exposed teachers are to infection is not well understood. The same applies to whether the mutation is more dangerous for children than the conventional variant.
Based on cantonal data, a journalist from SRF calculated that teachers in Basel-Landschaft have twice the risk of contracting Sars-CoV-2.
Of 291,919 people in the canton, 3.6 percent would have contracted the coronavirus. Of the 3046 teachers at the primary level, 6.3 percent tested positive.
The “Ciao Corona” study of the University of Zurich, in which 2500 schoolchildren and teachers were tested for antibodies in October and November, came to a different conclusion.
The study showed that the children and teachers were infected with practically the same frequency as the average population. No cluster occurred at any school, the study leaders said.
UPDATE: Switzerland to add more regions from neighbouring countries to quarantine list
A large-scale Israeli study published at the end of October by the Israeli Ministry of Health provides information on the infection rate among children.
It examined some 680,000 PCR tests in children and 2.6 million adults. The positivity rate was eight percent among children, two percent higher than among adults.
The difference was even more striking for antibody tests. 7.1 percent of children tested had antibodies, compared to between 1.7 and 4.8 percent of adults.
Although these figures clearly show that children are by no means immune to infection, this study does not provide any answers to the risk of transmission.
The question of mobility
At the beginning of January, ETH Zurich published a study that compared the mobility data of the Swiss resident population in spring 2020 with that of spring 2019.
Using anonymised cell phone data, the researchers were able to demonstrate exactly how individual measures have affected the mobility of the population.
The researchers concluded that school closures were among the most effective measures in reducing mobility. A reduction of almost 22 percent compared to the previous year was found.
Only person restrictions of five people (24.9 percent) and closures of restaurants, bars and stores (22.3 percent) were more effective.
School closures cause not only students and teachers to stay home, but also parents. And a general reduction in mobility has the effect of making it harder for the virus to spread.
The consequences of school closures
Although evidence of the positive epidemiological effects of school closures is accumulating, there is reluctance in Switzerland to close educational institutions again.
Even the task force is currently still against it.
Why? On the one hand, because it is still not clear exactly what role children actually play in this pandemic, and on the other hand, because the effects on children can be severe.
For example, Switzerland's top teacher, Dagmar Rösler, told SRF, “We found that about a third of the students in distance learning learned little to nothing in the spring.”
READ MORE: Is the pandemic to blame for Switzerland's spate of avalanche deaths?
There are likely socioeconomic reasons behind this. Children from lower social classes in particular often lack the right infrastructure to be able to learn from home.
This may be because there is not enough space or the laptop is not good enough.
Studies indicate that such out-of-school factors are one of the main reasons for inequalities in educational outcomes.
Other studies indicate that school closures can affect personal development because children lack social interaction with peers.
Likewise, psychological well-being can be disrupted.
“School closures light” as a middle ground
All these dimensions make it extremely difficult for politicians to enforce school closures. And yet, with the emergence of new viral mutations from the UK and South Africa, the move seems increasingly inevitable.
However, there are opportunities for graduation that could protect poorer-off children in particular from negative consequences.
In Germany, for example, children are entitled to emergency care if their parents are deemed indispensable by their employers or if it is unavoidable for the child's well-being.
There are also approaches to an emergency model in Switzerland. For example, Stefan Wolter, an education economist and member of the Science Taskforce, suggested that schools should remain open even during the transition to distance learning, and that individual students should be offered a job and receive support from teachers.
“The apprentice carpenter has to practice on the machine, a weak student needs additional support, and not everywhere does the home situation allow for learning equally well,” Wolter told Watson.
There is also the possibility of closing only middle and vocational schools as a first step, since children in adolescence suffer far less from closures than those in the primary grades and before.
At present, there are increasing signs that the Federal Council is considering such partial closures.
It has requested reports from the task force and the Conference of Cantonal Ministers of Education on possible further measures.

The following column was written by Sarah Serafini and Dennis Frasch and appeared in Swiss news outlet Watson on Thursday, January 21st. It has been translated from German and republished by The Local Switzerland with permission.