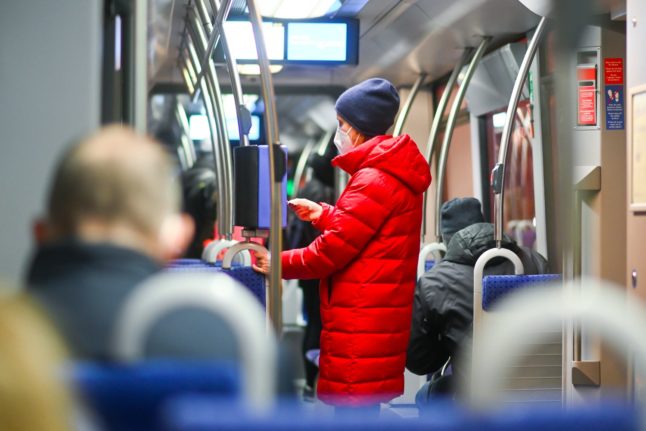 A woman wearing an FFP2 mask in Munich on Monday. Photo: DPA

From today, Bavaria requires residents to wear an FFP2 mask while travelling on public transport. And it's not the only area where the southern state is stricter than other places.

Now as Chancellor Angela Merkel and the 16 state leaders get ready to meet on Tuesday, the question is: could the Bavarian regulations set a precedent nationwide?

What's on the agenda for Tuesday's meeting?

As we have been reporting, authorities are worried about the current lockdown measures not being effective enough.

There are also major concerns about the Covid-19 variants, such as the one that originated in the UK, spreading rapidly in Germany.

With this in mind, the federal-state talks have been brought forward from January 25th to January 19th to discuss how Germany can tackle the problems.

On the agenda is likely to be the possible introduction of curfews and compulsory FFP2 masks nationwide – both of which are already in place in Bavaria.

Other topics such as how to limit the number of people using public transport and how to get more people to work from home will also be discussed.

“There is a selection of possibilities on the table,” Federal Minister of Economics Peter Altmaier of the Christian Democrats (CDU) told the Rheinische Post.

Meanwhile, Vice Chancellor Olaf Scholz, of the Social Democrats (SPD) said he expected the federal and state governments to tighten restrictions and extend them by two weeks.

What exactly are the measures in Bavaria?

In Bavaria, the worst-hit coronavirus region in Germany, people now have to wear FFP2 protective masks on buses, trams, underground and suburban trains and in all shops.

READ ALSO: What you need to know about Bavaria's new FFP2 mask obligation

A night-time curfew is also already in place in the state, which means people must stay inside from 9pm to 5am unless there is a valid reason to be outside during this time (such as for work or a medical emergency).

Before the consultations on Tuesday, Bavaria's state premier Markus Söder said he believed his own state is well positioned in the fight against the pandemic. “I don't think we need to tighten any more screws,” said the Christian Social Union (CSU) leader on broadcaster ARD on Sunday.

Instead, Söder called on the other states to implement the decisions taken at the federal-state conference more consistently.

“Half of the Länder (states) are doing something completely different,” he said. “So you also have to ask the question again and again: why do we decide on something when half of them do it differently?”

Söder called for consistent application and implementation of what is decided by Merkel and the 16 state leaders.

“I also don't think much of endless differences – because only what applies to everyone is understandable,” he said.

Söder sees the regulations in Bavaria as a kind of blueprint for federal regulations.

According to Business Insider, the chancellor's office wants to introduce a nationwide uniform night-time curfew, as already exists in France or other neighbouring countries. However, a majority of federal states would have to agree to that.

Vice-Chancellor Olaf Scholz told German daily Bild: : “Further measures must be taken.” (…). “I assume that this could be as little as 14 days added to that.” The Vice-Chancellor did not want to rule out the possibility of curfews: “I think that's a possible measure, but not the very first one.”

What are others saying?

Social Democrat (SPD) health politician Karl Lauterbach advocated a hard, three-week lockdown. The spread of the mutation in Germany must be prevented at all costs, he wrote on Twitter early on Monday morning.

Otherwise, the mutation will spread “faster than we can vaccinate”. In his view, curfews after 8pm for three weeks are justifiable. For public transport, he argues for caps on the number of people who can travel at one time, and mandatory FFP2 masks.

On Monday, the leaders of the federal and state governments will be informed by leading scientists, such as Christian Drosten and the Robert Koch Institute, on what the situation currently is in Germany, and how fast the variants are spreading.

The meeting on Tuesday is expected to take place at 2pm.

However, there is hope ahead. Vaccinations are continuing in Germany, with more than a million people receiving their first jab so far.

Virologist Marylyn Addo, head of the Infectiology Section of the University Medical Centre Hamburg-Eppendorf (UKE), told FAZ that she expects the pandemic to ease considerably from spring onwards and in the summer “because of the warmer weather and the higher vaccination rate”.