As the number of Covid-19 deaths increase in Germany, crematoriums are having to find new ways to cope. And workers there have a message for coronavirus deniers.

Some coffins are marked “infection risk”, others have “corona” scrawled in chalk, many have the box for “no memorial service” ticked, though the hall for such ceremonies has been turned into a temporary mortuary anyway.

As Germany's Meißen crematorium struggles to cope with an explosion in deaths from the coronavirus pandemic in the region, coffins are stacked up to three high or even stored in hallways awaiting cremation.

Largely spared in the first wave of the outbreak, the eastern state of Saxony has topped Germany's worst-hit zone for weeks in the second wave.

READ ALSO: Why has Saxony been hit so hard by the winter wave of the coronavirus pandemic?

In the three decades he has worked at the crematorium in Meißen, Jörg Schaldach has not seen such high numbers of deaths sustained over such a long period of time.

“It started in mid-November, the numbers kept rising,” Schaldach, who runs the site, told AFP.

“The problem is that the cold storage capacity is now full. We are in a state of catastrophe,” he said, explaining that there was no choice but to use the memorial hall to hold bodies.

Benches and chairs usually used by mourners at memorial services have been stacked up at the back.

In their place are rows of wooden coffins, many with the telltale transparent film used to double-seal the bodies of Covid patients.

“We're now getting 400 in a week for cremation”, twice that of typical fatalities during the winter, said Schaldach.

As he spoke, his colleagues were shifting more coffins into the memorial hall in a bid to make space in the actual mortuary, which opens out to a loading bay where others were arriving. 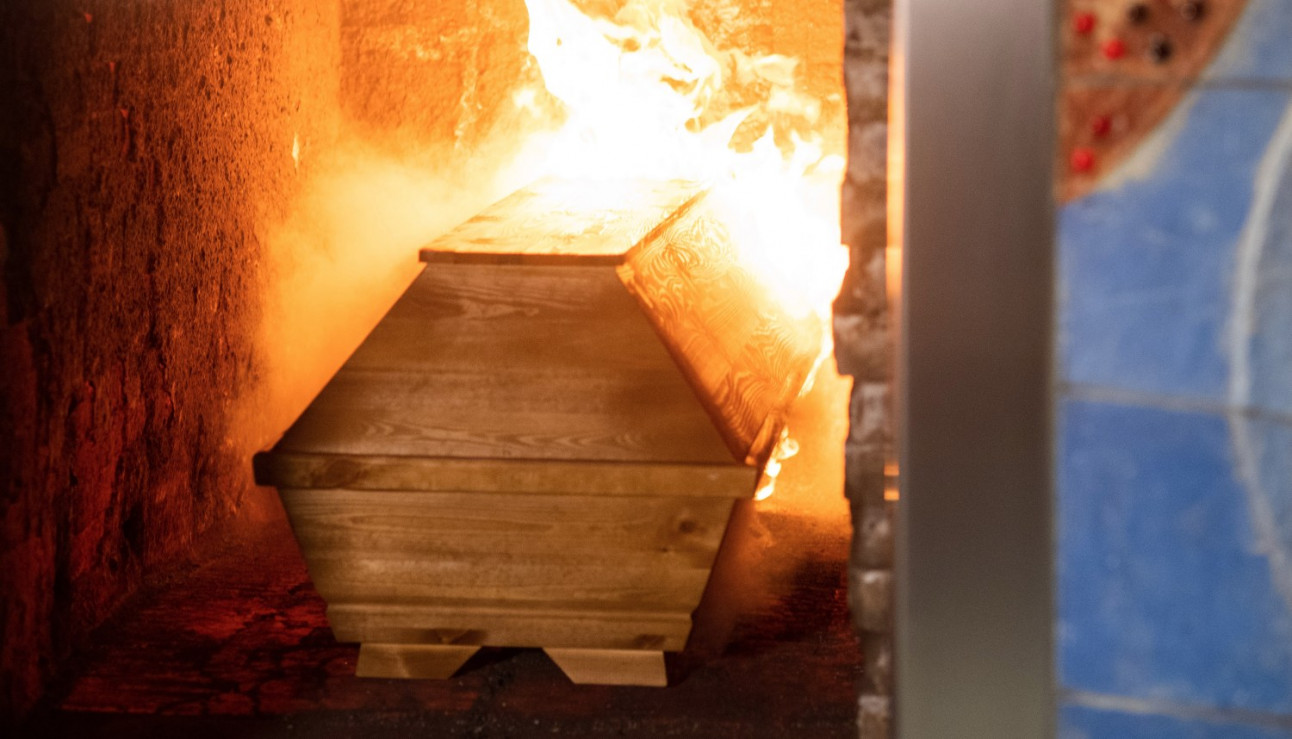 A cremation at a crematorium in the Celle, Lower Saxony on Wednesday. Photo: DPA

In the parking area, undertaker Matthias Möbius has already been waiting for an hour for space to unload the casket in his vehicle.

“They're packed right up to the door,” he said, pointing to where they would normally unload the coffins.

Behind him is a queue of casket vehicles — three other undertakers are waiting.

Möbius, who has been in the job for 20 years, said this winter had brought more work “by far” than he has ever had to handle.

To cope, Meißen crematorium is running 24 hours, seven days a week, with two furnaces in operation to cremate 60 bodies every day.

Staff are working overtime and giving up their weekends. Retirees have returned to help and even family members are chipping in.

Ingo Thöring, 76, who had worked at the crematorium since 1999 before his retirement, has come back to lend a hand even though his age places him in the risk group.

He accompanies coroners as they carry out the final viewing of corpses to ascertain their identities and determine if any qualify as suspicious cases.

Shrugging off the infection threat, Thöring said: “Fear is of no use at work. At my age, I'm no longer afraid.”

Germany shuttered restaurants and cultural or leisure facilities from November, and later also closed schools and most shops in December to halt the second wave.

But on Thursday, the country saw a new high in daily deaths, at 1,244.

Overall, the death toll stands at 43,881, according to the Robert Koch Institute. 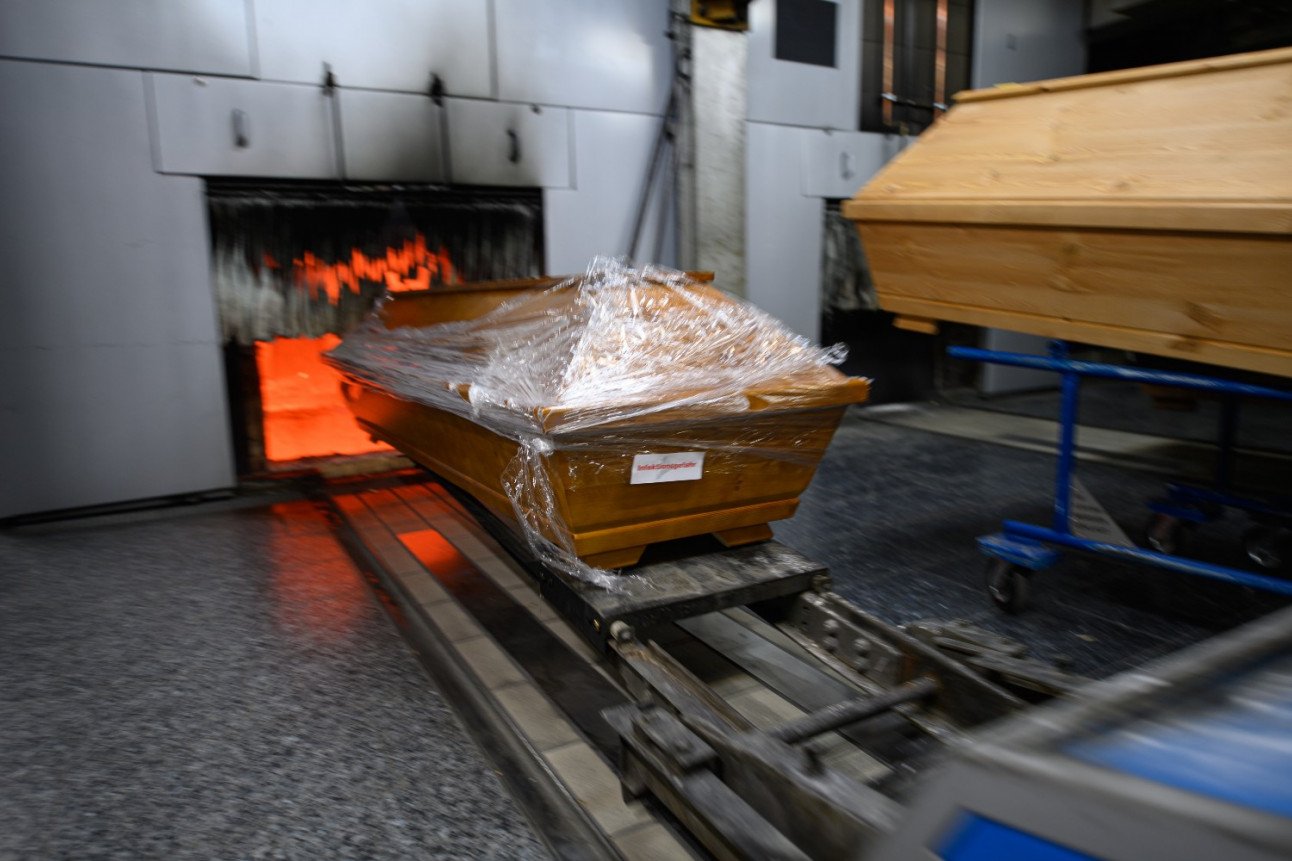 A body about to be cremated at the Meißen crematorium. Photo: DPA

Other crematoriums in coronavirus hotspots have also warned they are at their limit.

The city of Dresden on Wednesday said that a hall used to store flood protection equipment would serve as a temporary mortuary.

Nuremberg has brought in cold storage containers as the crematorium ran out of space.

Across the border on Monday, the Czech Republic said it was prohibiting cremations on its territory of bodies “imported” from neighbouring countries.

Schaldach believes that German authorities could have done more earlier to prevent the second wave of infections, including imposing mandatory testing at elderly care homes or tougher mask requirements.

“They were caught napping in the summer,” he said.

He believes corona deniers who travelled from all over Germany to the city of Leipzig in Saxony for a huge demonstration in November could have also helped spread the disease.

“What I would like to say to the corona sceptics is: come and join us, help us move the coffins.

“We have stacked up a whole lot of coffins — that means we have moved 750 tonnes of deceased (people).

“Some have the idea that all this is a movie scene that was shot in the summer,” he said. “The corona deniers… can come and touch all these (coffins) for themselves.”