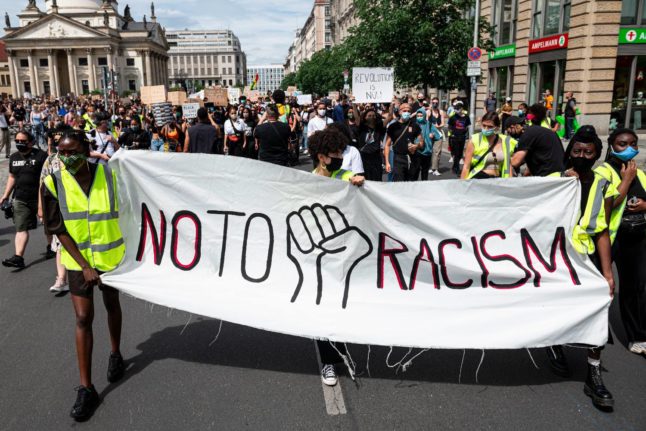 People at a Black Lives Matter protest in Berlin in July 2020. Photo: DPA

I keep thinking about a recent conversation with a Black friend who, after living in Germany for over a decade, has decided to leave for good. The uniquely laidback lifestyle and vibrant cultural scene in Berlin are a couple of the things he’ll miss. But one thing he won’t? “All the casual racism. For sure.”

Being a foreigner of colour myself, I know what he’s talking about. Microaggressions. Like the good beer and bureaucracy, they are also a local fixture.

They can be offhand and fleeting, intentional or not. Frustratingly, sometimes microaggressions come so out of left field you don’t even register them in the moment. Like the Five Point Palm Exploding Heart Technique from Kill Bill, you’re already a few steps away before thinking: “Wait a second – what did they just say?”

A couple of years ago, the #MeTwo campaign on Twitter, started by a German-Turkish activist inspired by #MeToo, brought commonplace instances of ethnic and racial discrimination in Germany to light.

Glib comments like being asked, “Where are you really from?” (The answer? Frankfurt) to remarks with far-reaching consequences, like teachers discriminating against students from ethnic minorities.

The tweet below shows the German Green party Cem Özdemir, who is of Turkish origin, discussing racism in schools.

Of my experiences, the one that first comes to mind is the many times that men here have referred to my Asian looks as “exotic” (often coupled with a creepy smile). As if I’m a flamingo or something.

READ ALSO: My experiences of everday racism in Germany

'I'm having a lot of difficult conversations'

Germany is a lodestar of liberal and progressive values. Yes, this is the same place where, in recent years, thousands nationwide have marched in demonstrations against populism and far-right sentiment.

That allowed over a million refugees during the refugee crisis to enter the country, and cheered them on with signs reading, “Welcome to Germany”. According to the Allensbach Institute, over half of Germany’s population aged 16 and over offered assistance to newcomers during those first few months.

Germans are fiercely protective of order and status quo. Uniformity and unwavering adherence to the rules ensures that past mistakes do not repeat.

When someone’s in the wrong, they will surely and swiftly be corrected, often loud and publicly. This reality allows for microaggressions to surface as Freudian slips. Their prevalence speaks to a larger systemic problem of discrimination beneath a society that wants to be known as accepting and tolerant.

A Black activist, for example, recently told me that local activist circles speak about Germany as being at least 20 years behind in how topics like race and discrimination are talked about compared to the United States.

An Asian-American friend, a recent transplant to Berlin, confirms this. “I feel the need to emphasize my American-ness in everyday situations to turn the focus away from the fact that I'm not white,” she says. “I’m having a lot of difficult conversations that I thought I was done having, like, 15 years ago.”

Although Germans are known for being straight-shooters in both the private and professional spheres, difficult topics like racism and sexism are still fumbled and shied away from.

There is fear associated with being viewed as unfair. A core belief in egalitarianism can often be misconstrued. An example: the Germans on social media who accidentally used the hashtag #AllLivesMatter to support Black Lives Matter, garnering comments like, “Er, I think you mean…”

How can Germany deal with this?

An obvious solution in advancing the conversation is more diverse representation in the leadership of German corporations and government. Case in point: Germany’s Cabinet Committee Responsible for Combating Right-Wing Extremism and Racism which does not have a person of colour.

This has garnered considerable discussion on Twitter, including from white male wonks who are keen to point out that cabinet committees can only be formed by certain top government members, making the choice limited.

Another solution would be for more German schools, universities, and companies to collect anonymized data on race, religion, sexual orientation, and so on. Many don’t. This would create more transparency in tackling discrimination, and its symptoms like microaggressions.

Berlin’s State Office for Equal Treatment and Against Discrimination (LADS) is making a progressive step. Earlier this year, Berlin became the first German state to pass an anti-discrimination law forbidding public authorities to show bias based on factors like skin colour and gender. With the new antidiscrimination app, AnDi, LADS says it hopes to “play a scientific role in investigating discrimination” and disseminating information about it.

Let’s see the way forward. Let’s see if “microaggression” finds its way into dialogue in Germany, perhaps even the Duden dictionary (maybe the term will already be antiquated – its already being rejected by anti-racism activists, like the author of “How to be Antiracist” Ibram X. Kendi, for reducing the severity of racist abuse).

Let’s see how widely the AnDi app will be used and whether it goes beyond a performative role. After all, speaking up about discrimination and microaggressions can be difficult emotional labour for marginalized folks.

Knowing change doesn’t happen in silence, I recently drummed up the courage to email a local business. An employee’s discriminatory comments during a one-on-one appointment made me feel scared and uncomfortable, and I didn’t want someone else to feel that way either.

Of course, there’s been no reply.