Germany has been in a state of shutdown since November, with the restrictions getting tougher each month. Do the latest rules go far enough?

Angela Merkel and Germany's 16 state leaders have extended the shutdown until the end of January, and tightened contact rules in a bid to reduce the number of coronavirus infections.

They want to get the numbers down to an average of 50 new infections per 100,000 residents in seven days. However, experts say the target should be even lower, particularly with the new Covid-19 variant complicating matters.

There is also disagreement on how tough the measures should be.

Under the new rules to help slow the spread, the government and states say private gatherings will only be allowed among members of your own household and with a maximum of one other person outside the household.

Plus, anyone living in a district with a seven-day incidence of more than 200 is now only allowed to travel within a 15-kilometre radius of the area they live in.

According to Chancellor Merkel, the 15 km radius has proved to be helpful in hard-hit Saxony, where it has been in force since mid-December. The aim is to stop people travelling to other areas for day trips.

Around 70 districts in Germany are currently affected.

Do the measures go far enough?

Merkel had wanted to introduce the 15 km rule to areas with an incidence number of 100 which would have affected most of Germany. However, she failed to push this through.

Other scientists agree with Merkel.

“I welcome the new measures, but would have liked the 15-kilometre rule to apply from an incidence of 100,” Thorsten Lehr, clinical pharmacy professor at Saarland University told Spiegel.

His research team has developed a 'Covid 19 simulator' that attempts to predict the course of the pandemic in Germany.

Tobias Kurth, professor of public health and epidemiology at the Charité in Berlin, told The Local the question of whether measures go far enough is “always difficult to answer”.

But he added:  “I would have also liked to see incentives to work from home wherever possible to reduce any unnecessary travel and work in common spaces.”

Merkel and states have urged employers to allow people to work from home, rather than issuing an order to employers.

Have the tighter measures in December made any difference?

November's lockdown light was credited for stopping exponential growth, but numbers started to grow again after a plateau. Tighter rules were brought in for December, but contact restrictions were eased over Christmas.

At first glance, the shutdown may look like it is having an impact. The daily reported infection numbers are going down, the reproductive value (R0 – the number of people a Covid infected person goes onto infect) is currently estimated at 0.82. During the spring lockdown the R-value in Germany dropped to 0.6.

Experts have hammered home the importance of getting it well under 1 to slow down the spread significantly.

But the current situation is more serious than the reported figures suggest.

The Robert Koch Institute (RKI) says there are uncertainties in the latest reports. That's down to fewer people taking tests as well as doctors, laboratory staff and public health office employees taking time off over the holidays. The test chain has been interrupted as a result.

Meanwhile, the country is holding its breath to see what the effects are from socialising and travel over the holidays.

Kurth said he is very worried. “We are seeing the consequences already – numbers remain high, with continuing overload in the hospitals.”

The below map by DPA shows the districts with the highest incidence numbers in Germany. Areas coloured with dark red, which have an incidence rate of over 200 new infections per 100,000 residents in seven days, will face the restricted movement rule – if the state they are in decides to implement it. 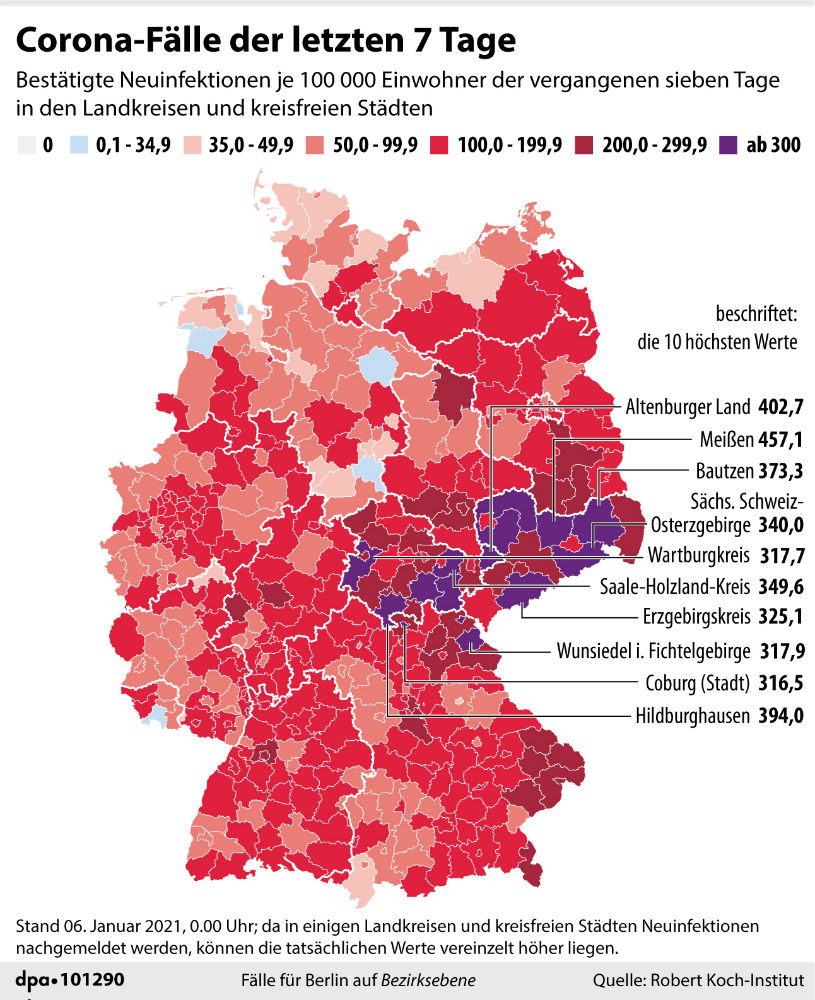 Why aren't measures having a big impact?

There could be several reasons for measures not having the desired effect. Perhaps it's that people are not cutting down on socialising as much as they did in spring. Or maybe tougher action was needed sooner, or clearer messages from the government.

“It would have been better to take tougher measures for a short time, then we wouldn't have such infection figures now,” Lehr said.

Furthermore, the virus has an easier time spreading in the winter months, and reported infection numbers were much higher at the start of the current shutdown than they were at the beginning of last year.

“Our simulations show that the current lockdown is not sufficient to get the infection incidence under control in a timely manner. Further tightening was urgently needed in our view,” Lehr said.

There's also the new coronavirus variant to contend with.

Whatever the case, hospitals are not seeing any lockdown effects at the moment.

“We always feel an effect of the lockdown in intensive care units with a delay of 14 days to three weeks – but at the moment there is nothing at all,” said the new President of the German Interdisciplinary Association for Intensive Care and Emergency Medicine (DIVI), Professor Gernot Marx from Aachen University Hospital.

“From a medical point of view, we can therefore absolutely not yet afford to relax measures, allow more people to meet or open shops,” he said.

Marx said the situation could be assessed again at January 11th at the earliest when figures become more reliable.

“This is another reason why a continuation of the lockdown is unavoidable: the wards are full,” Marx said.

When will restrictions be relaxed?

The question now is how long will the lockdown be in place.

German authorities have set a target to reach 50 new infections per 100,000 inhabitants within seven days. The national average is currently around 130.

Now here's the science part: if the current trend continues, that goal will not be reached until around February 10th, according to calculations by Lehr's research team.

If the reproductive number (R0) can be pushed down to 0.6 as it was in spring, it could be reached by about January 26th.

According to Lehr's calculations, Germany could get down to a seven-day incidence of 25 new infections per 100,000 people (rather than 50) by February 7th with a 0.6 R number.

States with low infection figures, such as Mecklenburg-Western Pomerania, could even reach that target as early as mid-January. Regions that are particularly badly affected, such as Saxony, would need up to four weeks longer to achieve comparable levels.

However, it remains to be seen whether the additional measures that are now being adopted throughout states will be sufficient to push the reproductive number down.

Kurth said he feared restrictions would have to be extended into February. “As much as I wish, I do not think that we can lift all restrictions, if any,” he said.

He said he understood that people were tired of the measures in Germany, but added: “On the other hand, we never had a real strict lockdown as in other countries. As for now we simply must urgently get the infection rate down.
“Looking at England and particularly London, we see what can happen if we do not react and really reduce the number of people we see. Over the last weeks, we have not really done this.”
In the meantime, Germany is working on the vaccination rollout.
Lehr, of Saarland University, compared the current situation to a marathon. “At kilometre 30 it hurts like hell, but the finish line is in sight.”