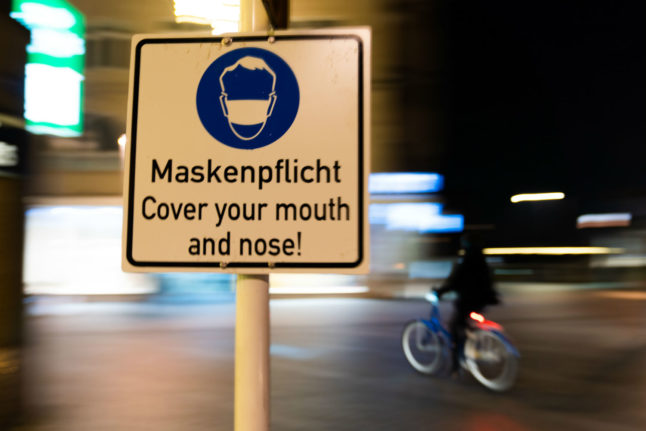 A cyclist in Bamberg on December 21st. Photo: DPA

Germany-wide there is a shutdown in place until January 10th, which has seen most non-essential shops and services close, schools and Kitas shut their doors, and curfews put in place.

Bavaria, Germany's most populous state in terms of area, has gone an extra step through a strict nighttime curfew, public alcohol ban and harsher enforcement of penalties.

We break down what you need to know ahead of the Christmas and New Year's holidays.

Which meetings are still allowed?

Only two households and a maximum of five people are allowed to meet each other (children under the age of 14 are not included).

The Bavarian state government defines the term “household” to mean people who live together – so it doesn’t apply to friends or partners who are only visiting.

Are there exceptions for Christmas and New Year's Eve?

From December 24th to 26th, a slightly less strict rule for gatherings applies. All members of a household are allowed to meet with four other people, who may come from up to four different households (children under 14 are not counted).

However, this rule only applies to the closest family circle, such as spouses, partners and direct relatives such as parents, siblings, nieces or nephews and their respective household members.

An example: A family of four living under one roof may receive visits from their son who lives far away and his girlfriend who lives with him, as well as the grandparents. Outside the Christmas holidays, these exceptions do not apply.

On New Year's Eve, a maximum of five people from two households are allowed to meet.

Which rules apply for returning travellers?

As of Wednesday December 23rd, anyone arriving from a risk area abroad must be quarantined for ten days. This can be ended after five days at the earliest through a negative coronavirus test.

Furthermore, all returnees from risk areas must submit a negative test result to the responsible health office within 72 hours of entry.

According to the State Chancellery, test centres at the airports or the municipal centres have been set up. Signs on motorways have also been put in place to remind people of the new obligation. Ideally, the test should be carried out abroad, but no more than 48 hours before entering Bavaria.

What are the rules for Bavaria’s night curfew?

Between 9 pm and 5 am there is a curfew in place for the whole of Bavaria. Anyone who wants to leave the house may only do so for a valid reason. These include going to or from work, medical emergencies, exercising custody rights, accompanying the dying, caring for people in need of support that cannot be postponed or walking the dog. Accordingly, night-time walks, outdoor sports or visiting partners and friends are not permitted.

Those who violate the curfew will have to pay a fine of at least €500. Regardless of the time of day, it is also forbidden to drink alcohol in public. A sign in Schwangau advises people to keep a 1.5 metre distance from each other. Photo: DPA

Does the curfew also apply over Christmas and New Year's Eve?

Yes, the curfew also applies over the Christmas holidays and on New Year's Eve. Anyone who wants to drive home after a party must make sure to be at their destination by 9 pm.

State Premiere Markus Söder has made it clear, however, that if you were not home until 9.01 p.m. or 9.15 p.m., controls would be carried out “with a sense of proportion”. As an alternative to going home, overnight stays are allowed.

Do the same rules apply on Christmas and New Year’s Eve?

On Christmas Eve, the regulation also affects churchgoers. State Chancellery head Florian Herrmann said on Monday: It would be good if church services were planned “so that people could be home by 9 pm”.

Among other things, the state government wants to talk with the churches about the possibility of bringing Christmas masses significantly earlier. Traditionally, these services only begin at midnight or shortly before.

This means that private individuals are not allowed to set off fireworks on public property or watch them in the open air at the turn of the year – except from their own balcony or garden.

What rules apply to schools and Kitas?

Kitas, day nurseries, holiday day care and organised playgroups will be closed until at least January 10th, but parents who need to work can receive emergency care. Music schools and driving schools are only allowed to teach online.

Is visiting possible in care and nursing homes?

Residents are only allowed to receive one guest per day. Anyone coming to visit must present a negative coronavirus test and wear an FFP2 mask.