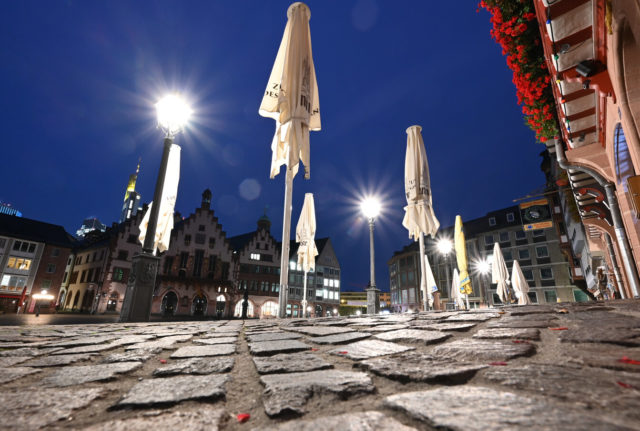 Closed restaurants in the centre of Frankfurt. Photo: DPA

“To date, only a fraction of the urgently needed liquidity has reached distressed companies, and many small and medium-sized enterprises are on the verge of insolvency,” states a letter from the German Federation of Small and Medium-Sized Businesses to German Economics Minister Peter Altmaier (CDU).

The letter was made to available to the German Press Agency.

If the aid were to be first paid out in January that would be “unacceptable” and lead to “extreme frustration” among many companies, the letter states. The financial pain would be compounded by the fact that the second batch of aid for December can only be applied for in January.

“We urge you to work with the Federal Minister of Finance to find a solution quickly and without red tape. Please combine advance payments with the disbursement of November aid,” the letter urges.

The federal government announced a generous aid package for affected companies affected by the so-called “lockdown light” which was brought in at the beginning of November.

The government announced that companies would receive up to 75 percent of their earnings in the previous November.

Partial payments are already being disbursed. As of January, a new bridging aid package will apply, which will cover fixed operating costs such as rents and leases.

In view of the tougher measures to contain the pandemic, the association is also calling on Altmaier not to put retailers in a worse position.

“For constitutional reasons alone, the retail sector must not be treated differently in December aid than, for example, hotels or restaurants, which are also affected by the official closure in December,” says the letter from SME boss Markus Jerger.

The association also urged the federal government to lay out its plans for how things will continue after the hard lockdown, which has so far been limited until January 10th.