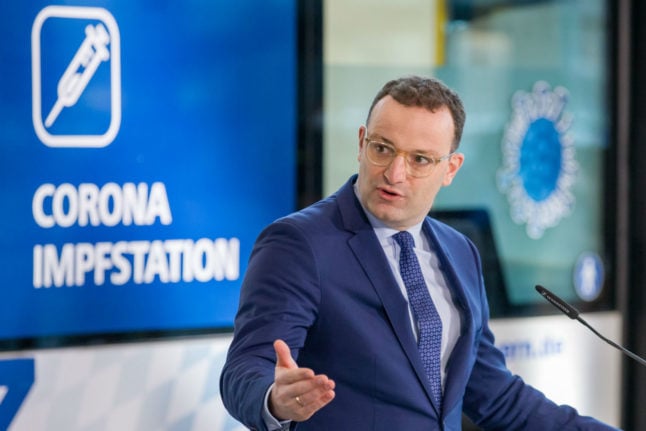 Based on the situation today, it’s likely that such a high dose would be ready and available by this point, he said on Monday evening to public broadcaster ZDF's “heute journal.”

According to experts from the World Health Organisation (WHO), a vaccination coverage rate of 60 to 70 percent of the population is necessary to effectively combat the pandemic.

“Our goal is that there will be an approval before Christmas and that we can then start vaccinating this year, also here in Germany,” said Spain from the Christian Democrats (CDU).

The European Medicines Agency (EMA) would make the final decision for approval. The Mainz-based pharmaceutical company BioNtech and its US partner Pfizer had applied to the EMA for approval of the coronavirus, and are expected to hear back by December 29th.

According to a report, however, Germany is pushing for emergency approval by December 23rd.

The fact that the vaccine co-developed in Germany can already be used in the US, Canada and the UK, but not yet in Germany, has been met with criticism.

“It cannot be that a vaccine developed in Germany can only be licensed and used in January,” said Christine Aschenberg-Dugnus, the health policy spokesperson of the Free Democrats (FDP) in the Bundestag.

“I wonder if we really need until December 29th to get approval for the vaccine in Europe. Europe should also try to create an emergency approval before then,” German Hospital Association (DKG) President Gerald Gaß told Redaktionsnetzwerk Deutschland on Tuesday morning.

“Then we could go to the nursing homes with mobile teams before Christmas and vaccinate the residents there.”

READ ALSO: Who will receive the first coronavirus vaccine jabs in Germany – and when? A woman checks into a trial coronavirus test centre set up in Mainz. Photo: DPA

Spahn has repeatedly spoken out against an emergency authorisation for Germany. From the very beginning, the country has been in favour of a proper authorisation at the European level, the CDU politician told ZDF.

“That is important for confidence from my point of view.” He said he was surprised at some very national tones from countries wanting first approval of the vaccine.

“But yes, it (vaccination) should come quickly,” he added.

According to Spahn, 12 to 13 million vaccine doses can be expected for the first quarter. If there was an additional approval from Astra Zeneca or Johnson & Johnson in this first quarter, “we would also have additional vaccine doses available”, he added. “That is quite realistic, but it is also not yet certain.”

Germany has already set up several vaccination centres around the country, and is preparing to give the most vulnerable groups, including health care workers and care home residents, the first doses of the vaccine

There are high hopes for the vaccine amid a high number of new coronavirus infections around Germany.

There were 14,432 new cases and 500 deaths within one day, the Robert Koch Institute (RKI) said on Tuesday morning.

On Tuesday of the previous week, 14,054 new infections and 423 deaths had been reported. Highs of 29,875 reported cases and 598 deaths were logged on Friday.