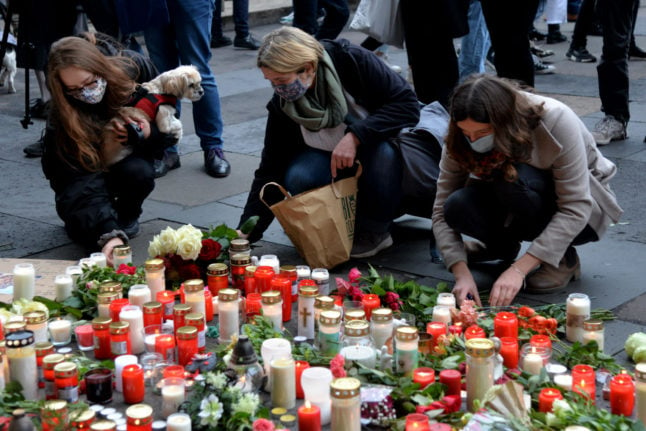 People laying tributes in Trier after five people, including a baby, were killed when an SUV was driven into a pedestrian area. Photo: DPA

Call for hotels and restaurants to reopen fully next month

Hotels and restaurants should reopen in January, according to the German Association of Towns and Municipalities.

Managing Director Gerd Landsberg told the Rheinische Post: “The closure of restaurants and hotels beyond the end of the year will be difficult to maintain for economic reasons alone.” He said this was because it “will simply be too expensive for the state” to provide aid.

Restaurants, bars, hotels and cafes have been shut since November 2nd. Exceptions include to serve takeaway food and drink, and hotels are allowed to let people stay if they are travelling for essential reasons such as business.

Landsberg said he expected the catering industry to reopen slowly from January onwards. Switzerland could serve as a model, he suggested. “There, the restaurants did not have to close fully, but instead at 9pm,” he said.

The shops in city centres “are increasingly in crisis and can hardly hold their own against online shops that are open 24 hours a day, seven days a week”, he told “Handelsblatt”: “It is right and important to allow additional 'open Sundays', at least in this crisis situation.”

People in the German city of Trier have been laying flowers, candles and teddies at the scene where five people were killed, including a baby, after a man drove a large SUV into a pedestrian area.

Prosecutor Peter Fritzen said the driver, a 51-year-old Trier native, appeared to be suffering from “psychiatric problems” and had been under the influence of alcohol while at the wheel of his silver SUV.

“My voice is failing me, thinking about the mother who has lost her child and her husband,” she said. “Never again will she hear their laughter, their voices. She will be burdened by the consequences of these four deadly minutes for the rest of her life.”

READ ALSO: Baby among the victims after car drives into shoppers in Trier Some of the tributes in Trier. Photo: DPA

As of Wednesday, tightened coronavirus measures apply in Saxony – almost throughout the entire federal state.

That's because several districts have extremely high incidence rates of Covid-19, including Bautzen and the Erzebirgkreiz, which both have more than 400 cases per 100,000 residents in seven days.

In most districts, leaving home is now only permitted for essential reasons.

According to broadcaster MDR, the stricter regulations will not apply in Dresden for the time being, because the incidence has not yet exceeded the threshold of 200 within five days.

But Saxony's premier Michael Kretschmer says there will be even tougher lockdown measures in the state if the coronavirus infection figures do not come down by Christmas.

He said if the situation doesn't improve, schools will have to remain closed after the festive holidays and shops may have to shut, too, reported NTV.

Kretschmer hopes the measures taken so far are sufficient. “It depends very much on all of us sticking to the measures, because the alternative would be a complete lockdown and a real curfew,” he said. “We want to prevent that at all costs.”

At over 200, Saxony currently has the highest rate of new infections within seven days per 100,000 inhabitants out of all German states. on December 1st, 1,576 new cases within 24 hours were reported in the state.

According to demo organiser Michael Ballweg, 22,500 participants have registered for the event, which is scheduled to take place on the afternoon of December 31st near Brandenburg Gate.

Berlin's New Year's Eve celebrations at the Brandenburg Gate have been cancelled due to the pandemic. A concert without spectators is planned to be broadcast online. People at the protest against coronavirus measures in Berlin in November. Photo: DPA

Police said they were in talks with the organisation about the demo but no concrete decisions had been made.

A recent anti-coronavirus measures rally in Berlins saw police use water canons to disperse protesters who were flouting rules by not wearing masks or keeping distance.

Querdenken or Querdenker is the umbrella group for most of the demonstrations held against government measures since the outbreak of coronavirus.

Founded in Stuttgart, it calls itself a “freedom movement” that embraces “peaceful and non-partisan” ideals and claims to have more than 100,000 supporters, including personalities such as international footballer Thomas Berthold.