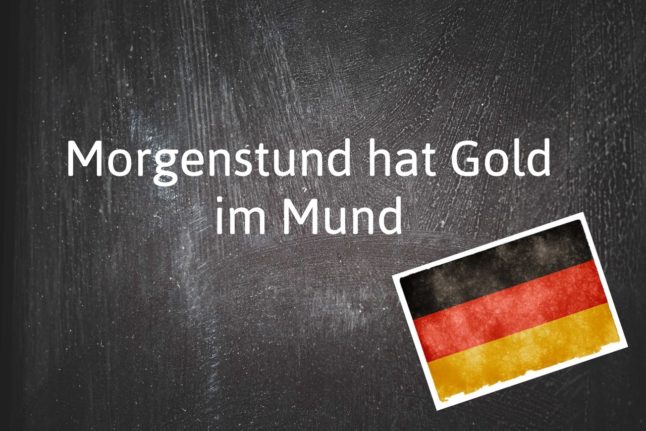 Directly translated to “The morning hour has gold in its mouth,” this phrase means that those who wake early in the morning are rich with time and opportunity.

This saying imparts the wisdom of waking up early in the morning and implies that those who do so are successful.

This phrase also exists in Dutch (“Morgenstond heeft goud in de mond”), and has a similar meaning to “Early bird catches the worm,” although the Germans have a direct translation for that as well: “Der frühe Vogel fängt den Wurm.”

‘Dawn is a friend of the muses’

Erasmus von Rotterdam, one of the most influential scholars of the northern Renaissance, wrote this phrase to encourage his students in Holland, advising that the best work one can do is often in the earliest hours of the day.

The linguistic origin of this phrase comes from the Latin “aurora habet aurum in ore.” Another similar Latin adage captures a similar message: “Aurora musis amica” translates to “Dawn is a friend of the muses.” Inspiring ideas, creativity, and productivity perhaps come to those who awake early.

An English version of this phrase was uttered often by Benjamin Franklin, founding father of the United States, who was quite famous for espousing the benefits of waking early in the morning.

This phrase also stirs up an image of a beautiful orange sunrise, one that is so beautiful that it seems as though the heavens are briefly smiling upon those who greet the day so early. A sunrise at the Kronsberg hill in Lower Saxony in late November. Photo: DPA

Getting the German sun while it lasts

Although it’s much lighter in the spring and summertime, sunlight in the wintertime can be somewhat of a rarity in a northern European country such as Germany. Anyone who has endured a German winter is well-acquainted with the trying months between fall and spring and has intimate experience with the scarcity of sun.

According to the German Weather Service, Berlin experienced an average of only 1.5 hours of sunshine per day in December 2019. If the sun actually peeks behind the layer of grey clouds that seems to cloak much of Germany throughout the winter months, it must be soaked up.

A precious hour or two of sun may indeed do wonders for one’s Vitamin D intake, and quite literally may make one feel as if they inherited gold.

Looking to soak up more German sun? It is best to head south, as the German Weather Service reports that the sunniest German states are Baden-Württemberg, Saarland, and Rhineland-Palatinate.

Yet our Western go-go-go culture may pressure you to jump start the day in the wee hours of the morning, there is absolutely no proof that waking up early actually improves productivity levels. There is, however, research that shows what makes someone an early bird or a night owl is determined by our inherited genetic material.

Science aside, mention this German phrase to your favourite early-riser and they’ll be sure to agree!

If you have a lot to do tomorrow, it is best to wake up at 5:00 am. Early bird catches the worm!

The early morning light is so beautiful and inspires me to be productive. The mornings are golden!.