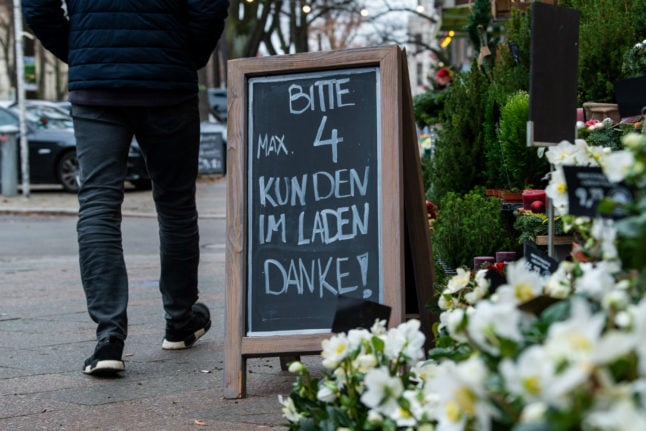 A shop in Berlin says only four customers are allowed at one time. Photo: DPA

Tougher contact restrictions with rules eased over Christmas – that's what the extended coronavirus shutdown agreed by the German government and states looks like.

Restaurants, cafes, bars, cultural and leisure facilities will remain closed (except for takeaway food or drink).

Private gatherings indoors and outdoors are now limited to a maximum of five people from your own household and one other household. Children under 14 are excluded from the rule. In November, meetings with up to 10 people from two households were generally permitted.

The extended shutdown started December 1st and will last until at least December 20th, though it's likely it will stretch into early January, Chancellor Angela Merkel said last week.

“We need a renewed effort,” Merkel stressed after the consultations with the state premiers held on Wednesday November 25th.

The extension of the measures is to try and get the number of coronavirus infections down to avoid overburdening hospitals and allow contact tracing.

“The number of patients is still rising, but not as strongly as it did a fortnight ago. If this continues, the development would be manageable for hospitals,” the President of the German Hospital Federation, Gerald Gaß, told the Passauer Neue Presse newspaper on Tuesday.

“The second wave of the pandemic is already hitting the hospitals harder. At the moment there are also more (Covid-19) patients in the regular wards.

“This is because progress in treatments is making it possible to prevent a number of coronavirus patients from coming to intensive care units and needing to be ventilated. Overall, the burden on hospitals is very high.”

More rapid tests but no free test after travel

In the fight against the pandemic, more rapid tests are to be used – in nursing homes, clinics, hospitals and, after cases of infection, also in schools.

This is provided for in a new regulation by Health Minister Jens Spahn, which is to come into force this Wednesday.

Rapid tests are available in larger quantities compared to the PCR tests, which take longer to be evaluated. Samples of rapid tests do not have to be taken to labs.

However, these antigen tests are not considered to be as accurate as PCR tests. According to the Robert Koch Institute (RKI), a positive result of a rapid test must be confirmed by a PCR test.

There are also changes to travel: people returning from coronavirus risk areas abroad will soon no longer be entitled to a free test in Germany.  The free tests will end on December 15th, DPA learned from Health Ministry circles.

What are the other changes?

The contact restrictions coming into force from Tuesday will be slightly relaxed for the days around Christmas. From December 23rd until January 1st, 10 people will be able to meet with family and friends, regardless of which household they come from.

However, some states have slightly different rules. For example in Berlin only five people can meet over the holidays. Schleswig-Holstein, on the other hand, is keeping to its max 10-person contact rule even before Christmas.

As was the case in November, schools and daycare centres (Kitas) will remain open. It was agreed that masks would be compulsory in lessons from the seventh grade onwards, depending on the regional virus numbers.

Within one day 388 people died in connection with the virus, bringing the total number of deaths to 16,636.

There have been a total of 1,067,473 confirmed coronavirus infections in Germany since the start of the pandemic.