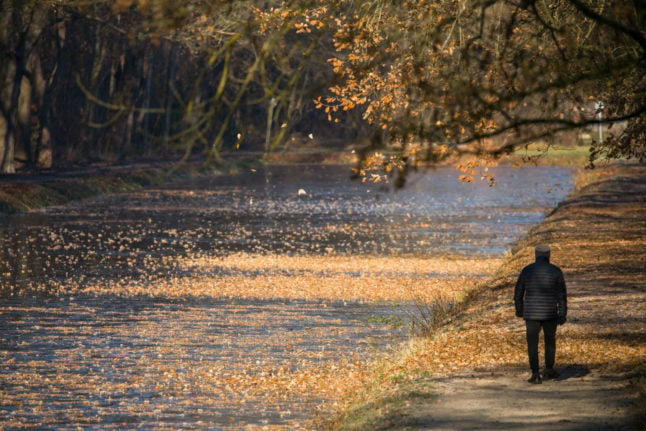 A man walking in Nuremberg on Monday. Photo: DPA

The only way is up for property prices in Germany

Despite the health crisis, prices for residential property in Germany rose more sharply in the past quarter than at any other time in nearly four years.

From July to September, houses and flats were 7.8 percent higher on average than a year earlier, according to the Federal Statistical Office. “Thus, despite the corona crisis, prices rose on average as strongly as last seen in the fourth quarter of 2016,” the office said.

At that time, prices had risen by up to 8.4 percent.

Demand for residential space is particularly strong in extended urban areas. As prices there are generally higher than in rural areas, prospective buyers are also turning to rural regions.

Experts say there is no end in sight to the upward trend.

According to the Institut der deutschen Wirtschaft Köln (IW), there are not enough homes being built in many places , which is why housing is correspondingly scarce and expensive. In addition, many institutional investors are shifting their money and are looking at real estate to maintain value, which also drives prices up.

Social distancing, hand-washing and obligatory face masks were measures brought in to Germany months ago to deal with the coronavirus pandemic. However, a new study has found these measures have also cut cases of cold weather illnesses by up to 50 percent.

Instances of flu, bronchitis and pneumonia have all significantly decreased in north-eastern Germany, which includes Berlin, according to a study by health insurer AOK Nordost.

Meanwhile, the number of people taking sick days off work from September until mid-November due to flu was halved compared to previous years.

The authors said this was likely due to ongoing coronavirus restrictions.

The study, which was released on Sunday, took into account more than 63,000 sick leave requests throughout autumn in the north-eastern German states of Berlin, Brandenberg and Mecklenburg-Western Pomerania. The three states are home to just over 7.5 million people.

This is Germany's current coronavirus hotspot

The number of new infections are continuing to rise in the city of Passau, Bavaria.

According to the Robert Koch Institute, the city has clocked up an average of 579.5 new infections per 100,000 residents in seven days – the highest number in Germany. The district of Passau also has high figures.

Hildburghausen in Thuringia has the second worst number of cases, according to the RKI, with an incidence of 579.1.

The Lower Bavarian districts of Regen (377.2), the district of Passau (360.2) and the city of Nuremberg (307.3) are also among the ten cities and districts with the highest 7-day incidence values.

A strict lockdown has been in force in the city of Passau since Saturday. Residents there can only leave their homes for essential reasons.  It is also forbidden to drink alcohol in public places.

The exit restrictions in Passau will initially apply for one week. The restrictions could be relaxed again at the earliest when the number of infections drops to an incidence of 300, mayor Jürgen Dupper (SPD) told BR. We love this photo by Thomas Frey for DPA of two red pandas on a branch at the zoo in Neuwied, Rhineland-Palatinate. Almost all zoos across the country have been closed due to the pandemic measures.

Compared to other countries, daycare centre (Kita) staff in Germany are exposed to higher levels of stress. That's according to a study by the Organisation for Economic Cooperation and Development (OECD), reported the Süddeutsche Zeitung on Monday.

More than 3,000 staff members in Germany took part in the study, which aims to raise the quality of education and in child care centres. The data was collected in 2018 – before the coronavirus pandemic.

The study states that Germany is one of the best countries in terms of the training of its nursery staff thanks to its “solid focus on pre-vocational education”.

They also said there was a shortage of staff and this raised stress levels.

Compared to other countries, the percentage of Kita staff in Germany who have been considering giving up their jobs due to health problems is very high. About a quarter of Kita workers said that they were toying with the idea of leaving. This could indicate a possible burn-out risk, the study found.