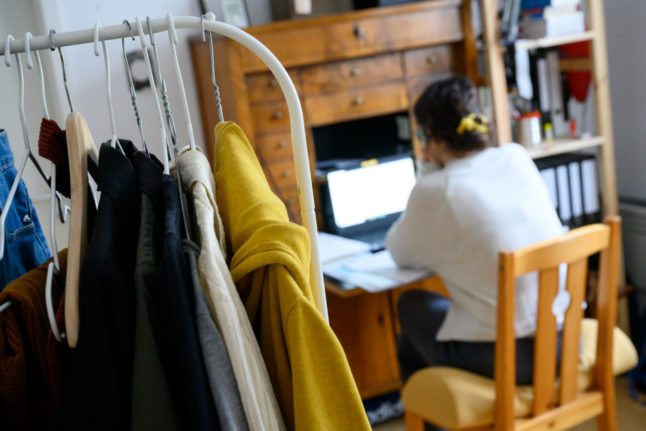 A woman in Stuttgart working in her Home Office. Photo: DPA

Employees should also be entitled to the right to discuss working remotely with their employer, according to the draft for the “Mobile Work Act”, which DPA acquired on Monday from government circles.

Employers can then either accept or reject the proposal –  but if the latter, they should have to give reasons in writing within two months at the latest.

The law – originally presented at the beginning of October – is currently being voted on in Germany's parliament.

Will there be a limit to how long employees can work from home?

Originally Heil pushed for employees to be able to work 24 days a year from home when there were no operational reasons against it, yet now there is no limit on number of days.

However, employees who wish to work remotely on a regular basis would have to inform the employer of the start, duration, extent and distribution of mobile work at least three months in advance.

Work should therefore be able to be carried out at locations of choice, but agreed upon with the employer.

“The Federal Government and Germany’s states are currently calling for employees to work from home wherever possible now”, Heil told DPA.  “The time has now come to create a sensible and modern regulatory framework for this.”

“If you drive to work today, take your child to the Kita and continue from the Kita to your workplace, you are covered by accident insurance because it is a commute to work,” he explained.

Those who bring their child to the Kita and then drive to Home Office officially are not going to work, and are hence not covered.  “That is not okay,” said Heil. A women working in her Home Office in Berlin. Photo: DPA

“Travel to and from childcare facilities is also to be covered.”

In addition, according to the draft, occupational safety protection (Arbeitsshutz) should also be available in the Home Office.

In Germany, a Feierabend is a sacred time after work, when employees can head home and not worry about any work-related responsibilities. But what happens when the office is also where a person spends their free time?

Heil wants the entire working time to be recorded every day so that boundaries are not crossed.

He said that Home Office should not lead to the dissolution of the boundaries between work and private life.

“In the Home Office, too, there should be Feierabend.”

READ ALSO: Why every country should get on board with the German Feierabend

Heil was also optimistic about being able to reduce the tax and expenses burden on those who work from home.

Currently a person who has an extra room devoted to being an office can deduct it for tax purposes. “But who has that? Very few people do,” said Heil.

“A lump sum is an uncomplicated and good possible way,” he said.

On Monday, politicians from Germany's Grand Coalition negotiated tax breaks for employees who have to move to the Home Office because of coronavirus.

Specifically, this involves a so-called home office flat rate which can be claimed against tax and thus reduces the tax burden.

According to the financial policy spokesman of the SPD parliamentary group, Lothar Binding, this should amount to €5 euros per home working day, but a maximum of €500 per year. The regulation will initially be limited to two years.

According to the Federal Minister of Finance, Olaf Scholz (SPD), the planned flat-rate Home Office allowance for employees working from home will not add up to any major additional costs.

Scholz said that savings would come elsewhere, as “employees who work at home and benefit from the flat rate would not be able to claim any costs for the journey to work (under travel expenses)”.

Yet Home Office is not for everyone, said Heil. “If you work in a steel mill or bake bread and rolls, of course you can't do it from home”.

In other professions, however, he expects people to work from home even after the pandemic.

“This saves stress in traffic jams and allows more time with the family,” he said.

But many employees also wanted to work physically with their colleagues.

Therefore, said Heil: “This possibility of Home Office should only be created where it is operationally possible and where it is wanted”.