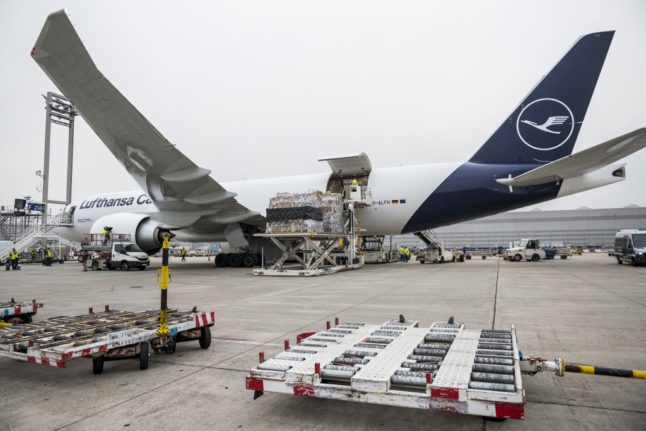 Cargo is loaded into a Lufthansa Cargo aircraft at Frankfurt Airport, in Frankfurt am Main, western Germany, on November 25, 2020: AFP

Frankfurt is Europe's largest hub for transporting pharmaceutical goods, and will be key to the success of inoculating millions of people against the coronavirus.

“The stress is increasing now that we're entering the 'hot' phase,” Karin Krestan, Lufthansa Cargo's director of operations, told AFP during a tour of the temperature-controlled “Cargo Cool Center” terminal. Krestan, who uses her skills as a former nurse, is sure her team is ready for the task. “The processes have been established, we're very confident and we feel well prepared,” she said. Max Philipp Conrady, head of freight infrastructure at airport operator Fraport, poses in front of special cooling containers whose temperature can be regulated from minus 20 degrees Celsius to 30 degrees plus, at Frankfurt Airport, in Frankfurt am Main, western Germany, on November 25, 2020. Thomas Lohnes / AFP

Frankfurt's cargo terminal has been working around the clock since the pandemic began, delivering medicine, surgical gowns and masks and supporting global supply chains as passenger numbers collapsed and airlines grounded planes.

The vast temperature-controlled hangar, a few kilometres from the main passenger terminal, handled 120,000 tons of vaccines, drugs and other pharmaceutical products in 2019, airport operator Fraport said.

It has 12,000 square metres (129,000 square feet) of temperature-controlled warehouses, essential for storing medicines. The manager of the Lufthansa Pharma Hub at Frankfurt Airport stands in front of a cargo of measles vaccine from India in a temperature-controlled hangar at about 5 degrees Celcius at Frankfurt Airport, in Frankfurt am Main, western Germany, on November 25, 2020.  Thomas Lohnes / AFP

Frankfurt has 2,000 square metres (21,500 square feet) of cold storage, Krestan said, set at two to eight degrees Celsius (36 to 47 degrees Fahrenheit), which is ideal for vaccines.

Fraport recently boosted investment in high-tech refrigerated “dollies” that transport vaccines from cold-storage hangars to planes, and now have 20 so several freighters can be loaded at the same time.

Some vaccines, such as one produced by AstraZeneca and Oxford University, can be shipped at normal refrigerator temperatures.

But Pfizer's, developed at the BioNTech lab in Mainz, around 20km (12 miles) from the Frankfurt airport, must remain at around -70 degrees C (-94 F).

That requires car-sized containers which use dry ice to keep contents at stable, ultra-low temperatures.

They can do so for up to 120 hours without a power supply, long enough to reach far-flung destinations. The EU recently agreed to buy 300 million doses of the Pfizer/BioNTech vaccine, presaging a huge logistical operation, much of which will involve Frankfurt in the coming months.

While the airport has the capacity to handle the extra-cold freight, Krestan noted that flight capacity will be a major factor in the pace of distribution.

Cargo planes can normally carry up to a million doses, unless sub-zero temperatures must be maintained. Cargo is loaded into a Lufthansa Cargo aircraft at Frankfurt Airport, in Frankfurt am Main, western Germany, on November 25, 2020. Thomas Lohnes / AFP

Adding to the challenge, 40 percent of annual global air cargo is typically carried by passenger aircraft, which have been vastly curtailed due to the pandemic.

A study commissioned by DHL estimates that 15,000 flights would be necessary to transport 10 billion doses.

Fraport is in communication with manufacturers “to see how we can optimise traffic”, Conrady said.

A lot rides on the operation's success, especially at hubs such as Frankfurt. Without swift and global inoculations, the air transport sector will lack the passenger numbers it needs to stay aloft.