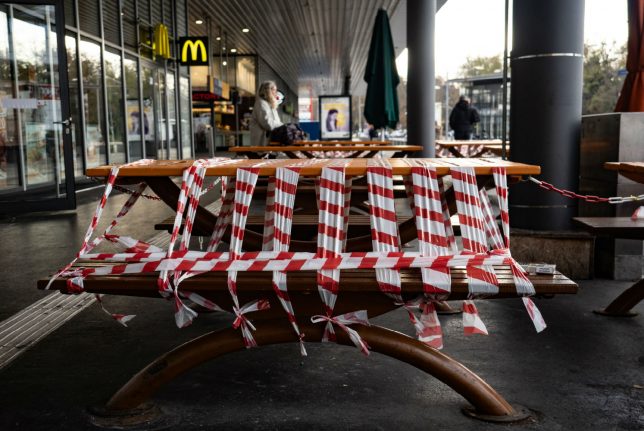 A taped off table outside a restaurant in Berlin on Friday. Restaurants can only open for takeaway in November. Photo: DPA

Will the lockdown light be eased earlier than planned?

Germany is about half way through the partial lockdown, put in place to try and slow down the spread of coronavirus.

Merkel and the premiers of Germany's 16 states are to meet on Monday to review the situation and measures.

And, not surprisingly, it looks like there are no plans to ease the restrictions before the end of the month.

“On behalf of the German government, I can say that, given this state of affairs, no easing of restrictions is to be expected on Monday in any case,” said Merkel's spokesman Steffen Seibert on Friday in Berlin.

The current measures, which came into force on November 2nd, mean that bars, restaurants, cafes, gyms and cultural facilities have closed (except for takeaway). There are also tougher contact restrictions. The plan is to keep these measures in place until at least November 30th.

READ ALSO: 'Makes no sense': What do people in Germany think about the bar and restaurant shutdown?

According to Seibert, it remains unclear whether tougher measures will be considered necessary.

Despite signs of improvement, Germany reported 23,542 coronavirus infections within 24 hours on Friday, the highest number since the start of the pandemic.

Seibert pointed out that more people are becoming infected with the virus in Germany. “The rise in numbers has flattened out, but they are still rising,” he said.

He said the country had to wait and see how the measures worked. “Every day counts,” he said. “It is too early to make a final judgement.” By easing the restrictions, the country risks seeing rising infection rates,” he added.

As The Local has been reporting, politicians and experts are also looking to the intensive care unit situation in Germany.

There's a rising number of Covid-19 patients going into hospitals, putting pressure on the health care system, and there are concerns that things could get worse.

READ ALSO: How serious is the Covid-19 situation in Germany's hospitals?

What is the goal?

Germany is aiming to get closer to a seven-day incidence rate of 50 new infections per 100,000 residents. This number has been well over 130 for several days.

It's only when it drops down to around 50 that it will become possible for health authorities to trace individual contacts of infected people again, said Seibert.

Seibert recalled a sentence said by Merkel: “It should not be a lonely Christmas.” To achieve this, however, it was the responsibility of each individual, he added.

According to Seibert, it remains to be seen whether the situation in schools will play a role in the consultations on Monday.

If the situation is getting worse, there could be an option to shut schools for a period of time. But the federal government has always said it aims to keep schools open as much as possible.

As The Local reported Thursday, over 3,000 schools around Germany have already temporarily closed due to quarantine measures.

Bavaria's state premier Markus Söder said on Friday: “Our goal must be to get below the seven-day incidence of 50.”

Will measures be extended in December?

We don't know yet.

Federal Health Minister Jens Spahn, of the Christian Democrats (CDU), said it's too early to predict whether the tougher coronavirus requirements imposed for November can actually be relaxed in December.

“Actually, it is too early to assess this now,” he said to broadcaster ARD's “Morgenmagazin” on Friday.

Spahn said that it will become clearer if the current partial lockdown has made a difference “in the next few days”.

The increase in the number of new coronavirus infections has “declined sharply”. However, the total number of infections continues to rise. “We have to go down. We are not there yet,” warned Spahn.

Spahn emphasised that even if the number of infections decreased, things would still be difficult in December.

For example, work Christmas parties, birthdays and wedding celebrations would not be able to go ahead in large numbers.

“We will certainly have to keep this up (tough measures) in winter,” he predicted. “One thing we never said is that November would be hard and then everything would be the same as before.” But the aim is to make more things possible again, said Spahn.