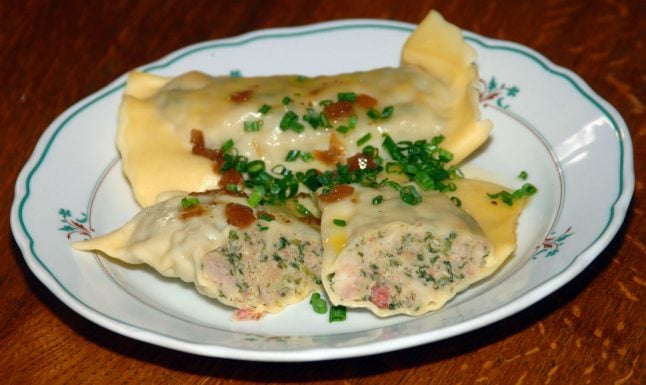 Maultaschen prepared with the traditional ingredients and garnish. Photo: DPA

Astronaut Alexander Gerst did not have to go without his local food in space: when he was onboard the ISS space station in 2018, Maultaschen were served. The Swabian dumpling has long been popular, especially in southern Germany.

The most important and well-known Maultaschen-makers are located in the south of Germany. Market leader Bürger is located in Ditzingen in the district of Ludwigsburg. Rehm Meat Products is housed in Aichwald in the Esslingen district, and Settele is in Neu-Ulm, Bavaria, bordering Baden-Württemberg.

During the first phase of the coronavirus pandemic, in addition to toilet paper and frozen pizza, the filled dumplings experienced an increased demand.

“We noticed it in March,” said Bürger CEO Martin Bihlmaier. There is now a normal demand again. It did not change in the beginning of November, as stricter lockdown rules came into effect throughout Germany as coronavirus cases continued to rise sharply. Since then, no one is allowed to sit in restaurants and cafes, at least until the end of the month.

Coronavirus was a catalyst for the rising demand for convenience products, like Maultaschen, said the Settele spokeswoman. According to the Bürger, every consumer in Germany eats an average of seven such dumplings a year (those in Baden-Württemberg eat around 32 pieces), regardless of whether they are cooked in broth, fired in a pan with onions, or cut into strips and topped with an egg.

“The Maultaschen is a regional good, but it is being sold more and more in the North,” said Frank Roth, managing director of the Rehm Meat Products Company. The Settele spokeswoman added that Maultauschen are becoming more popular in major cities like Hamburg and Berlin. “There are many Swabians in exile in Berlin,” said Bihlmaier, explaining that the dish is often served in cafeterias in large university towns. There is a clear urban-rural divide.

Bürger relies on poster and radio advertising, which allows them to advertise very specifically in each region. In 2019, with a staff of 1,000 employees, Bürger produced 81,900 tons of food, ranging from egg noodles, potato noodles, gnocchi, and of course Maultaschen.

Of these 30,000 products were made, which resulted in €223.5 million in earnings. The dumplings account for half of the total revenue. In 2020 the industry leader expects far lower sales as business with canteens and cafeterias has declined due to the Coronavirus pandemic. These deficits cannot be absorbed by the food retail sector.

The European Union granted the Swabian favourite the highest level of protection in 2009. Since then, dumplings have been recognised as a regional speciality.

The authentic Swabian Maultaschen, which are filled with sausage meat, eggs, bread, parsley, onions, and leeks, are therefore only allowed to come from Baden-Württemberg and the Bavarian administrative district of Swabia. Bürger does not produce their goods in Ditzingen, but rather in Crailsheim.

A full 2.5 million Maultaschen are produced everyday. The dough is first rolled out to make it very thin, and is then cut into four strips.

Sausage meat is then added. The filling is finished by adding parsley and spinach, creating little green sprinkles throughout the meat mixture. A Bürger employee prepares the Maultaschen for packaging. Photo: DPA

The dough is then fastened around the filling, and the dumplings are put in the steamer for 20 minutes. They are then finally packed. The production takes several hours.

The classic Maultaschen, stuffed with pork, is still the most popular, says the 47-year-old Bihlmaier. But there is a wide variety of dumplings: with beef, as well as without, for vegetarians and vegans. Settele relayed that they are “satisfied with the development” of the meat-free products. Like Rehm, Settele did not provide any revenue information from his company of about 100 employees.

Maultaschen are not only sold in Germany, as some manufacturers are also active with customers abroad. However, they have not yet made it into space. Currently the Lufthansa catering subsidiary, LSG Group, is responsible for airplane food offerings.