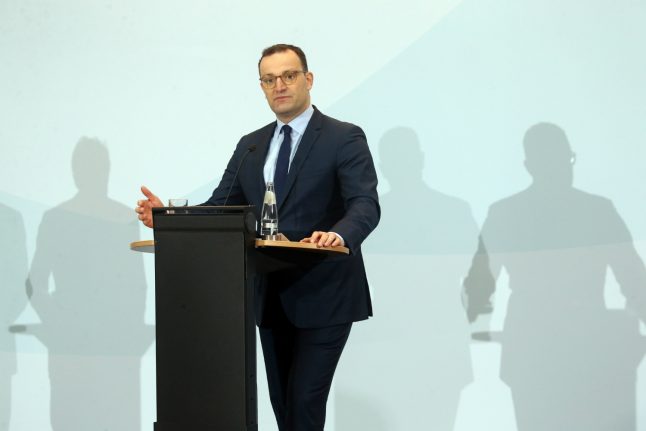 “What we are seeing is that the momentum has slowed down considerably in the last few days,” said Spahn on Wednesday to German broadcasters.

“It is still rising, but it is rising less strongly. This is encouraging at first, but it is not enough.”

Spahn said that after two or three days of positive development it's still too early to speak of a “turnaround”.

“These are definitely signs of change, but not yet a trend reversal,” the Christian Democrat (CDU) politician said.

The Minister also referred to the increasing number of coronavirus patients in intensive care units and the rising number of deaths. In order to get a grip on this, the infection figures have go go down.

READ ALSO: How close is Germany to receiving a Covid-19 vaccination?

According to the latest data from the Robert Koch Institute (RKI) on Wednesday, 18,487 new corona infections were reported nationwide within 24 hours.

That is 3,155 more cases than on Tuesday. Compared to Wednesday last week, the figure is slightly higher. At that time the number of reported new infections was 17,214. A record peak was reached on Saturday with 23,399 cases reported.

The nationwide 7-day incidence of new corona infections has fallen slightly for the first time since the decision to impose a new lockdown.

While the incidence rate was 94 new infections per 100,000 inhabitants in seven days on the day of the lockdown decision at the end of October, it has risen steadily since then, reaching a peak of 139.1 on Tuesday.

Now the increase has stopped for the first time, falling slightly to 138.1 on Wednesday. The government's aim is to bring the incidence rate back down to below 50.

The number of deaths related to the virus rose by 261 to a total of 11,767 by Wednesday. There were 154 deaths reported within 24 hours on Tuesday. The RKI estimates that around 454,800 people have now recovered from Covid-19.

There is a partial shutdown across Germany during November in a bid to get the coronavirus numbers down. Restaurants, bars, cafes, gyms and cultural facilities are all closed until the end of the month, and contact restrictions are in place.

EXPLAINED: What closes and stays open across Germany's states?

Christmas holidays may be extended in NRW

Meanwhile, Armin Laschet, state premier of North Rhine-Westphalia, has proposed extending the Christmas holidays in the western state. In return, the two days off for carnival would be cancelled.

This is a “conceivable possibility”, Laschet said on WDR television.

In concrete terms this would mean that the school holidays would not begin on December 23rd – but on Monday December 21st.

The state government will discuss this with various associations, said Laschet. The idea is that this would limit contacts more before Christmas.

“However, this does not provide any security either,” stressed Laschet.

Spahn said this idea was a welcome part of the debate.  He did however stress that there is no scope for larger Christmas celebrations this year.